Laid Off Teacher from Texas Speaks

RUSH: Lo and behold, I just pointed out if we pop our head into any school economics class, we would be shocked and saddened by what we hear. Cookie informs me that we have just such a teacher. Last night on Sergeant Schultz’s show, on MSNBC, a woman that Obama introduced in his speech on the American Jobs Act in Mesquite, Texas. She’s the laid-off teacher. Her name is Kim Russell. And Sergeant Schultz said to the laid-off teacher that was part of Obama’s speech yesterday, “I gotta ask you, how do you feel about what’s taken place in this country right now where there can be an investment in jobs and it doesn’t appear to be happening?”

RUSH: Stop the tape a minute. I want to reemphasize, this woman is a teacher. I don’t know what grade, but she is a teacher of children. 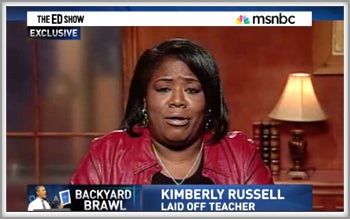 RUSSELL: — being a — a — a teacher just in general, you teach your kids always to get the best education possible ’cause — because they can be who or whatever they want to be.

RUSH: Wait a minute, wait a minute, stop. Now, I’m sorry. I parse words. I mean I’m a wordologist. Words are my business, so I listen very carefully to the words other people use. Now, you might think I’m nitpicking here, but she just said, “In general you teach your kids always to get the best education possible.” So in her class where kids are ostensibly getting the best education possible, that’s what she’s telling them? And remember, you gotta get the best education possible, while they’re being educated, she says that. I wonder how many students say, “Yeah, and it ain’t happening here.” Go back to the top of the bite, and I will not interrupt the rest of it. This is a woman, I don’t know what she teaches. It doesn’t say here what she teaches and maybe nobody knows. But she is a teacher.

RUSSELL: I’m very disappointed. Being a — a — a teacher just in general you teach your kids always to get the best education possible ’cause — because they can be who or whatever they want to be. Being a government and economics teacher, I teach them that America is one of the most thriving countries and — and, you know, and innovative countries in the world, and that every — you know, basically every other country wants to have basically the type of — of government, economic system we have. And then I have to turn around and say, but, you know what? At this point now we’re at a — a — in a position where we’ve never seen this type of thing before, where there are positions of police, nurses, teachers.

RUSH: We’ve never seen this type of thing before where there are positions of police, nurses, and teachers. I guess she means not working. So she teaches government and economics. Right. And she also teaches how important it is to go to get a good education. She said that. Teaches that. Teach your kids always to get the best education possible. Texas. Lives in Mesquite, Texas. Obama used her. She was one of the props on stage yesterday, an unemployed teacher. He brought her up on stage, (imitating Obama) “This is the kind of woman, my jobs bill, put her back to work, along with millions of other people, and if they cross a bridge on the way to work, that bridge ain’t gonna fall down if you pass this bill now.” And of course the only reason that the bridges are gonna fall is because the Republicans want ’em to. That’s right. The Republicans have probably snuck over to some of these bridges and put dynamite underneath ’em. That’s the next thing that we’re gonna hear. Make this woman senior staff. Take her on the next Moochelle vacation or have her go along with you on the next shopping trip to Target. Tutor the kids. There you go. Tutor the kids.

John in his truck on I-40 in Arkansas. Welcome to the EIB Network, sir. Hi.

CALLER: Hey, Rush. Hey listen, I just wanted to say that each truck out here spends, our company spends $4,500 a year on their units. Our company has 1,500 units. That’s $6,750,000 a year that they pay to the federal government. Now, that’s supposed to go to the government, they’re supposed to divvy it to the states, states are supposed to divvy it to the county. So the infrastructure that’s not getting done, I’d just like to know where the money goes.

RUSH: You know, you have asked the single best question of the day. Tax revenue in this country generates $3 trillion a year. We spend four and a half trillion, so a trillion and a half that we don’t have. The government raises three trillion, and we’re spending four and a half, and the idea that we’re short on infrastructure, that we’re short on funds for education, we are not short on anything. This is not a money problem. We don’t need the guy at Starbucks passing a cup for five bucks. We don’t need Tweet for Jobs, and we don’t need these idiot Democrat senators raising taxes on millionaires and billionaires and corporate jet owners to fund job creation. We need these people to take a permanent vacation and just stop doing what they’re doing. The amount of money that this country has, the amount of money the states have, you would be stunned to learn, we all would be stunned to learn where so much of that money is going. And I mean into the back pockets of individuals, and pensions, 30-year pensions and lifetime health care for people who worked for ten years, that kind of thing.