RUSH: I think, folks, the regime wants to run against Mitt Romney. That’s what I think. Here’s what I’m thinking. When do you think these Astroturf protests were first talked about, this Occupy Wall Street thing? How long have they been in the works, do you think? I have been asking myself this, ’cause this is not spontaneous eruption here. This is a well thought out plan. It’s just like remember back during the debate on an illegal immigration bill miraculously something like a million people showed up someplace or a hundred thousand showed up in Los Angeles or wherever, and we were told, “Yeah, that’s genuine passion out there.” No. It was all structured. It was organized. Just as this is. (interruption) What did you say? Pretty low turnout? You think it’s low turnout if it’s organized? Well, that’s ’cause they haven’t made enough sleeping bags yet. Yeah, there’s only 250 people sleeping there at night. That’s ’cause they refuse to buy, they’re not gonna engage in capitalism. Five hundred during the day, is that all? Because it’s being made to look like 50,000, some of these aerial shots it’s being made to look like 50,000. I still say it’s organized. 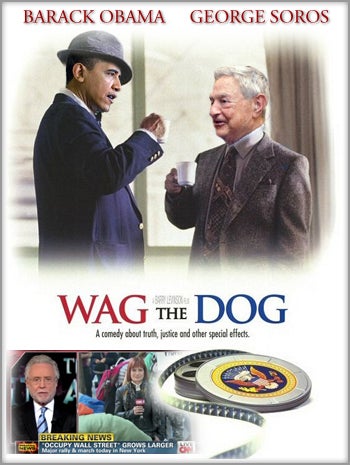 There’s no question it’s organized, and if all they can drum up is 500 people, then the whole thing’s a sham anyway. Now we gotta wonder how many people are being paid to show up down there. There’s George Soros money behind this. (interruption) Forget the numbers. Don’t sidetrack me here because I got a brilliant point. What do you think spawned this? How long have these protests been talked about? Three months ago? Five months ago? Who has been the leading Republican for most of the primary season until the debates? Romney. Exactly right. Perry was a recent entrant. Bachmann was a surprise winner in the Hawkeye straw poll. You talk to people today, Romney is the de facto nominee. In fact, there are people within the Republican establishment, I can tell you this, who are trying to convince others, since Bill Kristol struck out on Chris Christie, they’re throwing in the towel, and they’re running around and they’re trying to get everybody, “Okay, can we pick Mitt now, everybody unify, we gotta unify, we gotta pick somebody, do it now, do it early and get behind them a hundred percent.”

There’s a movement on now to just basically give this thing to Romney. People are trying to persuade others in the conservative political and media establishments, “You know, forget the debates, they’re gonna happen, but it’s Mitt. It’s Mitt, we gotta get unified, we don’t want what happened last time in 2008,” and so it’s always been presumed that Romney was going to be the nominee. And there’s an interesting coincidence. Romney is Wall Street. Bain Capital, hedge fund, I think it was, some kind of investment firm. Romney founded it. Now, Romney’s been the odds on favorite ’til Perry got in and it looks like Romney may be back on top now. You had Herman Cain, a recent gainer in the polling data. But you note there hasn’t been any media hits on Romney. There been all kinds of media hits on Perry. A lot of media hits on Bachmann. A lot of media hits even on Herman Cain now.

There aren’t any media hits on Romney. Have you noticed this? (interruption) Well, have I missed some? There aren’t any media hits on Romney. Yeah, they’re letting him go. He’s untouched. He’s unscathed. Now, I have been thinking a lot about Wag the Dog. I bought that movie about a month ago because I hadn’t seen it in a long time. We had a caller who suggested that some things happening at the time, I forget what, reminded him of Wag the Dog, and I knew Wag the Dog was the phony creation of a war using television to convince people that a war was going on so they’d support it, fund it, and help an incumbent president get reelected by defending the country, showing the flag and this kind of thing. But there was no war, it was all fake.

I remember there was a scene, some Secret Service agents or Department of Justice officials are following Robert De Niro around. De Niro is the director of the war, and they follow him I think into a coffee shop and say, “Okay, look, it was fun for a while, but we’re not the war.” The United States is not the war and whatever fake country it was; and De Niro said, “Of course we are! I saw it on TV this morning.” “Now, you know there’s no war.” “What do you mean there’s no war? We got T-shirts, people are wearing T-shirts, people are carrying signs, people are waving the flag. I saw it on TV! You tell me there’s no war going on? It’s on television every day.” (laughing) So I got to thinking here a lot about Wag the Dog, ’cause I think this Wall Street thing’s been cooking for a while.

It’s not organic. It has a purpose, and what would be a fleshed out script if this were a Wag the Dog kind of thing. “Bigger than just the Tea Party” would have to be a part of it. It’d have to be bigger than the Tea Party. You’d have to treat it with far more reverence and respect than the Tea Party. It’d have to be going on in a lot of cities and have the illusion that it is spreading. It starts in Wall Street, then next place it’s in Detroit, then LA; then the next day even Washington, and the illusion that it’s growing is created. All you need’s 250 people and a compliant media, and as far as we’re concerned on TV, there’s a giant protest going on. But as you point out: In terms of real numbers it isn’t giant. But the media is acting like, “Oh, huge numbers of disaffected, disappointed people!”

The one thing they forgot was to recruit some minorities. This is 99% white and people starting to ask questions, “Where’s the diversity?” So it’s bigger than the Tea Party. Its purpose is to reelect Obama. He needs crowds. They need it. He’s not drawing enthusiastic crowds when he speaks anymore. He’s got another bus tour. He’s going back to North Carolina, going back to those 153 bridges that are about to collapse. He’s gonna go to Virginia on the bus tour. As F. Chuck Todd said… You shoulda seen F. Chuck Todd asking this question. F. Chuck Todd’s in the front row, and you gotta give him credit. He asked the question, but, boy, he looked embarrassed and scared and like he wanted to run out of there as soon as he finished. Basically what he asked him was, “Are you concerned people aren’t listening to you anymore? I mean, you’re asking to call Congress but nobody’s calling Congress. I talked to people and the phones aren’t ringing. Are you worried about that?”

So they gotta create this. They gotta create the illusion that these protests are big, filled with energy, and for Obama. Because nothing is happening spontaneously. No knockout stories of Romney. The smear of Perry is no accident. Protests are needed ’cause the economy sucks, and these washouts would normally be protesting a Republican president who was responsible. Now they’re targeting “Wall Street” as if Wall Street’s responsible for the failure of Obama’s policies. That’s my point: They’re trying to blame the rich for these economic problems when it’s Obama and they’re targeting Romney as a Wall Street guy. So I think part of the reason this was concocted was to take Romney out after seeing to it that he’s the nominee.