What’s Joe Got Against the Jets?

RUSH: There’s something happening in the National Football League that intrigues me. Joe Namath is ragging on the Jets at least two times a week and I’m trying to figure out why. Somebody in the Jets organization had to do something to Joe Namath ’cause Joe Namath is out there pulverizing the Jets. He’s pulverizing draft choices, the front office, the way they’re handling the quarterback, Mark Sanchez. (interruption) Well, no, he’s not ripping players. He’s ripping coaches and the front office. Every time he shows up in the media he’s got a new dig at the Jets. 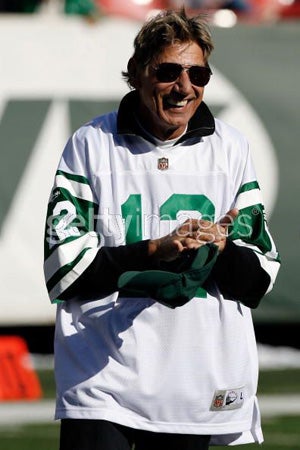 Now, Rex Ryan, the coach of the Jets, said, (paraphrasing) “I’m sorry, maybe Joe could be our second string quarterback, come in here and tell us how to do this.” (laughing) You know, training camp, apparently Namath shows up every year. The last time the Jets did anything with Namath, what was it, the sixties, Super Bowl III. That’s a long time ago. But Namath shows up at training camp every year to survey the scene, see what’s going on as though he never left the team. It’s interesting. I can just bet you that when they see Namath’s car arriving, “Oh, God, here he comes. We gotta act like we care what he thinks, ah, jeez, old Mr. Jet, the only guy that’s won a Super Bowl, the albatross around our necks,” he comes in, he surveys things, and he leaves. He’s ragging on the team. (laughing) I don’t know, I think it’s funny. I don’t know what it is. It has to be something the Jets did that ticked off Namath, ’cause every time he’s opening his mouth he’s speaking up.