A Preview of the GOP Debate

RUSH: Here’s Jay on the road in Ohio. Great to have you on the EIB Network. Hello.

CALLER: Hey, Rush, mega dittos, been with you since Desert Shield. You gotta bear with me, I’m a little nervous here.

RUSH: No, no need to be nervous. You don’t even sound it. Wouldn’t have known it if you hadn’t said so.

CALLER: I was stumbling, stammering, whatever, but I want you to handicap the debate tonight. Is it gonna be a gang-up on Herman Cain, and if so does that not play into Herman Cain’s benefit and an over-under on the number of times 999 will be mentioned tonight. 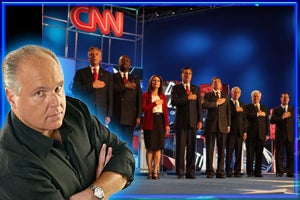 RUSH: Well, it’s a CNN debate, and they’re worried at CNN, they got a poll that shows Republican energy and enthusiasm to vote is twice as high as Democrat energy. So their objective at CNN is going to be to make every one of these people look like an absolute wacko nutcase fruitcake. The Republicans on stage will go after Herman Cain and his 999 plan, and Herman Cain will not budge. One thing about Herman Cain is he’s unflappable. Ron Paul tonight is expected to announce his Draconian $1 trillion in spending cuts. But in terms of handicapping how this thing is gonna go, I’ve long given up predicting outcomes here as to who’s gonna win or who’s gonna show well ’cause I always end up being surprised by something that happens. I don’t think you can imagine every possible thing that could happen, event that could take place, question that could be asked, a stupid answer in response. There’s too many variables here. But you do know that they’re gonna go after Herman Cain.

CALLER: My impression is the more times they come after Herman Cain and this 999 the higher he goes in the polls.

In the last debate I was shocked with all of the evidence available, that nobody went after Romney for his advisors helping to craft Obamacare in the Oval Office. Since it didn’t happen last time when the news was fresh, that day or the day before, I don’t think it’s gonna happen tonight, either. Because Newt knew about it, Bachmann knew about it, Santorum, they all knew about it and they chose not to hit Romney on it. And there are many reasons why. Maybe they all think that they’re vulnerable to attack in other areas if they bring that up.

Maybe they have done things behind the scenes that nobody knows about to advance government-run health care that they don’t want anybody to know they’ve been involved in. And that Romney knows it and if they go after him all he’s gotta do is say, “Newt, you know, I remember when you took 300 grand to lobby for whatever.” I’m making that up; I’m just saying there’s a reason why these guys are not going after Romney on this. There has to be. Some of them might be trying to hide things that they’ve done that they wish don’t come out. But one thing we know: It’s a CNN debate, and so the objective here is gonna be to make this look like the Star Wars bar scene. That you can count on.

RUSH: And of course there’s another reason why some of these candidates might not want to attack Romney. That would take ’em out of the vice presidential running as well. It’s a possible explanation.