The GOP Debate Made Me Laugh

RUSH: Dick, St. Joseph, Missouri, great to have you on the EIB Network. Hello, sir.

CALLER: Rush, it’s an honor and a pleasure, I am amazed every day I listen. Your brain is a vacuum. My question, Rush, I’ve heard you say and others that the 2012 election could be a slam dunk. And my question is —

RUSH: A year from now.

CALLER: That goes along with my question then: Are the Republicans going to shoot themselves in the foot with continued debates —

RUSH: Ah, no, no, no. This stuff’s gonna be long forgotten. Right now this is cool. There’s one sad aspect. These debates are getting higher ratings than any debates like this ever have. And the reason that that’s sad is that they started out great. I remember the first couple of these debates it was nothing but conservatism on parade, every one of these candidates except for Ron Paul who’s Libertarian, a couple of moderates, were just really doing great, articulating conservatism. Now, as the debates have gone on, less and less of that’s happened, and that’s a shame because there’s such an opportunity here with more and more people watching to teach, to explain, to confirm, to validate. This is the greatest thing that could happen, have somebody be unabashedly, cheerfully conservative, and you would validate so many people in the audience ’cause that’s how they think, that’s how they live their lives. These debates right now, they’re not gonna have an impact on the election.

RUSH: If the election were tomorrow, any of these Republicans would beat Obama.

RUSH: I’m telling you. If the election were tomorrow, any of these because it’s gonna be, if there’s any justice, the election a year from now will all be about Obama.

RUSH: Look, there have been extensive surveys about presidential debates, what are there, two to three of them within two months of the election. There’s been extensive research done on how really inconsequential they are to the out — (interruption) well, yes, unless you screw up like Gerald Ford and so forth. George Bush is not the greatest debater in the world. How many of you remember 2000 and 2004 watching Bush debate first Gore and then John Kerry, cringing after every one of them? You’re sitting there saying, “Why didn’t he say this? Why does he look so scared?” It didn’t matter that Gore and Kerry came off as buffoons, too, we wanted our guy to look good. We felt he didn’t. In the end it really didn’t matter.

What can happen here, Dick, is that one of these candidates can make a big enough mistake to end his candidacy at this stage in the debates, but there’s not much that can happen here that could disqualify any Republican candidate from beating Obama a year from now. Now, I mentioned at the top of the program that I was watching this debate and I broke out in almost uncontrollable laughter at one point, and I will share with you the sound bites that caused that laughter when we come back. 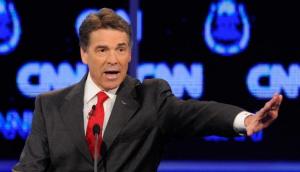 Whatever the left’s agenda is, our people are gonna respond to it. This is a story from the New York Times, October 17th: “Presidential candidate debates have a significant impact not just on voter sentiments but on media sentiments, according to a study by the Pew Research Center’s Project for Excellence in Journalism.” So the candidates probably do think that there is a lot of impact being made on the media. If there’s one thing I could do with Republicans inside the Beltway and Republican conservative media people, it would be to wave a magic wand and immediately have them not care what’s said about them in the Washington Post, the New York Times, ABC, CBS, NBC. That would be so liberating. But when they are obsessed with what’s said about them, when they are obsessed about what those kinds of news people are gonna say about their debate performance, we’re going to get debate performances like we get, good or bad.

So let’s just hit it here. This is in the middle of an exchange between Romney and Perry. I’m gonna try to set the table here. I’m sitting on the bright red, very comfortable sofa in my fashionable library; “liberry” for those of you in Rio Linda. Seated to my left is Kathryn. Between us, Abbey, sheepdog. And there have already been a couple of times in the debate where I have cracked a smile and laughed and a couple of times where I’ve been mad and hit the pause and shouted something at Kathryn and rewound it and made her look at it again to get the point I was trying to get across to her.

Then this happened and I just lost it. I started laughing. Rick Perry — and I mean this in a complimentary way. People are gonna find this not strange and not hard to believe, but you might be confused by this. Rick Perry makes me laugh. But not at him. I laugh with the guy. And when he went after Romney out of the clear blue, I mean they’re talking about something else, and then all of a sudden, with no transition, with no lead-in, just out of the clear blue, Perry says…

PERRY: You lose all of your standing from my perspective because you hired illegals in your home, and you knew about it for a year. And the idea that you stand here before us and talk about that you’re strong on immigration is on its face the height of hypocrisy.

RUSH: And Romney’s looking at him like, “What the hell is this? Where did this come from?” Romney said, my God, what’s he talking about, ’cause it just came out of nowhere. Perry is facing the camera and then as if on cue, he does a 90-degree turn to the right and looks at Romney. Romney’s staring at him, his mouth is falling open, (imitating Perry) “And you lose all your standing from my perspective ’cause you hired illegals.” So Romney responds thus.

ROMNEY: Rick, I don’t think I’ve ever hired an illegal in my life. And so I’m afra — I’m looking forward to finding your facts on that because this —

PERRY: I’ll tell you what the facts are.

PERRY: You had — (crosstalk) 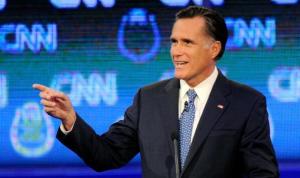 PERRY: It’s time for you to tell the truth.

ROMNEY: I’m speaking. You’ve got 30 seconds. (crosstalk) The way the rules work here is I get 60 seconds —

PERRY: Well, no, but the American people want — (crosstalk)

ROMNEY: — and then you get 30 seconds to respond, right? (crosstalk)

PERRY: — and they want to hear you say that you knew — (crosstalk)

ROMNEY: Anderson? Would you please wait?

PERRY: — illegals working at your — (crosstalk)

ROMNEY: Let me finish with my — what I have to say. Look, Rick —

ROMNEY: This has been a tough couple of debates for Rick. And I understand that, and so you’re gonna get testy.

RUSH: (laughing) Obviously what happened here is somebody told — ’cause Perry’s been jumped on for this tuition for illegals. He’s gotta fight back, so somebody told him that Romney hired illegals to cut the grass. And something triggered Perry’s memory of that, and in the middle of another thought, he stopped and he turned, “and, by the way, you have lost all my respect. You have lost all your standing with me.” And Romney cracked — not cracked, but this is the first time Romney got rattled in one of these because of this and some other people started piling on, and he eventually had to, “Yeah, yeah, okay, what it was, I hired a contractor, and the contractor hired the illegals, and when I found out about it I said, ‘Man, you can’t do this, I’m running for office,'” which was not helpful for Romney. But the way it looked, the way it all sounded, I found it funny so I started sending notes to friends, “I’m laughing my butt off here,” and they wrote back, “This is not good if you’re laughing, this is not good news.” (laughing)