RUSH: From the Washington Examiner. It’s a story here by Conn Carroll. “Last week, it was a bus tour in North Carolina and Virginia specifically pushing the aid-to-states portion of his second stimulus at the same time that Democrats were pushing for a vote in the Senate. That failed. This week, while Senate Dems push the infrastructure portion of his jobs plan, Obama will ignore Congress and launch a ‘We can’t wait’ campaign highlighting executive orders he is making to turn the economy around.” So basically Obama has abandoned his jobs push now, since the Democrats in the Senate wouldn’t vote for it. He’s abandoned that. 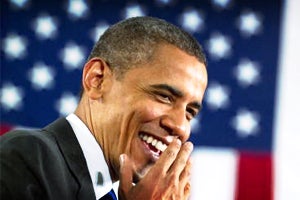 Now he’s moving on to the infrastructure portion, and he’s out there telling people on the stump, “You know what? Congress won’t do it, I’ll just do it myself, we’ll just do it with executive orders.” Examiner: “Today, in Las Vegas, Obama will focus on new rules he is initiating, that will make it easier for homeowners with little to negative equity in their homes to refinance through Fannie Mae and Freddie Mac. Then, after fundraisers in Las Vegas, Los Angeles, San Francisco, and Denver, Obama will make a second speech in Colorado announcing a program that will make it easier for borrowers to pay off their student loans. In the weeks thereafter, the White House plans to announce one new initiative a week.

“But don’t expect too much, the NYT also reports: ‘[O]fficials acknowledge that the coming policy changes, executive orders and agency actions are generally less far-reaching than the legislative proposals now before Congress.'” So… “Which makes Obama look less weak? Continually failing to get even a majority of Democrats to vote for his second stimulus, or continually announcing a series of measures that no one believes will help the economy?” Which one makes him look less weak? Now, by the way, here are the five changes in Obama’s mortgage plan. Five ways that Obama is changing federally backed mortgages, from the National Journal. Number one: “Eliminate the Ceiling: Currently, borrowers can owe no more than 125 percent of the value on their home to qualify for refinancing under HARP.

“The new requirements will eliminate that ceiling…” Well, that’s gonna really work. “No equity requirement.” There will be no equity requirement whatsoever. “No new property appraisal will be required.” They will “extend the term of the program,” and they will “invite competition.” Those are the five things. Now, to me, those five things sound like some of what got us into trouble in the first place. Making loans to people who couldn’t pay ’em back is pretty much the same thing as eliminating the ceiling on how much you can borrow. There’s no limit on what you can borrow to fix your problem, and you don’t have to have any equity in the game in order to borrow all this money. No, you don’t have any income or assets, none of that. All this is gonna be backed by Fannie Mae, Freddie Mac. This is just a repeat of what got us into this mess in the first place. It’s not a fix. It’s continued destruction of the whole problem.