RUSH: Brian in Saratoga Springs in New York, great to have you on the program, Brian, hello.

CALLER: Hi, Rush. Rush, do you think Sarah Palin will release her supporters so we could have a true conservative presidential nominee?

RUSH: Uh, by release do you mean endorse somebody and ask her supporters to vote for that person?

CALLER: Good question. I think that would be the natural occurrence. I think there’s four to choose from. I don’t know what she would do, but if she releases them initially at least they can choose from those four. What do you think?

RUSH: Well, wait a minute. Which four are you talking about?

CALLER: Well, in my humble opinion I believe it’s going to be Rick Santorum, Michele Bachmann, Herman Cain, and probably Newt. Okay? So if she releases those —

RUSH: Wait, wait, wait. Wait a second. One of those people is gonna be who Palin’s gonna endorse?

CALLER: In my humble opinion I think those are the true core conservatives, you know, Bachmann, Santorum, maybe Perry. But if she does release those supporters, Rush, that person will get the nomination in my humble opinion. 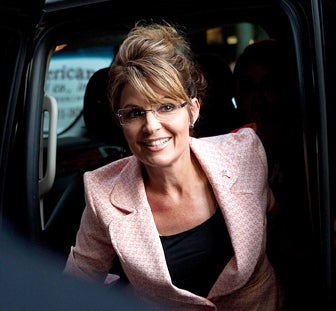 RUSH: If she asks her supporters to support a particular candidate in unison, perhaps. I don’t want to be misunderstood here. I’m not sure she’s got supporters to release.

CALLER: Oh, I have a lot of friends that follow her.

RUSH: Yeah, but you generally say that about somebody that’s in the race that has people voting for them, working for them. Then they lose and they decide to ask their supporters to support somebody else. She never got in the race, and to the extent —

RUSH: You’re right, Rush, but I’m a little confused with Sarah Palin and help me out here. Because she and Bachmann came up with the term “crony capitalism.” Actually, I think it started with Sarah and then Bachmann used it. It seems like a natural alliance for Sarah Palin and Bachmann, especially with their Tea Party record. And there’s millions of voters that would go that direction if Sarah Palin truly wants a conservative candidate. So why would she not do that?

RUSH: I haven’t the slightest idea. I don’t know that she would or wouldn’t.

CALLER: Do you think she will?

RUSH: Hmm? Do I think she will?

CALLER: Do you think she will eventually support a true conservative, Rush?

CALLER: If she doesn’t we’re finished, we’re gonna get Romney. You know that, Rush.

RUSH: I don’t know that she’ll do it before there’s a nominee.

RUSH: Well, I could be wrong. I’m not trying to depress you here. I just don’t know. I haven’t the slightest idea what she would do.

CALLER: There are so many Tea Party people out there waiting to hear what she has to say. I hope she comes forward, Rush, it would help our country.

RUSH: Do you really think there are a lot of people out there who are not making a choice until they hear from her?

RUSH: Well, that’s what people say about me, that there’s a whole lot of people out there not making a choice ’til they hear from me.

CALLER: That’s not your job, Rush. I respect that.

CALLER: Because she’s in the political world, and she’s been a Tea Party advocate, cut spending, repeal Obamacare, and that fits into Santorum and Bachmann. Romney does not fit there, neither does Perry on immigration. So I’m just curious as to why she wouldn’t support someone because if she doesn’t, she’s so powerful, Rush, and you know that, she’s so powerful, if she did support a conservative candidate, they would give Romney a run for —

RUSH: Well, she’s got a pretty good track record in endorsements when she’s out there in the primaries. She does —

CALLER: She sure does.

RUSH: She didn’t pick all winners but she’s got a pretty good track record endorsing people that do end up winning.

CALLER: So do you think it might happen just to encourage me a little today?

RUSH: Oh, it could very well happen. It’s at least 50-50 that it’ll happen, but you gotta realize, now, there’s a lot involved in that. If she wants to run down the road, it’s gonna be very difficult. I’m not sure that she would do it if she has political aspirations down the road, because even though she’s not in, if she chooses somebody else, she’s by definition, elevating somebody above herself, and in this business I don’t know that you do that. Wait ’til after the nominee is chosen, then get involved, that’s the safe play, that’s the thing to do for the sake of the party, and there’s the party to be considered here. A lot of these people will do what they do to remain in good favor with the party ’cause the party’s the vehicle.

You gotta build your machine within the party. So it’s six of one half dozen the other on that as to what she’ll do. But you’ll have fun waiting. You’ll be filled with all kinds of anticipation waiting. And when you do something like that you burn a bridge. I mean when you pick somebody, you’re not picking four or five others, and she may not want to burn a bridge that she’s gonna eventually have to cross herself. So off the top of my fertile mind those are my initial reactions. I must confess I haven’t even thought about that, so you hit me with a question I have not applied my vast intellect to. So I’m sort of doing that here on the fly, thinking out loud, you know, giving pros and cons verbally here.