RUSH: Let’s do the opposite of walking on eggshells. Let’s go to last Friday night, Fox Business Network, the Neil Cavuto show, and he’s talking to casino mogul Steve Wynn, and Cavuto said, “The president will be having a campaign rally at the Bellagio. Safe to say that one casino executive who will not be there is the guy that used to own the Bellagio, Steve Wynn.”

WYNN: The policies of this administration have destroyed the working — the living standard of the working — class in America. What is ostensibly the base of the Democratic Party is taking the worst hit in history because of the unbelievably uninformed policies of this president and his colleagues who have fostered this ridiculous class warfare, these nonsensical policies that have been proven to be ineffective and unsuccessful everywhere they’ve ever been tried in the world. 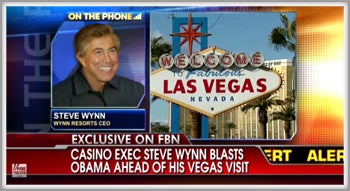 RUSH: That is Steve Wynn who owns numerous casinos in Las Vegas, also in Macao. Then Cavuto said, “So is Obamacare the biggest factor to you, Steve, as far as making decisions down the road and helping out these two Israeli gentlemen, I guess to expand there, you just wouldn’t do it, you couldn’t do it because you don’t see the light here?”

WYNN: I can’t see the light. I’m frightened to death about the future of business. My friend Harry Reid hung up on me the other day for the first time in 40 years. That’s what it’s come to. I supported a Democrat congresswoman named Shelley Berkley. I called her during Obamacare. I said, “Shelley, what are you doing? How do you do this? This is killing the unions and all of us who are supplying health care to our employees,” and she said to me quote — quote; now, this is not hearsay. Shelley said to me — and she’s running for the Senate, “Steve, I know it’s terrible. My husband’s a doctor. He hates it, too. But if I don’t vote for it, she will punish me.” “She” being Nancy Pelosi. If any businessman or any working person doesn’t understand that this is a turning point in American history, then I’m afraid we’re gonna get what we deserve.

RUSH: Steve Wynn in Las Vegas. So Harry Reid hung up on him. Look, the obvious question is, “Why is he still voting Democrat after all this?” That would be my obvious question. “Why are you still voting for these people?” And you know what I bet the answer would be, “They’re going to win, and I need to be in good with the winners.” But here it hasn’t helped, with Obama it didn’t help. This is amazing, talking about Democrat congresswoman Shelley Berkley. “I called her during Obamacare. I said, ‘Shelley, what are you doing?’ She said, ‘I know, I know, it’s horrible. My husband, he’s a doctor, he hates it, too, it’s terrible, but if I don’t vote for it she will punish me,” meaning Pelosi. “If I don’t vote for it, she will punish me.” Nancy Pelosi. Steve Wynn, by the way, is somebody who actually cares deeply about his employees.

One of the raps that big CEOs and large business operators get is that they don’t care about their employees, that they exploit them just like they exploit the customers and everything. Steve Wynn cares deeply about his employees. I’ve met a bunch of people who work for the guy, and they all love him. They all love the heck out of him. Now, you’ve got malcontents here and there in every business. It’s not universal. But he’s pretty much universally liked and adored and respected by people that work for him, and he has a deep concern for them, and he tries to pay them as much as he can and keep his business profitable and operating. But I only have one quibble with him. The working class hasn’t been the base of the Democrat Party since FDR. The base of the Democrat Party doesn’t work. The base doesn’t work. That’s exactly how they want it, too, by the way.