Ballot Initiatives: Ohio MUST Opt Out of Obamacare

RUSH: Ohio and its election on November 8. And there are two really important issues on that ballot. One is Issue 2; the other is Issue 3. Issue 2 would replicate what happened in Wisconsin vis-a-vis state employees, unionized state employees: Take away some collective bargaining rights. It would require them to make modest contributions to their own pension plans, like you and I do. We have to contribute to our own 401(k)s. 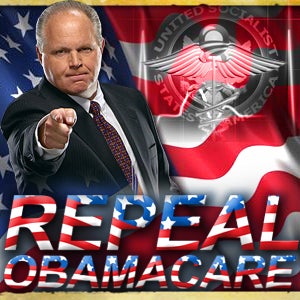 Now, the news out of Ohio is that the unions are gonna win this one slam dunk, big time. But apparently that is not true. “An internal memo from a key labor-backed group in the state is flatly warning that the polls are ‘flawed’ and that a big win for labor is not even ‘remotely possible.’ It adds that the [conservative] messaging has ‘worked,’ and that there’s good reason to suspect that a ‘massive amount of voter confusion remains,’ suggesting the fight could still go either way.” Now, they’re trying to say that the union is gonna win this thing in a slam dunk and it’s not. “[A] big win for labor is not even ‘remotely possible.'” It’s close. It’s crucial. Issue 3 on the Ohio ballot on November 8th is also crucial. Very important.

That ballot basically states that Ohioans will opt out of any federal mandate to buy health insurance. And that is key. That has to pass. That will send a message to the United States Supreme Court, it’ll send a message to a lot of people. If that goes down… Let’s put it this way: If the state of Ohio does not opt out of the federal mandate, I can guarantee you what the news is gonna be. The news is gonna be, “Here’s a swing state, very important to the presidential race, could go either way, and those people want Obamacare.” That’s what’s at stake with Issue 3. If the people of Ohio do not pass Issue 3 and reject and exempt themselves from the Obamacare mandate, then, “Katie, bar the door.”

It isn’t gonna be pretty, and it could very well have influence on the Supreme Court ruling. The regime is asking for a very fast ruling on Obamacare, and ? They pay attention to election results, and if there’s a swing vote in the Supreme Court, and that justice happens to see that people in Ohio had a chance to reject the mandate, had a chance to exempt themselves from Obamacare, and they didn’t? It could be the end of the line. It’s something to keep in mind. We’ll keep you posted. This is still a couple of weeks away. Well, less than two weeks away. It’s a week from Tuesday. But Issue 2, Issue 3 in Ohio are very important.