Cain and Perry Break the Mold

RUSH: Herman Cain, by the way, continues to do well in the polls. Several hit pieces on him and his staff are out this morning. From the New York Times: “As Cain Promotes Management Skills, Ex-Aides Tell of Chaos.” The article goes on to say Herman “Cain’s presidential campaign has generated much promise … But Mr. CainÂ’s campaign may have undermined itself with questionable decisions and a series of missteps,” and there’s also this love note from the AP: “Top Cain Aide Has Checkered Past.” The AP goes on to say, “Meet Mark Block, Cain’s unorthodox campaign manager. Perhaps no one is more responsible for the Georgia businessman’s meteoric rise in the presidential polls than Block, a Republican strategist and tea party leader who’s left a trail of questionable campaign work behind him.”

Now, you would think, folks, that the free press — a free press — would be embarrassed doing the regime’s work for them like this day in and day out, but we don’t have a free press. Where has there been any reporting of anything like this ever about Obama or his campaign or people involved? So they’re trying to take Herman Cain out now. The Washington Post is still assaulting Marco Rubio, and I’ll tell you why. I’ll tell you why. They are deathly afraid.

RUSH: Just this afternoon on the Fox business channel, Fox Business Network, they talked to Herman Cain. They were on Cain’s bus down in Talladega, Alabama; and one of the Fox correspondents, a guy named “Barnes,” said, “The last presidential candidate to come to Talladega was former Alabama Governor George Wallace, a segregationist.”

CAIN: I remember being on the bus in Atlanta riding as a young teenager where I would see the sign at the front of the bus that said, “Whites seat from front. Colored seat from rear,” and I had to sit in the back of the bus because of the greatness of America and the fact that we have this ability to change, that’s one of the things that has made us great. And today I don’t have to sit in the back of the bus. I own the bus, and my picture is on the outside! That’s the greatness of America — and, I’m running for president of the United States of America! It doesn’t get any better than that.

RUSH: Herman Cain, who admits that he was around when everybody was down for the struggle. He remembers having to go to the back of the bus. Now he owns the bus. This kind of optimism is why Herman Cain’s not fading away. You know, he’s the latest non-Romney. There have been many non-Romneys, and they have popped up — they have shot up in the polls — and then they’ve lost ground. Herman Cain hasn’t yet. He’s still up there, and a lot of people… I’ve got some friends who want to do fundraisers for the guy. This support for Herman Cain is real, and a lot of these people that I know who want to do fundraisers for Herman Cain are businesspeople as well as being oriented toward politics. So there’s something happening here.

There are many facets to this campaign. You’ve got Rick Perry now saying that, “Ah, I’m not sure that I’m gonna be in these debates anymore. This next debate may be my last one,” and who can blame him? He doesn’t do well in these debates, and these debates really aren’t debates. Who is it, Newt and Cain are gonna do a private Lincoln-Douglas kind of debate. You know what ticket prices for that thing have reached up? Thousand dollars! A thousand dollars to be in the hall, 200 bucks pay-per-view for a Lincoln-Douglas style debate between Newt and Herman Cain. So the dynamic is changing, and nine candidates on the stage with 30 seconds here or a minute there. You really don’t have debates. You have glorified press conferences with the moderators choosing who gets what questions and how much time to respond and all of that.

Some people do well in formats like that, and others don’t. Some people might say, “But, Rush, it’s a mistake for Perry to drop out.” Folks, it really isn’t. I remember when I was a deejay — struggling young deejay long ago in my career — one of the radio stations I worked at was in Pittsburgh, and the program director decided that the number one song in the market we weren’t gonna play it. He didn’t like it. He thought it was culturally degenerative. (This is in the seventies.) So he says, “We’re not gonna play it,” and all of us jocks said, “What do you mean, you’re not gonna play it? The competition’s playing it; they’re gonna kill us.” He said, “Nobody will know. You can’t be hurt by a song you don’t play,” meaning: People won’t tune out of a song they don’t play. 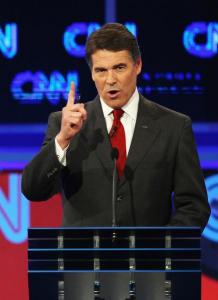 There’s a show business adage that if you don’t do it, it can’t flop. So if Perry doesn’t do a debate, he can’t flop in one. That’s the theory. You take a measure: “Okay, what’s the upside; what’s the downside?” If a particular format’s not good for somebody by not doing it, you can’t flop. You do run the risk of the news being, “He doesn’t have the guts to do it,” or whatever the criticism might be, but you are limiting the damage. You don’t flop at something you don’t do. (interruption) Well, yeah, but this is all oriented toward getting the nomination. (interruption) Well, I think what Perry’s talking about is particular debates like this, you got nine people up there.

One on one debates that go for an hour and a half, even if they are the staged TV kind with the League of Women Voters format, that is a different ball of wax. It is a different animal. So that’s Perry’s decision. Cain and Newt have said to hell with it in their own way. They’re gonna have their own private, two-man debate and charging big bucks for it — and I like this because in both cases it is a rejection of the conventional wisdom. It’s a rejection of the conventional system saying, “This is how we do things. This is how we elect a president: We have nine candidates on a stage, and we call it a debate.”

It’s really just an elongated press conference with the moderators playing gotcha,” which is fine. I’m not being critical of that. That’s what it is. These guys have decided in their own way they don’t want to be part of it. They don’t play that way. If these formats don’t play to their strengths, don’t do it — and Perry’s obvious operating philosophy is: If he doesn’t do it, he can’t flop. If you stop and think about it, it makes perfect sense. I mean, everybody’s talking about after each debate how, “Ehhhh, he just didn’t quite get there. He looks like he’s struggling for words,” or whatever the criticism is — and also part and parcel of the theory is that debates are by no means the only thing that contribute to somebody’s winning an election or a primary — and they aren’t.

In fact, they may rank pretty low. They can do more damage than they can do good, is the bottom line. You can ace debate after debate after debate. It is said that Romney does. But, look: 70% of Republicans still say after Romney’s acing of all of these debates that they prefer somebody else. The non-Romney flavor of the moment happens to be Herman Cain — who, by the way, interestingly, Obama wants to move back to the back of the bus. I mean, that’s an obvious conclusion one could draw. Yeah, the phrase is “What’s cut won’t flop,” and it’s true. You’re editing a television show or a movie and you’re putting the final product together and you cut something out.

“Well, we’re gonna cut that because they can’t flop.” Actually, what this stems from, if you read any of the philosophy of the great artists, almost all of them will tell you that what makes great art is what they take out of it, not what is added to it. Whether they’re trying to be complex or simplistic, it’s still what they take out — and it has also the root: “Brevity is the soul of wit.” All of this stuff, all of these different philosophies are tied together, and they basically say, “Play to your strengths and avoid as best you can your weaknesses,” and that’s what people here are deciding to do rather than continue to butt their heads against a wall that is immovable. (interruption)

Mmm-hmm? (interruption) Is…? (interruption) Okay, the question being asked by the official program observer is, “Isn’t being articulate a primary qualification for the job?” Yeah, undeniable. So if you’re not articulate in a particular format, get out of it. How can you be hurt if you’re not articulate, if you don’t go anywhere where you are un-articulate or inarticulate? That’s the theory. Now, the other side of it is the news is out that Perry is leaving the debates, and of course what will be the public relations aspect of that and what will his opponents say? “Oh, Rick Perry can’t handle it! He’s quitting! He can’t handle the pressure, admitting he doesn’t have the ability,” whatever they say about it. Hey, it’s the big leagues. (interruption)

I don’t know how articulate Eisenhower was. You know, Eisenhower is thought of as a great president, he really is. But Eisenhower fits the mold of what I’m talking about. Eisenhower didn’t do anything. Eisenhower comes out of World War II. What did he learn in World War II? “Your enemies, you shoot ’em.” Okay, so he’s elected president. He figures out or somebody tells him, “You can’t shoot Congress.” He says, “Okay, fine,” and goes and plays golf and he becomes a member of the Augusta National and he joins a couple clubs out in Palm Springs and he’s on the golf course all the time — and a few other places, but he didn’t do all that much. He was considered a great president. Yeah, it was a somewhat pre-TV, yeah, but at the same time we were also in a postwar boom. He didn’t do anything. He didn’t mess it up. Just let things go, let things happen, unlike the meddling that we’ve got every day from this bunch, who can’t leave well enough alone.