RUSH: Coca-Cola, by the way, it’s so sad, but it’s great for my tea company. Well, they’re changing their packaging. They’re going to white cans. They’ve aligned with the World Wildlife Fund. They’re gonna repackage Coke over the holiday season to go to white cans featuring an image of a mother polar bear and her cubs on the side. They’re gonna try to sell Coke and Diet Coke on the basis that we’re killing polar bears. Kid you not. Kid you not. Each 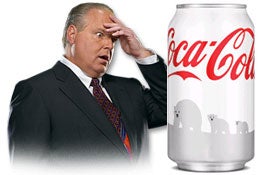 purchase of a white Coca-Cola can supports false testimony on global warming perpetration of the myth about endangered polar bears. It’s a hoax and they are raising money for a hoax through the holidays by way of the sale of Coke products in white polar bear cans. (interruption) Who got to ’em? I’m thinking nobody woulda had to get to ’em.

There are plenty of stupid people in this country running corporations and working, and they look out there and they say, “Okay, the rest of the stupid people think that the polar bears are dying. I want to sell Coke, so I’ll market to the stupid people. I’ll market to people who believe Algore. I’ll change the marketing of my company and my product and I’ll just aim for the lowest stupid common denominator I can find. I’ll do it with the polar bear hoax.”

RUSH: Who was it that had the car commercial? Was it Nissan? This polar bear goes traveling from the North Pole down to Chicago or somewhere and keeps encountering people destroying his habitat. He finally runs across some guy with an electric car in the driveway and waits for him and hugs him. Now Coke is in on it.

“For years Coca-Cola has given millions of dollars to eco-extreme group World Wildlife Fund, whose alarmism and perpetration of falsehoods are unmatched among its cohorts in climate activism. Now Coke has initiated a new campaign with WWF that features its iconic advertising species in an effort to drive more funding to the international nonprofit group to ‘protect the polar bears’ Arctic home.’ The promotion will include new packaging for Coke over the holiday season, changing its familiar red cans to white, and featuring an image of a mother polar bear and her cubs on the side.

“Coke says it will donate $2 million over five years to WWF for ‘polar bear conservation efforts,’ and will also match donations made at iCoke.ca. Last year Coke gave WWF $1.64 million for its various activities globally. ‘The planet is changing very quickly, and nowhere more quickly than in the Arctic,’ says Gerald Butts, president of WWF-Canada. ‘ItÂ’s really important that we all understand that they need our help,’ he added. ‘Climate change is changing livelihoods, itÂ’s changing migration patterns for species, and we want to plan ahead. We want a future for the Arctic where the communities of people who live there are vibrant and sustainable, and the iconic species — in particular the polar bear — has a long-term future on the planet.'”

Now, there’s nothing about this that’s true, even according to the US Fish and Wildlife Service. The estimated numbers of polar bears have increased by somewhere between double and quintuple, that is growing from between 5,000 and 10,000 to 25 to 25,000 from the 1950s until now. They’re also known to be tremendously resilient and in some areas where they have declined the reason has been attributed to too much ice, not too little. Anyway, it’s all a hoax, but Coca-Cola is figuring that there’s enough idiots in our society that buy products — that’s GE, too. You know, all these companies that go green, have these sales promotions that go green, they figure there’s enough idiots out there that think that buying the product will help save a polar or the planet that they’ll do it. Even if they don’t happen to personally believe in the politics of it, they’ll still do it. So I have to continually laugh at this notion that big businesspeople are Republicans.
BREAK TRANSCRIPT
RUSH: Here’s George in Myrtle Beach, South Carolina, welcome to the EIB Network. Hello.

CALLER: Hi, Rush. Thanks for having me on.

CALLER: I just had a suggestion. I was thinking, you could market your tea to the enviro-foods head-to-head against Coke because you don’t have those nasty carbon dioxide bubbles in your —

CALLER: And, you know, you won’t kill polar bears or anything drinking your beverage.

RUSH: Well, that’s true. I have to hand it to you, that’s another positive thing about Two If By Tea. There is not one aspect of it that is environmentally destructive. Quite the opposite. Our tea does not emit carbon, pure and simple. We can’t be destroying ozone or anything else. All we do with our tea is bring smiles of pleasure and enjoyment.