RUSH: You know, a lot of people are talking today about Mona Simpson (sister of Steve Jobs) and her eulogy at his memorial service, which was published over the weekend in the New York Times. This is what they’re talking about. On his deathbed Jobs had his entire family assembled, and just to cut to the chase he looked past them all after he had said his good-byes. He looked past them all, and his last words were, “Oh, wow! Oh, wow! Oh, wow!” and then died some hours later. Those are the last words that he uttered. Not to anybody. Not looking at anybody. Looking “past” everybody. So now there is a fascination with what he saw. What was he talking about? What was he referencing? Everybody is dying to know. It’s a giant fill-in-the-blank. 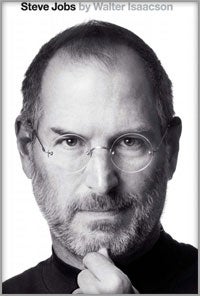 It is fascinating. As I told you, I read Isaacson’s biography. I sent Walter Isaacson two e-mails in the middle of reading the biography, just sharing with him my reaction to it, the impact that it had on me — which was profound. And like everybody else I’m intrigued by this, too, “Oh, wow! Oh, wow! Oh, wow!” What did he see? I did say I felt shortchanged I never had a chance to meet him. I felt shortchanged I never had a chance to talk to him. Oh, yeah. I went through all emotions. I got choked up, I got angry — at him, the way he was treating people. I got angry at myself for not trying harder to get through to the guy (and not for business reasons, not for advertising reasons or anything like that). It was just, ah, a combination. Regret.

Then it was exultant at times, euphoric. It’s an incredible book, the way it’s the story itself is incredible and the way that Isaacson has written this, it’s not your standard biography. I bought ten physical ones, but I read it on the iPad. I got ten copies of the hardcover. I don’t know where they all are now but I did get ten of them. It had a profound emotional impact on me. There were times I had to stop reading it. It was not so much a page-turner. Other parts of it were. But it was… It was… I don’t know. Suffice to say, it was a powerful message, impact, all of that. (interruption) No, I didn’t see the New Yorker cover. The New Yorker cover, St. Peter checking Jobs in with an iPad? I haven’t seen that. I am told that the New Yorker has a cover.