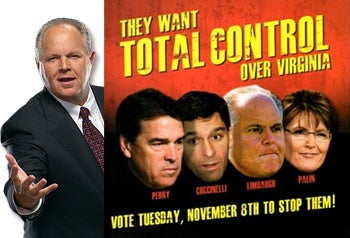 RUSH: The Democrats are running an ad, folks, in Virginia. The Democrat Party in Virginia, Jim Geraghty sent me the ad. I wouldn’t-a known it be with Jim Geraghty at National Review Online. They’ve got a Web ad that says they want total control over Virginia. It’s a picture of four people: Rick Perry, Ken Cuccinelli, me, and Sarah Palin. That’s right. The latest mailer from the Democrat Party in Virginia says that if you don’t vote — if you’re a Democrat, if you don’t vote — Virginia may suddenly be under total control of Rick Perry, Ken Cuccinelli, Rush Limbaugh, Sarah Palin.

To which we say, “If only!” Ha-ha-ha. So here’s the combination, as Geraghty points out: You have a governor of another state running for president, that would be Perry; the current state attorney general, Cuccinelli; the world’s premiere radio talk show host, Rush Limbaugh; and a former governor of another state who announced that she’s not running for president, only one of those people even lives in Virginia, and he’s already in a powerful state office. So it’s not quite clear why he would be joining the Perry, Limbaugh, Palin insurrection against Bob McDonnell, a governor that we agree with much of the time. So, “They want total control of Virginia,” and I’m in the group of four that wants total control of Virginia