RUSH: Folks, it’s an amazing day out there. There’s so much going on. We have the Colorado vote. We have Democrat operatives admitting that I have been right all along, that Obama’s jobs bill was never intended to pass. We’ve got a Rasmussen Reports poll that shows support for Obama’s $35 billion state and local government bill to go out and hire teachers and so forth is only supported by 22% of American voters — and then there’s this. The Mayor New York City, “Michael Bloomberg said this morning that if there is anyone to blame for the mortgage crisis that led the collapse of the financial industry, it’s not the ‘big banks,’ but Congress.” Bloomberg actually has said something now that makes sense. This is the first time I can recall in I don’t know how long that Bloomberg has said something that makes sense.

“Speaking at a business breakfast in midtown featuring Bloomberg and two former New York City mayors, Bloomberg was asked what he thought of the Occupy Wall Street protesters. ‘I hear your complaints,’ Bloomberg said. ‘Some of them are totally unfounded. It was not the banks that created the mortgage crisis. It was, plain and simple, Congress who forced everybody to go and give mortgages to people who were on the cusp. Now, I’m not saying I’m sure that was terrible policy, because a lot of those people who got homes still have them and they wouldn’t have gotten them without that. ‘But they were the ones who pushed Fannie and Freddie to make a bunch of loans that were imprudent, if you will.

“‘They were the ones that pushed the banks to loan to everybody. And now we want to go vilify the banks because it’s one target, it’s easy to blame them and Congress certainly isn’t going to blame themselves. At the same time, Congress is trying to pressure banks to loosen their lending standards to make more loans.'” He’s right about that. The subprime thing is in the process of being repeated. So Bloomberg gets it right. So now, more and more people see it. See, everybody knows this. Everybody knows the banks didn’t do it. Everybody knows it was Congress — and Democrat presidents, by the way — responsible for the collapse of the home industry. It’s very simple. It’s just now that more and more people are starting to acknowledge it.

RUSH: To the phones we go to Atlanta. Jim, thank you for calling. You’re up first today. Great to have you with us, sir.

CALLER: I was just calling to make a comment on Bloomberg’s statement, that he was definitely correct in saying that Congress was the cause for the housing failure that we’ve had.

CALLER: I’ve been a mortgage banker for 28 years, and because of the decisions, my income has dropped 90% and I had to get out of the mortgage industry and find something else at an age in the mid-fifties.

RUSH: Wow. Okay, so you can confirm people like you were ordered by federal officials to make loans to people couldn’t pay ’em back?

CALLER: We had to come up with “loan programs,” and there’s an admirable idea. We were told to devise loan products that put people into homes that really, you know, couldn’t afford the house.

RUSH: Wait a second. I know you’re trying to be a nice guy, but what’s admirable about that? See, this is where we get caught up in somebody’s good intentions. Yeah, we would love for everybody to have a house. Why not on the beach in the Hamptons?

CALLER: Well, basically everybody should have a piece of American Pie, own a home. But, you know, quite honestly, we saw people were, you know, no credit, no down payments, no nothing; and, you know, we had to put them into homes in order to buy a house.

RUSH: Wait. You just said that you thought they should have a home; it was admirable. So what difference does it make if they can’t afford it?

CALLER: Good question. That’s what we thought, the banks. But, you know, when they revised the Community Investment (sic) Act, they told the banks: “If you want federal funds you have to get people into houses.” We felt basically they were buying votes, putting people into homes to buy votes.

RUSH: That’s exactly what they were doing. Very admirable, too. But, anyway, you’ve seen 90% of your income vanish?

RUSH: What Bloomberg was saying is what we all know: They’re trying to blame people like you is the thing. They’re blaming you for hooking people into these loans. That’s what’s going on: People like you are trying to be blamed for this when you were forced to do it, and everybody knows it. It’s just Bloomberg finally said it ’cause he’s probably ticked off by now. 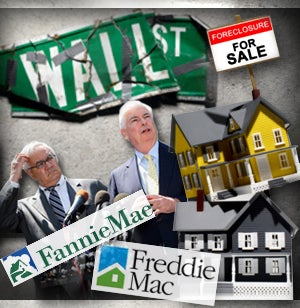 RUSH: Okay, the mortgage broker from Atlanta said that it was an “admirable objective” to get everybody in a house. Why stop there? Why not get everybody in a house in the Hamptons? But that’s not the point of this. The point of this is: Bill Clinton, the federal government, Janet Reno, various Democrats members in Congress, created a program that led to the collapse of the housing industry and a huge problem in our financial system : The subprime mortgage. They then tried to blame it on guys like the caller from Atlanta, tried to blame it on the big Wall Street bankers! Yep, even Obama is out there saying (paraphrased), “These poor people got hoodwinked. These evil bankers.” The “predator lenders,” I think they were called. Yeah, these predator lenders, you know what they did?

They left their cushy offices on Wall Street and they went down to homeless areas in Manhattan and all over the country and they found these schlubs and they say, “Come here! I’m gonna lend you some money, and I’m gonna force you into a house, and you’ll never be able to pay me back!” That’s what they want us to believe? That’s what happened? These poor saps were sucked in by a bunch of evil idiots who lent money to people who were never going to pay it back? That’s not what happened at all. The mortgage bankers were forced to lend the money because it was such an “admirable” idea: Home ownership for every American, yes.

So what happens then is that these mortgage bankers, under the threat of investigation from Janet Reno and Barney Frank, had to concoct ways to make that worthless mortgage worth something to them. So they found ways to sell what was worthless to a bunch of dupes who they lied to about what they were selling; and then those dupes figured out that they were dupes, and they repackaged the whole thing to another set of dupes. And that kept happening, until finally they run out of dupes — just like the end of a Ponzi scheme. At the end of the day, there weren’t any dupes left to buy these worthless mortgages. That’s the simplified version of what happened here; and if they hadn’t done this — if they hadn’t come up with these derivatives and credit default swaps and all these other phony baloney ways to assign value to worthless loan paper — they mighta gone out of business!

You can’t stay in business giving money away. And that’s what they were being forced to do, for the express purpose of Democrats being elected to office by these people — and now look what’s happened. The value of everybody’s home has plummeted. Folks, this is an outrage! It’s near criminal what has happened, and it was all perpetrated by Democrats in the federal government. I’m sure there were some Republicans along the way who thought it was of a good idea, too, because they didn’t have the guts to oppose it since it involved “the poor;” and there were Republicans out there talking about the wonderful aspect of home ownership for all and what it meant for America and what it meant for their administration to be able to put so many people in homes. Why, look at what we did! Look at what it says about America!

Blah, blah! It was all phony and trumped up. So while a bunch of phony politicians engage in something near criminal to get themselves votes and make themselves look good the value of everybody else’s house plummets to, in many cases, underwater — and that is the primary reason this economy is in the sorrowful shape that it’s in now. That subprime mortgage is the primary reason for unemployment today; it’s the primary reason for economic collapse throughout other areas of the economy — and it was brought to you by Bill Clinton and Barney Frank and Janet Reno and Chris Dodd and any other Democrat you might want to name. You know it and I know it, and now Bloomberg (probably ticked off at these Occupy Wall Street people for polluting his city and whatever else), finally has had enough and looked at it and said, “You know, let me tell you something: It’s not the bankers that are your problem. Congress did this.” Yeah, Congress did it along with a couple of presidents.

CALLER: I would like to give you a different way to look at the real estate loan problem and that is to follow the money trail. Real estate loans generate loan fees. I recently reviewed a local bank, and 80% of their revenue came from generating real estate loans and then selling them on the third market. Banks have about 6,000 pages of bank regulations, and they have federal examiners coming in annually. One of the things that they look for is loan concentrations based on industry. So the bank examiners knew about the banks’ real estate concentration. When I worked for a major bank, we had real estate loans that have put on the market value that exceeded our net worth, so what we did is we securitized the loans and then told them to a third party.

CALLER: So take a look at whether the banks currently secured ties to the loans and then sold them to a third party and they did that to get the loan fees.

RUSH: Yeah, that’s exactly what happened. Down the line many times.

RUSH: Uh, okay. It’s the third party — and we don’t want to go “third party.” That’s how we lose. (interruption) Standard & Poor’s fault? All right. No matter what we’re gonna have people who want to deflect the blame from Congress. We’re always gonna have people saying, “Congress didn’t do it, politicians do it, Democrats didn’t do it.” There’s enough blame on this mortgage business to go around a number of times. I start with whoever it was that had the idea, and that’s the Democrats and their motivation. Quick votes, pure and simple, spending other people’s money into oblivion.