RUSH: Now, somebody correct my memory if I’m wrong on this. Didn’t Gloria Allred, a few months ago in an interview with Hannity, say she liked it when she was groped by TSA guys, that it was the closest thing to physical intimacy she had had in a while? Didn’t she say that? Naw… (interruption) Hey, wait a minute! No, no, no, no. Even if it was a joke, that’s a serious thing to joke about. We’re not allowed to joke about that. No, no, no! That’s like being “brought up in a hotel room” and being made to feel very uncomfortable. As a viewer that made me very uncomfortable. I said, “Oh, my gosh. What’s going on at Penn State? 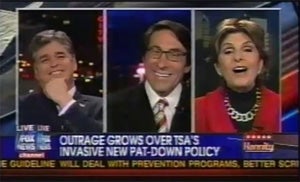 RUSH: You could say — you could say — that Gloria Allred even though she was joking about — and, by the way, folks, how do we know she was joking? It could very well be true that being groped by a TSA person is the most recent physical intimacy she’s had. I mean, there is a (whew) grain of believability about that. But even if she’s joking about it, wasn’t she encouraging groping? Isn’t that how the left treats this kind of comment? “She’s encouraging groping! She was out there and she said it was physical intimacy and she didn’t mind it! She’s really asking for it, too. What about the next time she went through the TSA checkpoint? Did they really grope her because she said she liked it?”

I wonder if Politico would be really offended by this. A lot of people are being made to feel very uncomfortable about what Gloria Allred said. So we gotta stop the presses and find somebody that we can proclaim guilty of making somebody feel uncomfortable.

RUSH: Here’s Gloria Allred with Hannity. This is from November of 2010.

ALLRED: Yeah, they did. It was the first time anybody touched ’em in a long time and, frankly, I liked it.

RUSH: Question was, did the TSA people touch your body parts? Yeah, first time anybody touched me in a long time, and, frankly, I liked it. Gloria Allred, 2010, representing a sexual harassment accuser today.

RUSH: Somebody sent me a note. “You know, you better be very careful talking about yourself as a crusty old conservative talking about a semen-stained blue dress in the same sentence.”

ALLRED: Yeah, they did. It was the first time anybody touched ’em in a long time, and, frankly, I liked it.

RUSH: You know, you let Herman Cain make a joke like that, Joe Paterno, and you see what happens. Gloria Allred can go out there and do it. The reason, nobody believes it happened and that’s why she can get away with it. In your dreams. Ha. But what evidence is she making a joke? What if it makes people feel uncomfortable? Can’t we sue? Anyway, she’s bringing forth the next Cain babe.