RUSH: Gloria Allred has shown up for her press conference. I just saw a little video take of it standing next to the blonde bombshell that is the fourth woman there. I did read where the thing was interrupted, but I can’t find out who, what, or how. So I think the thing has been interrupted somehow, maybe on purpose, because — have they reached a verdict in the Conrad Murray? Well, okay, Allred knows she can’t compete with that. So maybe she’s waiting for that, but before the whole thing was interrupted, here is what Gloria Allred said with the blonde bombshell, fourth accuser standing to her left. 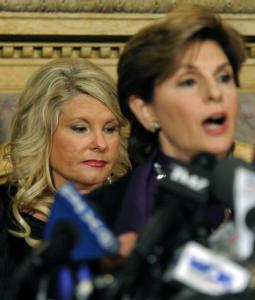 ALLRED: About a month before she was terminated, at the suggestion of her boyfriend, a pediatrician, whom she had dated for four years, she reached out to Mr. Cain for help in finding another job. Instead of receiving the help that she had hoped for, Mr. Cain instead decided to provide her with his idea of a “stimulus package.” (laughing)

Imagine you’re Politico for just a second here. In seven days you had 138 stories; not once could you tell anybody what Herman Cain allegedly did. Now, stick with me on this. You are The Politico. You break the story. You have 138 Herman Cain stories. In none of them can you tell anybody who the women are or what Cain did. Here comes Gloria Allred in one press conference with graphic details. Gloria Allred has scooped The Politico and their 138 stories. And now NBC, which, you know, has Politico people on their network all the time, NBC cannot confirm this story. And now it’s a possible verdict in the Conrad Murray trial of Michael Jackson doctor, possible verdict. The accuser’s name is Sharon Bialek.

So for Allred to come out and say that Cain offered her his version of a “stimulus package” — isn’t that joking about something that’s very serious? I mean sexual harassment is very serious, and here comes the groped one, Gloria Allred, the happily groped one by TSA agents, making a joke about it. What a circus this is.

RUSH: Get this now. I have been wrong in pronouncing the fourth Cain accuser’s name as “Be-allek.” Gloria Allred says that her name is pronounced “Bye-a-lick,” as in “Buy a Lick.” Bialek. It’s B-i-a-l-e-k. I assumed it was “Be-allek,” but Gloria Allred says her name is “Bye-a-lick,” as in (slurping) “Buy a Lick.” (interruption) No, no. No, no, no. “Bye-a-lick.” Well, there’s no R in the name, so you can’t say it’s “Rent a Lick.” It’s “Bye-a-lick,” and that’s according to Gloria Allred. (interruption) I don’t know if Ms. Bialek likes scented candles or not. I don’t know. That hasn’t come up. How is that relevant? That hasn’t been mentioned. We don’t know she’s been to Happy Valley, Pennsylvania. That’s where Penn State is. We’re still waiting for all of these details to be forthcoming and we’ll be the first to have them when they are forthcoming.

RUSH: We have sound bites from this babe, Bialek. You want to hear ’em? She says this happened 14 years ago. She doesn’t want to sue. It happened 14 years ago, she has no plans of filing a lawsuit, so Allred is just doing this for the team, team DNC. Well, here’s Bialek in New York City, Gloria Allred, the happily groped. Sharon Bialek, who claims that Herman Cain sexually harassed her.

BIALEK: Instead of going into the offices, he suddenly reached over and he put his hand on my leg under my skirt and reached for my genitals. He also grabbed my head and brought it towards his crotch. I was very, very surprised and very shocked. I said, “What are you doing? You know I have a boyfriend. This isn’t what I came here for.” Mr. Cain said, “You want a job, right?” I asked him to stop, and he did. I asked him to take me back to my hotel, which he did, right away.

RUSH: Yeah, they don’t know the details. She’s gonna tell us but she didn’t tell her boyfriend, she didn’t tell her mentor, she didn’t tell anybody else, but she’s telling us the details. Politico, can you imagine poor Politico? Hundred and thirty-eight stories last week, zilch. Gloria Allred brings this babe, this Bialek babe forward, and — (interruption) how do these women gravitate to Allred? Well, now, that’s an interesting question. How do these women always end up with Gloria Allred? I think probably they figure they’re gonna get television time. And here’s a final sound bite from Sharon Bialek.

BIALEK: I’m coming forward to give a face and a voice to those women who cannot or for whatever reason do not wish to come forward and on behalf of all women who are sexually harassed in the workplace but do not come out out of fear of retaliation or public humiliation. I really didn’t want to be here today and wouldn’t have been here had it not been for the three other women who have alleged sexual harassment against Mr. Cain. I want you, Mr. Cain, to come clean, just admit what you did, admit you were inappropriate to people. America’s in a horrible turmoil as we all know. We need a leader who can set an example which exemplifies the standards of a good person and moral character.

RUSH: And that’s you, Mr. Cain, if you’ll just come clean. Is that what she’s saying? So, anyway, there you have it. Gloria Allred’s client. Why go to a lawyer if you’re not gonna sue? Gloria Allred is not cheap as a lawyer. Why do that?

RUSH: This is Frank. Frank, welcome to EIB Network. Great to have you here.

CALLER: Welcome, Rush. I think Gloria shoulda looked at case law before she took this case on. Because Flowers vs. Clinton was won on summary judgment where Clinton’s attorneys said, take all the facts as being true, that, yes, he did ask her up to his room; yes, he did pull down his pants and ask for oral sex; she said no; he pulled up his pants; and he allowed her to leave. And it sounds like in the Cain case that this is all true, and that was ruled not sexual harassment by a judge. And, as you remember, Dershowitz and everyone else hailed that as a victory.

RUSH: Because when the woman said stop, he stopped and pulled his pants back up?

CALLER: That’s correct. He won that case on summary judgment. Did not win that case on anything else. So I guess right now it sounds like if Cain did what he did, which I think is wrong, but if he did what he did it does not constitute sexual harassment according to the Democratic Party and Mr. Clinton.

RUSH: Well, then there was nothing for him to confess to.

RUSH: Because he didn’t sexually harass anybody because she said stop, and he stopped; she said take me home, and he took her home.

CALLER: Exactly what President Clinton did. It didn’t affect her job, so they did not constitute that as sexual harassment.

RUSH: Well, I gotta hand it to you, that’s an interesting recollection out there. I think you’re talking about Paula Jones, not Gennifer Flowers, but six of one half dozen of the other, dollar, trailer park, that whole thing. But still, interesting point. I did notice that when we were listening to Bialek she said that she told him, “What are you doing, Mr. Cain, I don’t want you to,” and he stopped. She said no and that was it. No means no. He was not her boss at the time. Clinton was not her boss. Paula Jones, she was unemployed at the time so he had no authority over her. (interruption) Yeah. Well, that’s true, too. When Herman Cain drove the babe home she actually got there and is alive to talk about it. Have you noticed the time frame of all these allegations is the summer of 1999, 14 years ago. I don’t know, it’s interesting.

RUSH: Okay, folks, remember, Bialek is from Chicago. She was not employed by the Restaurant Association when this happened. There are no witnesses. She told nobody at the time that it happened, and he is denying it.