Opening Monologue on a Rotten Day

RUSH: Everybody ready now? Greetings and welcome, ladies and gentlemen, Rush Limbaugh, the Excellence in Broadcasting Network and the Limbaugh Institute for Advanced Conservative Studies. 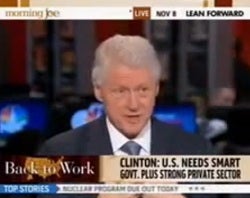 is obviously because of all this talk about sexual harassment. It must have him wishing he was back in the White House. He’s seeing how well Cain is doing in the polls. Four accusers, one of them works in the Obama regime now. One of Cain’s accusers works in the Obama regime. Four accusers and Cain’s numbers aren’t down. Clinton has got to be… can you imagine the ecstasy he’s thinking would be ahead of him?

And, by the way, random acts of journalism are breaking out all over the place, too. There is a report out today in the New York Times — see, I’m not gonna be sidetracked by this. There’s a lot of stuff out there besides this Cain business. The Cain business is what it is but there’s other stuff out there like Sarkozy and Obama and Israel. And people have forgotten, Obama went to a Jew-bash party in LA before he was elected president where this Rashid Khalidi guy was bashing Israel all over the place. The LA Times has video of that and they won’t release it. So everything is in character here as far as Obama and Sarkozy. I think this is good. Let people find out what’s really going on. They hate Netanyahu. They don’t like Israel. They’re ticked off to have to deal with it. Meanwhile, the Iranians are nuking up, and Netanyahu is the only guy who cares.

The New York Times, there’s a story out today that claims that all these bans of soda pop in the schools, guess what, folks? They aren’t working. The students are drinking just as many soft drinks as they were drinking before the government bans. And if that isn’t bad enough, there’s another report out that says higher wage earners eat more fast food than the poor. Who would have thought that? You tell me how it’s possible. I am your humble servant reporter here just passing along what the Drive-Bys are telling us. (interruption) Do I eat more fast food? No, I don’t. Well, wait a minute now. Depends on how you define fast food. My chef cooks fast. But as far as fast food restaurants, no, I don’t go. I can’t do anything in private. There’s not one thing I can do in private. My whole life is lived in a shroud. So, no, I don’t go to fast food joints. It would be all over the newspapers. I walk into a drugstore it’s gonna be in the newspapers. That’s why I don’t go anywhere.

So, anyway, I want to know what is going on. The soda pop ban isn’t working ’cause the kids are figuring a way around it. Of course this was predictable. And then higher wage earners eat more fast food than the poor. What is going on here? What are we gonna be told next? That raising taxes won’t help the economy? That manmade global warming doesn’t exist? Are we getting ready here for a flood of truth the likes of which the American people may not be able to deal with it? Is the New York Times gonna have a story tomorrow saying, “Guess what, Herman Cain’s lead in the polls is skyrocketing so much that Obama may not get reelected.” Now, world media tried to cover up this business of Sarkozy and Obama ’cause the old proverbial microphones were left open and so the suck-up media, “Oh, my gosh, we can’t report this.” It took about four or five days for this to hit. So no random acts of journalism there.

Here’s the New York Times story on the soda bans: “State laws that ban soda in schools — but not other sweetened beverages — have virtually no impact on the amount of sugary drinks middle school students buy and consume at school, a new study shows. The study, which looked at thousands of public school students across 40 states, found that removing soda from cafeterias and school vending machines only prompted students to buy sports drinks, sweetened fruit drinks and other sugar-laden beverages instead. In states that banned only soda, students bought and consumed sugary drinks just as frequently at school as their peers in states where there were no bans at all.” Kids are not stupid.

Just like the rich find a way around tax increases, here the kids want their sugar, they’re gonna get their sugar, and they find a way around it. I’m thinking… I had an interview with Donald Trump yesterday. He’s got new book coming out on America and greatness and what’s going to be required, and I asked him about the protesters down at Occupy Wall Street and all over place and what he thought that meant vis-a-vis America’s future. “Are we raising a bunch of wimps and whiners or are the Occupy Wall Street people just a small sampling of what this country has to offer?” But, you know, you compare this bunch of protesters to the sixties crowd? I was thinking about that. In the sixties, those were real guys.

In the sixties, those pantywaists were being snatched up against their will and drafted to fight in a war that they didn’t like, and that’s why — one of the many reasons — they were protesting. They were being snatched up and they were sent off to Vietnam or Laos or wherever; and in many cases it was people’s boyfriends and brothers and classmates who were being sent off to a far-off land to be shot and killed. Okay, now, whatever you think about that, that protesting that does make some sense. But what are these kids? These losers at Occupy Wall Street? What are they protesting? Student loans! (laughing) They’re upset because they have student loans to pay off and banks want to charge ’em $5 a month to use a debit card. (crying) So they form these little tent cities; the women get raped. I saw that Graham Nash and is it Stills or Crosby?

One of those two. It was Crosby. Crosby and Nash. They’re gonna go down to Occupy Wall Street and they’re gonna do a concert. Just like everybody’s reliving the sixties except back then they were protesting being sent off to a war. These kids are protesting, what? Actually these days kids are not protesting anything. They’re just down there at the direction of the White House. Obama’s fingerprints are all over this. There’s a lot of people pretending this is the sixties all over again, but it actually isn’t. All right, let’s take a break. We’ll do that and come back and we’ll talk a little bit about who this Sharon Bialek is, how the media doesn’t like the way I was pronouncing her name yesterday and other noises I was making with my mouth all coming up next.