What Happy Valley Knew About Sandusky

RUSH: You know, this Penn State story. Joe Paterno was fired yesterday. There are all kinds of rumors circulating in this story now. That’s all they are is just rumors. But this aspect of it here is interesting. This is from NBC Philadelphia. Why didnÂ’t Centre County District Attorney Ray Gricar prosecute Jerry Sandusky the first time he was accused in 1998?” which is a good question. “We may never know, as Gricar disappeared in 2005.” He was declared dead last year, and they’ve never found the body. “It is strange that Centre County District Attorney Ray Gricar never prosecuted Jerry Sandusky on child-rape charges 13 years ago, some speculate, because Gricar was known for being fiercely independent and hard on crime,” but he didn’t prosecute Sandusky. 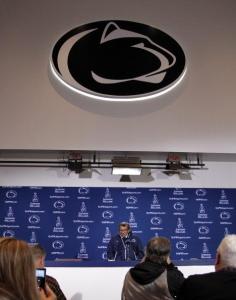 “But it is even stranger that we cannot ask Gricar why Sandusky was not put behind bars, because the tough-as-nails district attorney disappeared in 2005. And though he was declared dead July of this year, his body has never been found. ‘People ask why Ray did not prosecute, and I have no problem saying, because he clearly felt he didn’t have a case for a “successful” prosecution,’ Tony Gricar, Ray Gricar’s nephew, told The Patriot-News.” So his nephew is saying if he didn’t prosecute, he didn’t have the goods. Now, ladies and gentlemen, I was in Pittsburgh over the weekend (I was there for the Steelers-Ravens game) and that’s when I first heard about this. I don’t know. Should I mention this? I’m gonna mention this to you because as you can imagine there’s always more.

I always say, “There’s always more to a story than what is ever reported about it in the media.” This is not a media criticism. The media always knows more than they report, like the recent Sarkozy and Obama bashing Netanyahu. Look at that. It took five days for that to come out. There’s always more to a story than what is reported. I was told over the weekend by somebody who would know (I’m not gonna mention any names, but this person would know) that Jerry Sandusky’s behavior was widely known. It was not something that was quietly whispered about. It was widely known, and there were people who laughed about it and they even — don’t know who “they” is — but there was a dessert concoction created called the Sandusky.

It was an ice cream cone upside down with two scoops to portray male genitalia. Yeah, that was the Sandusky. Now, what does that mean? It doesn’t mean anything. It just means that there were some people laughing about it. I don’t know that they were involved. I don’t know who the “they” is. Yeah, okay, it’s “Gree-kar,” the DA that has been pronounced dead is Gricar. Okay, so that’s where we got the pronunciation right. I guarantee you for Joe Pa to go and the board of trustees to send everybody packing, you know there’s gonna be more coming out about this — and I wouldn’t be surprised if it’s disgusting, and there is, as I said yesterday, a huge elephant in the room here that nobody’s talking about here in terms of what this really is. Nobody. Ahem. I might be just by alluding to it, but it’s up to you, of course, to connect the dots. In Rio Linda, they get it. I guarantee you they know what I’m talking about.

RUSH: All right, I have a picture here of the Sandusky, the ice cream delight served at Penn State. I’m gonna show it to you here on the Dittocam in just a second, but let me describe it to you. Penn State makes a banana flavored Jerry Sandusky ice cream. When you see it, and this outfit here, Penn State Creamery, they have a hundred different flavors of ice cream, some of them were named after famous Penn State figures. But when you see this it will become obvious that this is named after Sandusky.

I’ll tell you a little story before I show you the Sandusky. Back when Barry Switzer was the coach of the Oklahoma Sooners, he had a Bill Clinton kind of reputation. I don’t know if it was deserved or not; I’m just telling you he did. Oklahoma goes out to play Stanford. The Stanford marching band is an independent bunch, nobody tells ’em what to do. They did the halftime display. This is, I’m gonna guess here, in the seventies, eighties, whenever Switzer was — and this is not to embarrass Barry Switzer, this just happened, I’m just telling you. The Stanford marching band dedicated their halftime display to Oklahoma coach Barry Switzer who knows how to play hard and play around, is what the PA announcer said, and they formed male genitalia and they marched from end zone to end zone, Stanford band.

So at Penn State, the Penn State Creamery, a hundred different flavors named after famous Penn State figures, one of them Jerry Sandusky who now faces felony charges, sexual abuse against minors. It’s a banana flavored desert, ice cream dish, and by reputation, it’s the only ice cream dish on the menu where you don’t have to ask if you want nuts, and there it is. This is the Sandusky on the Dittocam. (interruption) What’s that? Oh, they did take it off the menu on Monday? Oh, sorry, we just found out about it today. Darn it, we were late learning that. But there it is. As I say it’s the only dessert on the menu at the Penn State Creamery that you didn’t have to ask if you wanted nuts on it. That’s the Sandusky. I know that I might have been acting — this could have been sexual harassment if Sharon Bialek happened to be watching the program. I didn’t think of that. Well, we’ll just have to see what happens.