RUSH: From John Voorhees at Slate.com: “The congressional super committee has one week left to hammer out a deal that would provide $1.2 trillion in savings over the next decade. Think they can do it? If your answer is ‘No,’ you’re not alone. A new poll out Wednesday shows that the vast majority of Americans would bet against the bipartisan panel. The CNN/ORC International survey shows that 78 percent of those polled say that it is somewhat or very unlikely that the panel will develop a plan to significantly reduce the federal budget deficit by the Nov. 23 deadline. Furthermore –” dadelut dadelut dadelut dadelut dadelut dadelut “– Americans are more likely to lay the blame for such a failure with congressional Republicans (42 percent) than they are with Democratic lawmakers (32 percent).”

More Americans would blame the Republicans if the super committee fails. It’s just another reason why the Democrats don’t want a super committee deal. It’s not the main reason. The main reason is there was never supposed to be a deal. Obama’s campaign is based on a do-nothing Congress.

Now, this is from TheHill.com. You’re not going to like the headline, nor are you going to like the story. “Republican Leaders Preparing Rank-and-File For Deal on New Tax Revenues — House Republican leaders began preparing their members on Tuesday to accept a potential deficit deal that includes new tax revenues. The GOP co-chairman of the deficit super committee, Rep. Jeb Hensarling (R-Texas), briefed the House Republican Conference on the details of multiple offers that GOP members of the panel have made to their Democratic counterparts.

“A week before the super committeeÂ’s Nov. 23 deadline, a deal has yet to be struck, but TuesdayÂ’s meeting offered Hensarling his first chance to explain to his restive colleagues what Republicans have described as a major concession in negotiations with Democrats. Lawmakers emerged from the closed-door meeting saying Hensarling had made the case that offering some new revenue — $300 billion in at least one publicized offer — would be a good trade to secure a permanent extension of the George W. Bush-era tax rates.”

Now, I’m wondering, folks, we got this story from TheHill.com about Republican leaders preparing rank-and-file for a deal that involves a concession. I’m wondering if there is a twin piece, another media piece somewhere like this about major concessions the Democrats are making. Somehow I don’t think that story exists. And somehow I think the reason it doesn’t exist is ’cause I don’t think the Democrats are going to make any concessions. But, according to TheHill.com, the Republicans are going to make a concession, $300 billion in new tax revenue.

Now, it doesn’t necessarily mean a tax increase. You can get new revenue from taxes by cutting ’em. I don’t know what it means. Let’s read further. “Speaker John Boehner (R-Ohio) told reporters after the briefing that the GOP had made ‘a fair offer,’ referring to a proposal from super committee member Sen. Pat Toomey (R-Pa.) that would call for about $300 billion in new taxes in a total deficit-reduction package of $1.2 trillion.” Now, folks, we don’t have a revenue problem; we have a spending problem, and raising taxes is only going to exacerbate that. But here’s the next line in the story. “Despite the concession on taxes,” despite the Republicans agreeing to raise taxes $300 billion, “Democrats have rejected the GOP offer as ‘not serious.’ Hensarling received a standing ovation following his presentation, which one Republican described as ‘clinical’ and somewhat ‘detached.'”

Somewhat detached? That’s how Hensarling sounded to his own caucus? I think they’ve all sounded detached to us, for a long time. Get this. “One lawmaker who attended the conference told The Hill that Hensarling ‘did say that what with the statutory obligations that have been set before us, let alone the statutory goals — donÂ’t be surprised if theyÂ’re not met.'” So that means that even $300 billion in new taxes won’t meet the goals? Sheesh. What part of “taxed enough” already don’t Republicans seem to understand? Did we dream up that whole year of 2010? Did we dream up the midterm election results? Did we dream up the whole Tea Party existence and its reason for existing?

So, according to this story — and again, I won’t be surprised if I get a call from somebody in Republican leadership’s office, “That Hill story is dead wrong, they misquoted us, they’re not reporting the truth.” I wouldn’t be surprised, but what we have to go on is this story, and it seems to be that the Republican plan is to trade $300 billion in new taxes for a permanent extension of the Bush tax rates. But the problem is that nothing is permanent in Washington. Obama’s been trying to undo the Bush tax rates for as long as he’s been there. There’s nothing to stop the Democrats from ending the Bush tax rates after they get this $300 billion in new taxes, but apparently they’re not gonna take it. They’re refusing the $300 billion tax increase.

So maybe what we’ve really got here is a sleight of hand trick by the Republicans. “Okay, okay, you guys want some tax increase, you want some new revenue, here’s $300 billion.” The Democrats reject it so that we can then say they don’t want a deal, they’re going to try to blame us for no deal. We’ve asked them, we’ve given them what they’ve asked for, and they still turn it down. Maybe that’s the plan. Yeah. Yeah. (interruption) The Democrats were insulted not just by the extension of the Bush tax cuts. The Democrats say they’re insulted by $300 billion. It’s paltry. But the hope here at the Limbaugh Institute for Advanced Conservative Studies is that this is a trick, that these guys know that the Democrats don’t want a deal, that these guys know the whole point here is to have no deal and have it blamed on the Republicans. So Hensarling lets it be known to the media, “I told my caucus, we’re willing, okay, you keep the Bush tax cuts intact and we’ll find $300 billion in new tax revenue.” The Democrats say, “Nope,” reject it out of hand.

Let’s go to the audio sound bites. I mentioned I heard Paul Ryan on Fox this morning. It was Brian Kilmeade who said to him, “Let’s talk about super committee. You’re not on it. You said you didn’t want to be on it. I’m sure you would have been put on it. Now, sitting inside ten days, we see Republicans yesterday were optimistic; Democrats weren’t. In reality, where’s the progress?” 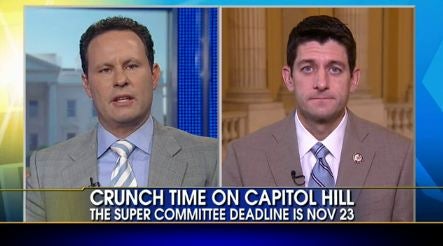 RYAN: We’ve offered solutions. Our negotiators in the super committee put forward plans to actually accomplish this objective, and we put forward plans that we thought Democrats would agree to. They keep seeming to move the goalposts and walk away from the table. Pat Toomey, our Senator from Pennsylvania, put together a plan to replace the Bush tax cuts with tax reform — lower tax rates, broadening the base, meaning get rid of the loopholes — and that actually brings in more revenue. So our negotiators already said: Let’s replace the Bush tax schedule, lower everybody’s tax rates, get rid of the loopholes and reductions and you bring even more revenue into the federal government — more importantly, you grow the economy and create jobs — and that is what we offered, and that’s what the Democrats walked away from.

RUSH: Okay. So I heard him right. “We’ve offered all kinds of things. We’ve even offered to replace the Bush tax cuts, and we’ve shown ’em how it’ll create more revenue.” It’s not about revenue. The Democrats are not about increasing revenue. Increasing government is what they want to do, and the way to do that is take money out of the private sector and people’s pockets who live there, you and me; and the way to do that is to raise our taxes. They’ll take money out of our pocket, it will cause economic growth to slow down even more, but it will transfer more money to Washington — and even if it doesn’t significantly increase revenue that much, it still increases government power by keeping the private sector small and shrinking, which is what the Democrats want.

They are rejecting solutions! They are rejecting programs which solve the problem, which will grow private sector jobs, will grow the US economy, because they want the government getting bigger. “What’s wrong with the government getting bigger, Mr. Limbaugh? That’s where people get taken care of.” No, it’s not. If a big government equals “people being taken care of,” why is there so much squalor, unemployment, and all the other things you continually whine and moan about, Mr. New Castrati? “Because the program is uncompleted! It’s not finished yet; the Democrats have not finished their great compassionate work.” Well, it’s true they haven’t finished their work but it’s not rooted in compassion, Mr. New Castrati — and it depends on absolute blithering idiots like you for success. Here’s Jeb Hensarling himself last night Larry Kudlow’s show, CNBC. Kudlow said, “Moments ago the super committee broke up for the night. No new deal. I want to ask you about the threat of super tax increases that could sink the economy.”

HENSARLING: Uh, not gonna happen, Larry. I mean, listen, we’re facing a jobs crisis and a debt crisis. We’re certainly not gonna exacerbate one by trying to address the other. Uh, frankly, that’s one of the reasons that we are somewhat stymied at the moment. We have come forth, frankly, with a very good-faith offer of putting some tax revenue on the table, but only if we do it in a pro-growth fashion to broaden the base, bring down rates — uh, which is what every, frankly, other bipartisan effort has done. That would help unleash pro-growth economics by one study —

RUSH: Okay, so that’s the old cut taxes, create more jobs, i.e., more taxpayers, i.e., more revenue. That’s their proposal. Democrats want no part of it. That’s Reaganomics. They don’t want more revenue. They don’t want more jobs. The Democrats are gonna reject these concessions. They reject $300 billion in new revenue, via new tax policy. The choice is easy, folks: Either the Democrats are hopelessly incompetent or they want this. There is no third option. Nobody is this stupid. This is incompetence or purposeful — and if it’s purposeful, who are the saboteurs? That is what is happening.