Bachmann Would Fight for America

RUSH: Last night On the Record, Greta Van Susteren. She had as her guest Michele Bachmann, Republican presidential candidate. Van Susteren said to her, “Rush Limbaugh said today that any Republican is electable and President Obama is the one who’s not electable. Do you agree that the full compliment of all the candidates can beat the president?” 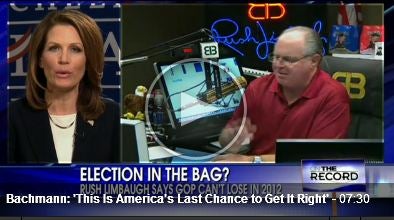 BACHMANN: Oh, without a shadow of a doubt. Like most things, Rush Limbaugh is exactly right on target, because President Obama is widely unpopular across the United States. That’s why the key message is, “We don’t have to settle.” This is a highly unusual election. This is America’s last chance to get it right. We’ve gotta get the country back on the rails. I’m in Charles City, Iowa, tonight. People here are extremely upset with the president of the United States. I can tell you, there’s not a lot of love lost on the president. Not personal, not vindictive; they just see that he’s absolutely ham-handed in the way he’s handling the economy and foreign affairs. They’re done with this president. Rush Limbaugh’s right.

RUSH: Ahem. Michele Bachmann. I have said on countless occasions: She’s one of the candidates that if she were to secure the nomina, if she were to be elected president of the Unites, I have not a shred of doubt that she would be fighting for this country every day, she’d be fighting for it exactly as she talks about it. If there was ever anybody who would govern as they campaign, it’d be Michele Bachmann — and you could say that about almost every one of the Republican candidates seeking the office.