RUSH: It’s clear that Obama does want to win, and it is clear that he’s… Grab sound bite number eight. This is what he said last night in New York City. He was at a campaign event, and outside he’s got the Occupy Wall Street people protesting, a hundred of them, and they’re all bent outta shape. They feel betrayed because he’s raising money from the people they hate. He’s raising money from the 1%. Here’s what he said. He said, “Real change, big change is hard. It takes time. It takes more than a single term. It may take more than a single president.” This is Obama. And then this is the same place he said, “Look, I’m gonna need a second term to fully implement health care. I can’t be dispatched now. It’s gonna take time.”

It’s exactly what I told you they were gonna do: “You can’t change horses midstream; it was much worse than I thought.” He’s sending a message here: “Look, progressives, you want the same thing I want. We want to totally transform this country. We want to bring about a socialist command-and-control state. I can’t do it in one term! I just can’t do it all in one term. It’s not as easy as I thought it was gonna be. I need another term, and it may take Biden in 2016 succeeding me. It may take more than me!” He’s probably pulling what little hair he’s got left out, saying, “What more can I do? My gosh, I gave you health care; nobody else gave you that. I’ve got all this stimulus spending. I have created all this unemployment. I have totally destroyed the private sector economy. I’ve gonna the public sector like crazy. All the teachers are getting their pensions and all the firemen and everybody else. These federal workers are getting their pensions for not working, retire at ten years old and forget it. What more do you want?” 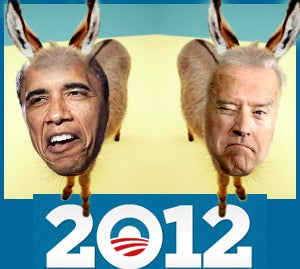 And of course the left can never be happy no matter what they get. Before we go to the break here and grab more phone calls, I want to go back to this James Taranto piece that I quoted earlier in which he said: “Why would Democrats advertise that they’re giving up on the ‘white working class’?” He writes, “As we noted in August, the summer’s debt-ceiling deal left these people thoroughly demoralized. Some of them blamed the American people, some blamed Tea Party ‘terrorists,’ some blamed Obama — but all had the sense that Obama was a loser. The rise of the so-called Occupy Wall Street movement, combined with Obama’s more confrontational tone, lifted their mood, but it was a temporary high.

“The urban encampments turned out to be squalid Obamavilles, not an American Arab Spring or a liberal Tea Party. Most of them are gone now, victims of bad weather or health-and-safety ordinances. And with Obama having scored few victories on Capitol Hill or in public opinion, the left could return to its summer funk any day. It is important for them not to believe that all is lost — that Obama still has a credible shot at re-election. Openly ceding the WWC to the GOP, even if it actually ends up harming Obama’s re-election prospects, may be the price these strategists feel they have to pay in order to make credible their claim that Obama has any path to victory at all.” That sounds pretty bleak, doesn’t it? They have to advertise abandoning the working white class voters in order to give them any chance at all at winning.