RUSH: On MSNBC this morning, been wringing their hands. They’re very sad at MSNBC. They’re trying to figure out who is going to be the next… Oh! Mike, we’re gonna have a gay community update today. Grab Klaus Nomi and have it standing by. Thank you. Its’ been a long time since we’ve had a gay community update on the program and we have one today. It’s coming up. (interruption) No, at MSNBC they’re wringing their hands over there over who is going to be the next lesbian, gay, bisexual, transgender leader in Congress. Now, that Barney Frank’s seat is wide open. They were really worried about it, and all this time thought that banner represented the fishing industry and they took it away from him in redistricting and so I couldn’t (impression) “w’un anymore” because I just not gonna abandon the fi’theries,” and now I learn that he was the leader of the lesbian, gay, bisexual, transgender caucus or population. You learn a lot of things watching MSNBC. The New York Times today. Get this, now: The New York Times today in an article on Barney Frank called him “prickly,” and I think they probably meant that as a compliment given that the New York Times said it. Can you imagine what would happen if I described Barney Frank as “prickly”? (interruption) No, I’m not gonna be blamed for it. 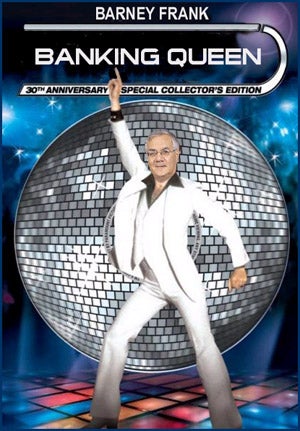 And here is Barney’s answer…

FRANK: I wouldn’t call him evil. Hitler was evil. Saddam Hussein was evil. Uh, Stalin and — and — and many of his successors, Mugabe. In Gingrich’s case, there was an unusually heavy preponderance I think of the, uh, bad qualities. He got Tip O’Neill furious because he used to stand, as you know, in the well of the House at a time when the TV cameras only showed the Speaker and didn’t show that there was nobody there, and he would say to empty seats, “I say you Democrats are traitors, and if you don’t agree with me, stand up and say so. Have the courage to say so.” He was saying that to empty chairs. That made Tip change the whole way that the cameras were there.

RUSH: He’s talking about special orders, and this was in the eighties, and this is where Newt made his bones. Do you remember those? Do you believe watching those, Snerdley? I was working in Kansas City, and I’m telling you, I made it a point to watch every time. It wasn’t just Newt. He had some of the… They were called the Conservative Opportunity Society at the time. Dick Armey got in there, Kemp I think was part of it. The House chamber was empty, except for these guys. Standard business was over, but as long as somebody wanted to go speak, the camera from C-SPAN televised it, and what happened to those special orders was dynamite, because every day Ronald Reagan was being savaged! He was being attacked.

These were the days of the Boland amendment, the Contras and Nicaragua, all of this stuff — and Gingrich and the boys were defending supply-side economics. They were defending everything Reagan is doing, and it’s what put Newt on the map. This had to be 1983, because that’s when I left the Royals and went back to work in radio, and it might have been ’82, but one of those two years — and it did work. You know, Tip did get ticked off cause it was effective. But Newt didn’t do this stuff. He didn’t stand up and say, “You people are traitors! Stand up and defend yourselves if you’re not!” He didn’t do that. Barney is just making this up. The thing about Barney Frank is, I don’t know anybody who thinks he’s a nice guy. No. Barney Frank is one of the nastiest people that you’ll ever run into. Ask anybody. They have never seen him in a good mood. Never seen him. In fact, in one of the articles praising Barney Frank to the skies quoted him as saying, “One of the advantages of me not running for office is I don’t have to pretend to be nice to people I don’t like.”

He probably was talking about the “fishing industry,” but who knows.