RUSH: So what was it, about three weeks ago or month ago Coca-Cola decided that — and it always amazes me, these supposedly smart companies. You know, Coca-Cola considered to be one of the smartest marketing companies out there, they’ve really only made one mistake, and that was 1985 and they came out with New Coke, and it didn’t work. In fact, I remember it was such a disaster, Larry King had his show… No. No, no, no. Before Larry King had his show on CNN, the gal that hosted that hour on CNN was a blonde named Sandy Freeman, and her husband was a big time agent or lawyer or something (it doesn’t matter to anything; I’m just remembering this) and she had on at the time the current CEO of Coca-Cola, a guy named Roberto Goizueta. 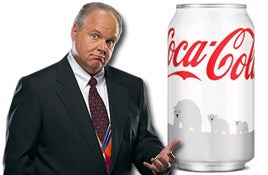 It was Roberto Goizueta and his administration and Coke that had gone to New Coke, and he brought it on that show and everybody is tasting it, rendering their opinions on it. I remember this Goizueta guy, he was very, very suave and “de-boner.” That’s “debonair,” for those of you in Rio Linda. Debonair. (impression) “Sandy, you know, we at Coca-Cola do extensive researcher, Sandy.” Anyway, didn’t work, and they had to come up with I mean a microflash and that’s how Coke Classic came to be. They had to go back to the original because the New Coke tint work. Well, they’ve done it again. They did it again. They’ve come out and decided, just like these people at GE, to “go green.” See what happened here, people in corporate America a lot of times are followers, and if they think a large enough segment of the population believes this global warming green energy crap?

Well, even though they’ll come out with products with green packaging or some green aspect to it in their marketing or advertising. The product isn’t any different, they just packaging it or marketing it differently because they think that they can convince consumers that they’re saving the planet by buying this predictable product. It’s their business to sell things. So Coca-Cola decides, like years late on this,that they’re gonna get in on the polar-bears-are-dying craze. The problem is the polar bears aren’t dying and this has been established or affirmed over the recent number of months, maybe years, but they decided to come out with a white can for Christmas, with a mom and a couple of baby polar bears on it with the notion that some of the proceeds are gonna go to the save the polar bear fund.

When I announced this, when I heard about it, talked about it, they tried to make money off the lie that polar bears are being killed here, and if you buy Coca-Cola somehow the polar bear population is gonna be saved and I ripped it, and I pointed out: We at Two If By Tea, we don’t do any of that. We don’t insult the intelligence of our consumers. We’re not hipsters and we’re not trendy in the sense that we try to tie into fads; we create the fads, if there’s any fad going on. We’re just straightforward. We fill our stuff up to the top of the neck of the bottle. There’s no gunk in it. It’s the best tasting iced tea out there. Oh, Kathryn’s gonna probably shoot me but we start bottling the two new flavors soon, folks. I cannot wait.

We finished three months of exhaustive taste testing coming up with just the right flavors and we start the bottling process soon of these two new flavors and we’re excited as we can be about it. We’re never gonna do anything for the polar bears. What we do is for the Marine Corps-Law Enforcement Foundation! That’s who we sponsor. Because the polar bears are fine. Don’t misunderstand. Anyway, Diane Sawyer at ABC had the details. This is on World News

Tonight. It was actually Jim Avila report out there about Coca-Cola canceling the special white can for the polar bear.

SAWYER: We all remember the outcry back in 1985 when New Coke tried to replace our old friend, the Classic. Well, the Coca-Cola company is scrambling again tonight. Here’s ABC’s Jim Avila.

AVILA: A holiday promotion designed to raise money for polar bears, now cut short because of consumer backlash. For some Coke drinkers, the white can is anything but “The Real Thing.” Some Coke drinkers complained the soda in the white can tastes different. Coca-Cola says this was part of the plan all along, but distributors were informed only this morning to expect a return to the iconic red by next week.

RUSH: That was all part of the plan to have the white can out there for a couple of weeks? Now, see, this is the danger you run. I’m sure that there’s no difference in what they’re putting in the cans, but people think it tastes different. The original Coke error back in 1985 was not an advertising mistake. They actually changed the formula. And Coke, the modern era of Santa Claus, Coca-Cola… This is how slick they are, how good they are. Our modern media version of Santa Claus owes a lot to Coca-Cola. In their old advertising. They’re that good. They have been that good, and they said this white can was gonna run through February when it originally came out. So they don’t make very many mistakes, but this is one. 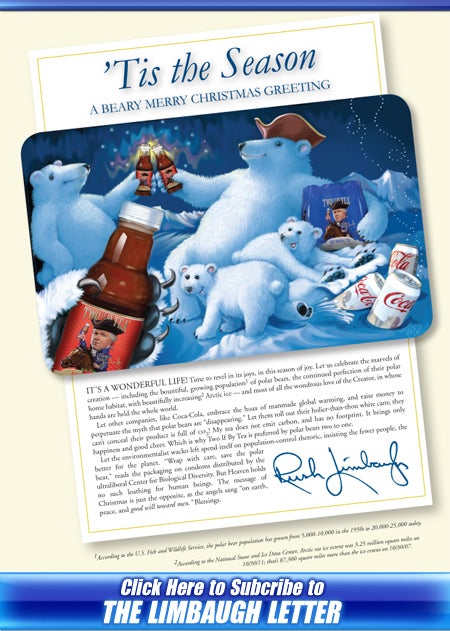 RUSH: Now, those of you watching on the Dittocam, I’m gonna show you something. This is the back page of the December issue of the Limbaugh Letter, which is on the way to subscribers even now. It’s a Christmas card from all of us to you, and you see that we’re making fun of Coca-Cola and the white cans and the polar bears — and, of course, the larger bottle there is Two If By Tea. That’s on the back page, a little script underneath it as you can see (which you can’t read I’m sure),m but that’s it, and it’s on the way to you. I had a visitor come by yesterday. We’ve got this issue of the newsletter laying around is office here.

The visitor picked it up and looked at it and saw the Coca-Cola cans and knew exactly what was going on. The visitor asked, “Can you do that? Can you do that? Can you? Can you put Coke in that? Can you?” Yeah. We did it. We did it. Two If By Tea is in there, a little six-pack and a big bottle, and the polar bear is dressed as Rush Revere. I understand these people, folks, and we laugh at ’em — and, of course, Coke is having to turn it around. (interruption) No, I’m not trying to make an enemy out of Coca-Cola here. I’m just saying: When people go political, then they become fair game on this program, pure and simple. Doesn’t matter. You go political, and you are in the arena, and then we are gonna comment.