RUSH: You know, there’s some weird stuff out there today. Well, for example, in Saudi Arabia… Have you heard this? In Saudi Arabia, they are… Honest to God here, this is UK Daily Mail. Let me just read the headline: “Saudis Fear There Will Be ‘No More Virgins’ and People Will Turn Homosexual If Female Drive Ban is Lifted.” I don’t know how it works. I haven’t been to Saudi Arabia, but women are not allowed to drive in Saudi Arabia, and there’s a big move on to let women drive, as you know. It’s not being mounted by our feminazis. This is something happening within the realm of the kingdom. And they’re thinking about it, and one of the objections have been, “No, no, no! If we let the women drive, there aren’t gonna be any more virgins and people will turn homosexual.” 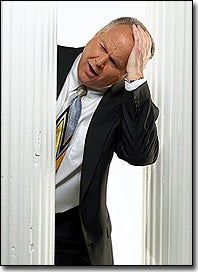 It’s right here in the UK Daily Mail — and it’s a government report, so it must be true. I mean, this report is just as credible as Obama’s jobs report. Here it is. ” Repealing a ban on women drivers in Saudi Arabia would result in ‘no more virgins’, the country’s religious council has warned. A ‘scientific’ report claims relaxing the ban would also see more Saudis – both men and women – turn to homosexuality and pornography. The startling conclusions were drawn by Muslim scholars at the Majlis al-Ifta’ al-A’ala, Saudi Arabia’s highest religious council, working in conjunction with Kamal Subhi, a former professor at the King Fahd University.

“Their report assessed the possible impact of repealing the ban in Saudi Arabia, the only country in the world where women are not allowed behind the wheel. It was delivered to all 150 members of the Shura Council, the country’s legislative body. The report warns that allowing women to drive would ‘provoke a surge in prostitution, pornography, homosexuality and divorce’. Within ten years of the ban being lifted, the report’s authors claim, there would be ‘no more virgins’ in the Islamic kingdom. And it pointed out ‘moral decline’ could already be seen in other Muslim countries where women are allowed to drive.

In the report Professor Subhi described sitting in a coffee shop in an unnamed Arab state. ‘All the women were looking at me,’ he wrote. ‘One made a gesture that made it clear she was available… this is what happens when women are allowed to drive.’ The astonishing report comes after Shaima Jastaniya, a 34-year-old Saudi woman, was sentenced to 10 lashes with a whip after being caught driving in Jeddah.” Now, we have in this country a long history of women driving, did we not? Our resident expert on women here is Bo Snerdley. Now, does any of this compute with you?

See, I think when you’re talking about driving something virginity, it seems to me that parking is what leads to no more virgins, not driving. But what do I know? At any rate, this is out there. In Afghanistan — have you heard about this? — a woman was raped, she was blamed, and her punishment is marry the attacker. I’m not kidding you. In Afghanistan, a woman was raped, she was held responsible for it (as is often the case in Islamic societies) and her punishment: After some years in captivity, she has to marry her attacker. See, now, folks, now you understand why this bunch in Saudi Arabia say, okay, if women can drive, bam! She’s out of there. You let women drive after being forced to marry rapist attackers, then they’re gone — if they have a car, if they get a hold of a car.

And then there’s this, from the UK Daily Mail. Somebody is going to have to explain this to me. “A woman has been accused of aborting her unborn baby boy after a dead fetus was found dumped in a New York residential rubbish bin. Yaribely Almonte, 20, has become one of only a handful of people in the city to ever be charged with the offence, following the gruesome discovery in Washington Heights, Manhattan. A superintendent found the seven-inch long fetus, which still had the umbilical cord attached, on Tuesday night while tying up a garbage bag. He said: ‘When I found the baby, I didnÂ’t know if it was real at first. It was so bad. After that happened, I just stayed in my apartment for a while because I didnÂ’t feel well.’ Police have now charged Almonte, who reportedly rented a room in the building at … for only a short while before moving out, with self-abortion in the first degree.”

That’s what she’s been charged with. How can any woman be charged with abortion? (interruption) Yeah? After six months, you have to go to Planned Parenthood? You can’t do it yourself? Are you telling me…? You are telling me that in New York a woman pregnant beyond six months cannot do a self-inflicted miscarriage, that is a crime, but if the same woman would walk into a Margaret Sanger joint, Planned Parenthood or a neighborhood abortion clinic found on Siri (not found on Siri), that everything would be hunky-dory and fine, that you cannot self-abort yourself but somebody else can and you can be charged?

This is murder here. [I]t is not known how old the foetus was, the charge is only used when the abortion occurs after,” you’re right, “24 weeks of pregnancy.” I’m cursed with an undiluted, full-fledged, logical mind. If this, if self-abortion is an arrestable crime, why is going to Planned Parenthood for the same thing not? I don’t understand. I’m sorry. (interruption) Well, you see, and that is the key, ladies and gentlemen. See, this is why you take women’s studies. I’m not supposed to understand this. None of us are. In fact, we’re not supposed to even bring it up. We aren’t supposed to ask this — and we certainly are not to insist on an answer. This is none of our business. (interruption) You’re absolutely right. This is a case for women’s studies. This is why you get a degree in it. All right. Fine and dandy.