RUSH: As a fellow broadcaster, I probably shouldn’t say this, but that just means I will say it. I have to note and call attention to something. Oprah — and I will leave it to others to answer this, even though I have the answer. Oprah had, we were told, the highest-rated daytime television talk show ever, for a long time while until it leveled off and like all shows eventually (except this one) started to bleed a little audience. 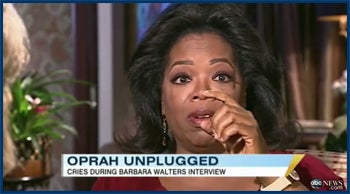 But it was not even close, right? I mean, Oprah’s ratings were just incomparable, there wasn’t a thing you could do about it, and the TV stations have had Oprah’s show, their five o’clock news led the market they were in because of Oprah’s lead-in. So Oprah. as many media people do, burned out, got tired, and wanted to do other things. So she went the executive route and started the O Network and the O Magazine and the O this and the O that, and nobody cared. The O Network, and all this, and nobody cared. It never amounted to a hill of beans. So they put Oprah back on the air at the O Network, and that didn’t make any difference; and they put Rosie O’Donnell on the O Network, and that didn’t make any difference.

The point is, my question is, how do you put something on over-the-air syndication television for however many years she did it — with just over-the-top, incomparable, nobody-even-close ratings — and then a year after she’s gone put her back on the air and nobody watches. How does that happen? What does that maybe mean about the over-the-air television show’s ratings? Just asking. Juuust asking. But anyway, that’s just a sidebar question, a think piece. I’m not… (interruption) What, the Labor Department running Oprah’s rating numbers? Well, you said it. I’m just throwing it out there. How does this happen? We know it does, but how do you go from a stand-alone number one, nobody even close to just a year later nobody caring that you’re back on the air? Now, in my case… Well, no, I shouldn’t — I shouldn’t — I shouldn’t — I shouldn’t.

I just I find it… If Oprah was that popular, why didn’t her audience follow her wherever she went and find her? And it wasn’t hard. I mean, all the PR in the world told us every week where Oprah was gonna be: O Magazine, O Network, O on her own show, O doing the executive, O doing a movie, O this. Take her off the daytime syndication show, and the audience doesn’t care anymore?