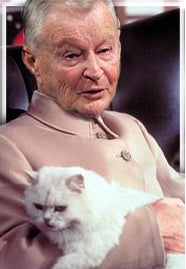 BRZEZINSKI: The United States is becoming, rapidly, one of the most socially unjust societies in the world — and that is raising basic questions about the relevance of the West to a world that is new universally awakened, staring, restless, conflicted. Social disparities between the rich and the poor in the United States are now the most severe in the world. There is a measure called “the Gini coefficient” that measures social inequality. In the United States, it’s at the top of the list.

RUSH: The what? The Gini coefficient? (impression) “In the United States, it’s now the top of the list.” I feel like I’m listening to a Bond villain here. “The United States rapidly becoming one of the most socially unjust in the wooorld in the area of foreign policy at which I excel. I alone permitted to make this judgment (sniffing) and I look at the United States and I see this widening gap of rich and poor. I myself am rich, but I deserve to be rich because I’m smarter than all the rest of you plebes. (heavy breathing) But nevertheless I deserve to be rich and I deserve to pay no taxes because I’m smarter than rest of you, but the social injustice in our culture and our society, what it really means is, I’m not being invited to the right parties anymore, because I worked for that dummkopf Jimmy Carter.”

What are we talking about here? “One of the most socially unjust societies.” Zbigniew Brzezinski, and he wasn’t finished.

BRZEZINSKI: Secondly, do you know that in America, if you are born poor your chances of dying richer than your parents are lower now than in Europe. Europe has more social mobility upwards than in America. That is a very serious problem!

RUSH: That is also equally absurd. Now these people are just making it up. Now they’re just throwing it up against the wall and hoping it will stick. (impression) “Of course, he’s talking about since Obama came into office, but this — this — this is not because of Obama, happened to — to — Obama came into office but it’s not because of Obama. (sniffs) Obama is doing everything he can to right the ship! Uhhh, Obama is doing everything he can to, uhhh, shrink this gap of social un-justification, justice, make us — make us, uhh, more like the prosperous nations of Europe and so forth where the banks are barely able to stay open, last I looked.”

RUSH: All right, by the way, if you’re wondering about the Gini coefficient, that’s not a genie in a bottle. The Gini coefficient that Zbigniew Brzezinski was referring to here is a guy by the name of Gini, G-i-n-i, and he wrote a paper called “The Scientific Basis of Fascism” in 1927. This is who Zbigniew Brzezinski happened to be citing. Mussolini loved it! Mussolini thought “The Scientific Basis of Fascism” in 1927 was fabulous. This guy, Gini — Corrado Gini is his name — was born May 23rd, 1884 died and died 1965 in March. He was big on controlling the population. He was Italy’s Margaret Sanger. He established the Italian Committee for the Study of Population Problems. He was a statistician, demographer, sociologist, and he developed what is called a Gini coefficient. It’s “a measure of the income inequality in a society.” He was a fascist, theorist, and ideologue who wrote The Scientific Basis of Fascism in 1927 and that’s who Zbigniew Brzezinski is citing, and that’s how he is arriving at the notion: A fascist theory to explain income inequality in the United States.