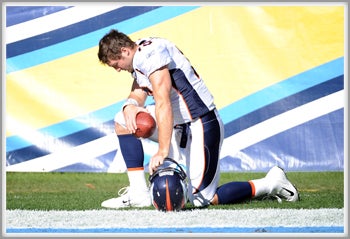 Oh! It was Rex Grossman, and, of course, they did go to the Super Bowl with Grossman, but Grossman wasn’t the reason. I can remember Lovie Smith at the press conference (impression), “The quarterback position…” He talked about it as though it was just any other position on the field. So they’ve got this back up to Cutler, Caleb, and he’s had three INTs in the past couple weeks. It doesn’t look promising. So after the action yesterday, the word spread the Bears might rethink calling McNabb to come in and at Lovie Smith’s press conference, he said, “No way! We are not calling anybody! We’re not bringing anybody in! We’re gonna use what we’ve got.” So you Bears fans, I feel for you, but Lovie is being consistent: The quarterback position is the same as any other position on the field.

Yeah, I saw the Denver game. I see every game, Snerdley. I have DirecTV Sunday Ticket. Speaking of that, there’s a great piece — and I mentioned this earlier — that somehow made it into USA Today. Oh, I’m sorry! It’s USAToday.com. That explains it. I don’t know that it made the dead tree version of the paper. I haven’t seen a dead tree version. I was trying to think the other day the last time I actually “read” a newspaper. It has to be years. I do it all now online as a lot of people do. Anyway, this is a piece by a guy named Larry Taunton, T-a-u-n-t-o-n. He is “the director of Fixed Point Foundation, the author of The Grace Effect: How the Power of One Life Can Reverse the Corruption of Unbelief,” and he has a piece here on Tebow at USAToday.com.

“Riding a Bronco to the rescue is former college football superstar Tim Tebow. Here is a young man of whom we can all be proud. He is clean-cut, articulate, humble, gracious in victory, hard-working, and, if that weren’t enough, he’s a humanitarian. No, not one of those ‘humanitarians’ who does his giving in the public eye, but a humanitarian who gives quietly in the orphanages of the Philippines. There is only one problem. Many in the news media don’t approve. Yes, these same commentators who bemoan the decline of football civilization continually tell us that Tebow isn’t good enough to be in the NFL. That alone is not unusual. The list of Tebow-hating commentators is long: Boomer Esiason, Colin Cowherd, and Merril Hoge to name only a few.

“Of course, we expect our sports jocks to give us their opinions, and sometimes that means evaluating the prospective talent of players coming up from the collegiate ranks. Tebow is no exception to this and, while still a quarterback at Florida, there was some question about his ability to play that same position at the professional level. Only here’s the thing: The current wave of criticism leveled at Tebow isn’t about football. Not really. Oh, they will all swear that it is. Tebow’s shortcomings as a football player are expounded upon every week: He lacks accuracy, experience, and football I.Q. (we all know that you must be an intellectual to play [football]); the offense he is best suited for will never work in the NFL; he can’t adapt to the professional game,” and on and on and on.

“Our cue, however, that Tebow’s numerous critics aren’t motivated by a desire to protect the integrity of the sport from unworthies is revealed in the manner of their critique. To say that they have reserved a special kind of venom for Tim Tebow is an understatement. Indeed, to hear them speak, one imagines the Denver Broncos are quarterbacked by Betty White. Only here’s another thing: Tim Tebow’s football credentials are impeccable,” and, by the way, there is a website called Cold, Hard Football Facts and it is one by a guy named Kerry Byrne, and Kerry Byrne gets the quarterback rating or the passer rating in the NFL. Is it the passer rating or quarterback rating? I forget what it’s called. It’s what everybody reports. They have added to it.

They’ve added a couple of stats to it beyond passing — turnovers, this kind of thing — and, according to their analysis (and it’s a few games, not a lot Tebow’s played), he’s outperforming every quarterback he faces. He’s playing better than every quarterback he faces in the games that they’ve won. He’s 5-1 with the Broncos. It’s inescapable. Tebow is playing; the idea he can’t play is ludicrous. This is this guy’s point. “Tebow isn’t, to be sure, playing at the level of New Orleans Saints quarterback Drew Brees, but who is?” Now, this is a great question: “Do we hear lengthy discourses on Curtis Painter’s or Tyler Palko’s ability to play in the NFL?” Painter is the quarterback at Indianapolis for Manning, Tyler Palko the Chiefs. They’re not having this.

Tebow’s outplaying them like the lights out but the with sports media is not telling us how these guys can’t play, and they gotta be run out of the league and they are worthless, and they don’t have what it takes. But they are telling us this about Tebow. Despite the fact that “Tebow is winning. How dare he. Who does he think he is? Now 5-1 as a starter, Tebow’s critics are indignant that [he] didn’t pack his cleats and go home the moment they declared him inadequate. The simple fact is, they want him to fail. And now, after so much ink and vitriol predicting [he would fail, they need him to fail,” just like I said they needed Sarah Palin to fail after setting that up.

“So what gives? Why does even Tebow’s own coaching staff and management offer so little public support” for the guy? Well, you and I all know the answer, here. “Jake Plummer, the latest to take pot shots at [Tebow], might have been speaking for anti-Tebowites everywhere when he said in an interview on a Phoenix radio station that he would like Tebow more if he would ‘shut up’ about his faith in Jesus Christ.” Just shut up about that and it’s okay, Tim! “And with that little comment, the cat, as they say, was out of the bag. Plummer said what the commentators wouldn’t say. Their dislike for Tim Tebow is not, as they would have us believe, about his throwing motion or his completion percentage; it’s all about his open professions of faith and his goody-two shoes image. When it comes right down to it, [American culture today doesn’t] want heroes who are truly good.” 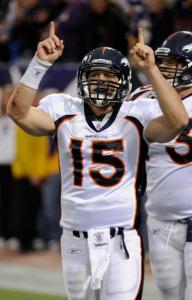 Instead, “We wait for evidence that he really isn’t that good. We hope to see him kick a player on the ground, drop an F-bomb on television, or Tweet pictures of his privates” like Anthony Weiner. “In the meantime, we always have Penn State’s Jerry Sandusky to make us feel better about ourselves,” because, in the end, Tim Tebow makes the sports media realize… You fill in the blank. That’s “Larry Taunton is the director of Fixed Point Foundation and author of The Grace Effect: How the Power of One Life Can Reverse the Corruption of Unbelief.” Now, obviously, this guy is also a man of faith. But aside from that, I’ll tell you the reason why this piece appealed to me is that this one thing here at the end: Our culture does take people, set ’em up to knock ’em down.

There is a psychology behind that, and the psychology is rooted in inferiority. We don’t want anybody to be better than we are so that we don’t have to deal with how bad we are. If everybody’s a scumbag, then everybody can be a scumbag. But if there’s somebody who’s not a scumbag who does well, well, then maybe it’s not okay to be a scumbag. It’s the whole liberal thing about not wanting judgment out there. It’s also about the fact he’s highly visible on his love of Jesus Christ. That just makes ’em nervous, ’cause the people who don’t believe in Jesus Christ are the ones who are bothered.

They may even go to church every Sunday or whatever, but they don’t really believe in Jesus Christ. Tebow smacks ’em in the head with that, too. That makes ’em uncomfortable, but this guy’s right. There’s everything in the world to admire about the guy, “except that Jesus business.” That just drives people nuts. He says thank you. He calls reporters “mister.” He does all this charitable work behind the scenes. He gives credit to his teammates. He has no ego whatsoever. He’s got his own general manger — John Elway — hoping he fails. Well, it appears that way. Elway, two games ago, Tebow scores a winning touchdown and Elway is applauding like he’s at a golf tournament. And they asked Elway, “Have you found your quarterback of the future?”

“No way,” he said. “Has to be better on third downs! He’s gotta throw the ball better, damn it! He’s gotta throw the ball better, gotta be better on third down. No, we haven’t found our quarterback yet,” and despite that, despite that! You think your boss hates you? Despite that, Tebow’s out doing what he’s doing and not whining and not complaining, and that people don’t like. Meanwhile, we’re romancing the Occupy people. We’re romancing Obama. We’re romancing society’s corrupt perverted losers, because in a comparative thing, who doesn’t look better than somebody defecating or urinating all over themselves? So we’re kinda happy to have ’em out there. In comparison, we look pretty good.