RUSH: This is Will in Amanda, Ohio, as we stay on the phones. Hi, Will. Welcome to the program.

CALLER: Hey, Rush? Hey, Rush, at best you don’t understand the Tea Party movement, and at worst you’re trying to co-opt the Tea Party — and I hate to say that because I’ve listened to you for a lot of years — but the Tea Party movement is about trust, justice, and constitutional leadership; and Newt Gingrich is the RINO’s RINO. He’s taken several hills from Fannie Mae and Freddie Mac, he plays both sides of the aisle, he’s well known for his progressivism. If his multiple wives don’t trust him, don’t expect me to trust him as a president for this country. The Tea Party’s not about Republican[s] and Democrats. The Tea Party is about, like I said — trust, justice, and constitutional leadership — and at this point we’re down to three candidates, in my opinion. We got Ron Paul, Michele Bachmann, and Rick Santorum — and I’m leaning towards Ron Paul because at least in Congress, for all his years, both sides call him Dr. No because he’ll at least stick to the Constitution, what it requires. 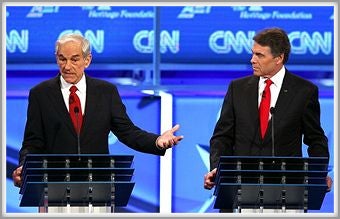 CALLER: And we’ve gotten into this mess, Rush, because we’ve always chosen the worst of the two choices. And this is probably our last chance. This country is going down fast.

RUSH: Are you telling me … that the Tea Party … is gonna end up rallying around Ron Paul?

RUSH: Where is that reflected in the…?

CALLER: (crosstalk) chance for Iowa, and I hope he wins because —

RUSH: Where is it reflected….?

CALLER: — if he does I think you’re gonna see people rally to him.

RUSH: Where is it reflected in the polling data?

RUSH: He’s probably gonna win Iowa. I would be surprised if Ron Paul wins Iowa, by the way.

CALLER: I think you’re gonna see people break away from this two party madness. That’s how we got in this position, Rush.

RUSH: Well, we’ll see, we’ll see. But you misunderstand where I am in all this. But that’s okay. That’s okay. I am shaken, but not stirred.

Now, that caller also said — and all this is so predictable, it happens every four years. “That two-party system, two party madness, we’re not gonna put up with anymore, Rush, and you’re part of it. You’re part of the two party establishment, we know you.” Let me tell you something. If two party madness is the issue, why did Ron Paul leave the Libertarian party to run as a Republican? Ron Paul’s not running as a third party; he’s not running as a Libertarian; he’s running as a Republican. He’s involved himself in the two-party system. And Ron Paul has led the way with tens of millions of dollars in earmarks. Ron Paul blames America for 9/11. That’s not what the Tea Party thinks. It’s not what conservatives think.

Now, there’s some Tea Party activists that support Ron Paul, but most don’t, as is evidenced by the Gallup polls at 7%. But Ron Paul’s foreign policy, there’s nobody, no other Republican running on that nomination dais up there in any of these debates that has a foreign policy that’s anywhere near Ron Paul’s. Bachmann, Santorum, Gingrich, Romney, none of them blame the United States for Iran nuking up. None of them blame the United States for 9/11. I love the way these Ron Paul supporters try to tell us who is or who isn’t conservative, when Paul is a Libertarian. Ron Paul’s a Libertarian, used to belong to that party but knows he can’t win as a Libertarian so he comes over and joins the Republican Party. He says he could relate to and understand the Occupiers. The Tea Party doesn’t think that.

“Boy, Rush, now you’ve really done it. Now you’ve run around and attacked Ron Paul.” I didn’t attack Ron Paul. I’m simply telling you what is. There’s a big difference here. I was the one who was attacked. My callers are gunning for me today, folks. I am a shaken host here. Not stirred, but shaken. Hanging tough. But none of the GOP, apart from Ron Paul, blames Wall Street for the recession. Ron Paul does. Where is this common ground between Ron Paul and Rick Santorum and Bachmann? Have you seen Santorum’s face when Ron Paul’s describing his foreign policy? Santorum’s waving his arms trying to get in there and respond to it. Who’s next? I can’t believe what Snerdley is finding out there today.