RUSH: Bob in the Bronx. Great to have you on the program, sir. Thank you for waiting and hello.

CALLER: Hi, Rush. A very quick comment before I get to my question —

CALLER: You — I — my feeling is very firmly that you are our William F. Buckley.

CALLER: And you should have a Firing Line show.

RUSH: Well, thank you. There’s no William F. Buckley but him, but I appreciate it. I really do. Thank you very much. 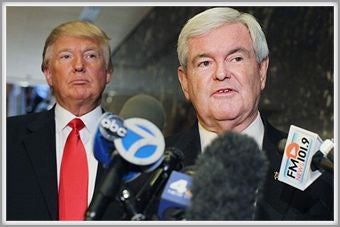 CALLER: Yesterday Newt came to New York to meet with Donald Trump and talk; and I guess Newt said he would be part of his December 27th debate. Now, of course the liberal media is saying what a joke this is, being Trump —

RUSH: — said that the Trump debate is a joke.

CALLER: That’s right, yes. And, well, I was gonna say: They’re saying, “You know, Donald Trump is only a celebrity, has a show on NBC,” blah, blah, blah. But I’ve heard Trump speak on many issues, especially trade, foreign policy, and foreign affairs; and, as a businessman, Trump knows what he’s talking about.

RUSH: You agree more with Trump than you do, say, a Chuck Todd or an Andrea Mitchell?

CALLER: Oh, for sure.

CALLER: For sure — and Trump also knows how critical it is to this nation to get rid of Obama.

RUSH: Do you think Trump knows more about these kind of events than Wolf Blitzer does?

CALLER: I would say so. Yes.

RUSH: Yeah. No doubt about it.

CALLER: Yeah. Anyway, my question to you was, I wanted to know what your opinion of the Trump and Newt meeting is?

RUSH: I don’t know. It’s not just Newt. I mean, every Republican’s gone over there to Trump Tower to kiss the ring. Every one of them has.