Margin Call: A Film You Should See

RUSH: You know, there’s a movie you ought to go see. I like this movie so much I’ve watched it three times.

Margin Call, the movie, is meant to be based on Lehman Brothers. Jeremy Irons plays the head of the firm named John Tuld, the Lehman Brothers guy I think was Richard Fuld, F-u-l-d. To me, it was fascinating. I’ve watched it three times just because it’s good. At any rate, just everything the president said here is a lie. Everything in that sound bite we’ve played is a lie. It was the president’s cronies who took care of themselves in this mess. 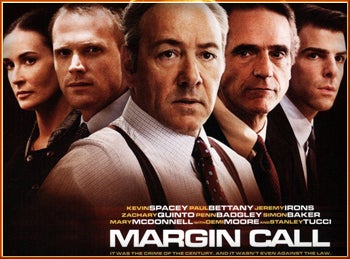 It was the president’s cronies who went to Fed and went to the US Treasury and took money for themselves and bailed themselves out while your home value plummets to underwater status. Obama and his buddies didn’t do anything to protect you, and Obama’s not doing anything to protect you now. All Obama knows is he can’t run on his record, so he’s gotta try to make you think that anybody who opposes him represents the people who destroyed the country.

Well, next time you see Obama speak, you are looking at the guy who is destroying the country.

As much as you might hate me, don’t doubt me.

RUSH: What was that? I have changed my mind about something. I’m gonna tell you a little bit about Margin Call because I just figured out you may not, when you watch this, understand what’s going on. It’s one of the failings of the movie. I only did because my job requires me to spend time understanding this stuff, and the movie is not gonna be on DVD until December 20th so it’s available… I guess you get it from Netflix. I know it’s on iTunes for rent only, you can’t buy it. Ticks me off. I hate having to rent stuff. But I put in my order for the Blu-ray version. At any rate, I’m not gonna tell you how it ends, but it’s based on Lehman Brothers, which was allowed — Lehman Brothers was allowed — to go belly up.

They were the one outfit not bailed out back during 2008, and the whole point in this movie is Lehman Brothers (that’s not the name of the firm in the movie, obviously, but this outfit, based on Lehman Brothers) 93%… No, I take it back. Put it another way. Practically all of the mortgage-backed securities they’ve bought from other people — remember, now, the government made people in the lending industry lend money, mortgages to people that couldn’t pay it back. Those mortgages were worthless from the get-go! You loan money, enough money for a schlub who is either not working or makes 20 grand a year to buy a house, you know you’re not gonna be paid back, but you’re the only one who knows it.

So what do you do? You pack those mortgages.

Fannie Mae, Freddie Mac are supposed to buy them. But Fannie Mae and Freddie Mac are not in the equation here. So what you do is you package these mortgages, you pool them into what’s called a mortgage-backed security (i.e., a stock) and you package ’em together and you sell them to the unsuspecting in your client base. You’re selling worthless stuff. You’re selling to other financial houses, you’re selling to your mother, you’re selling wherever. So this firm, based on Lehman Brothers, is holding losses greater than the value of the company in mortgage-backed securities. They’re holding losses.

If current trends continue at the time, the value of these losses is more than the company is worth. So they have to get rid of them, and the movie is all about what the company does and how it does it in off-loading 93% of their bad mortgages — and the speech that’s given to the brokers on the fateful day by Kevin Spacey, at that point it becomes (well, a little bit earlier) clear, but, again, this movie will illustrate that what was happening from the first stage of making a loan to somebody who couldn’t pay it back, what was happening was: Okay, you package this worthless paper. You sell it to some unsuspecting financial house, client list or whatever. You’re lying to them about, “Yeah, there’s an income stream here, these are mortgages.”

You keep selling worthless paper. The people who buy it, they figure out it’s worthless; they sell it to another unsuspecting group, and that goes on until there’s nobody left to buy it — and that’s what the movie’s about. I still haven’t given you the spoiler alert. Even if you watch this, you will not be able to attack me for telling you how it ends. I haven’t done that. For some reason the movie to me is good. I never heard of this movie until I was just browsing iTunes. I never heard of it, and it was out in October. But I will tell you who got hurt by what Lehman Brothers did. Forget the movie. Lehman Brothers, everybody involved, who was it that was buying these worthless mortgage-backed securities?

It was not the poor; it was not the middle class. It was the clients of Lehman Brothers. It was the rich! A lot of outfits went bankrupt over this. But these financial houses were selling what they knew was worthless because they had been forced to make these loans by government in the first place, and they were selling worthless paper for high prices (until the end when they were taking 63Â¢ on the dollar). But they were triple A rate, they were triple A rated. But the point is that I’m trying to make here that the poor and the middle class… I’m still bouncing off Obama here. Obama with a speech here saying that the poor and the middle class got burned by this.

They didn’t buy the worthless paper. The poor and the middle class didn’t have the money to buy worthless paper. The poor and the middle class didn’t buy mortgage-backed securities. What happens was Fannie Mae buys some of it, Freddie Mac buys some of it, and everybody along the trail got bailed out except Lehman. For some reason. Maybe somebody there didn’t like Fuld, maybe somebody didn’t like his house in the Hamptons, maybe Fuld had thrown a Fourth of July party and they didn’t like Hank Paulson. Who the hell knows how this stuff works in this crowd’s circle. But somebody decided that Lehman Brothers wasn’t gonna get bailed out. Bear Stearns did.

No. No. Bear Stearns does not exist either. But all the others got bailed out that were involved in this. But Lehman didn’t, and my only point to you here is that when you watch this movie if you do you’re going to see that Obama is lying again, it was not the poor and the middle class who were buying this worthless paper. Now, in many ways the poor and the middle class WERE the worthless paper. They were the ones who had been lent money that everybody knew they couldn’t pay back. They’re the ones in houses they couldn’t make payments on, they couldn’t afford upkeep. (sigh) It was such a mess, and it was all brought to us by — I’ll be generous here — a well-intentioned government. It’s just a crock. All this crap Obama’s saying is just a full-fledged crock of crap.

RUSH: I think I’m gonna go home and watch that movie again tonight. I’m gonna just tell you, folks, Lehman Brothers was Goldman Sachs’ number one competitor and Hank Paulson used to run Goldman Sachs, and Goldman Sachs own everything. Paulson was the Treasury secretary during the crash, and Paulson and these guys were the ones that made the decision who would be bailed out and who wasn’t. So one of Goldman’s chief competitors, Lehman, bye-bye. El caputo. Now, if I really wanted to stir things up, if you really want to get the root of the subprime mortgage crisis, if you really want to say who caused the problem, it would be the poor and the middle class. They took the loans.
Do you realize if the poor and the middle class had simply said, “I don’t qualify for this. There’s no way I could pay this money back.” It would have been a very patriotic thing to do. You know, most people, most people — most, not everybody — most people do not incur debt that they know they’ll never be able to repay. Most people who incur debt, you buy a house, you buy a car, you assume that you’re gonna make payments on it. I’m just jabbing you. But I mean if you wanted to go to the very beginning of the problem — of course you know me, I love blaming the poor for everything. There’s a stand alone quote. That’s the media Tweak of the Day.