Rush to Barack: You are the Problem

RUSH: If you were going to give a hate-filled, lie-filled class warfare speech attacking the foundations of the American system — from which, by the way, if you’re Obama, you benefit like few others in history have.

And, by the way, Mr. President, you haven’t contributed a damn thing to this country’s prosperity! You are sure benefiting from it, but you haven’t contributed an iota. It would at least be helpful, Mr. President, if you would get your straw men and your propaganda straight. May I call you “Barack”? You can’t have “rugged individualism” and “socialism.” Let me see if I can explain this, Mr. President, in a way that you can understand. Something cannot be an apple and a walnut at the same time. The point is, you don’t believe in rugged individualism; you believe in massive government! But he said during the speech, “rugged individualism.” He said (paraphrased), “I’m all for it, but that it doesn’t work.”

Look around you, Mr. President. That suit that you’re wearing, the tie, those shoes, the pens that you use to sign all these executive orders, your two Boeing 747s (lavishly furnished), all of those helicopters, the limousines that you drive around in — all of which you use to excess. The fuel that is used by all of these modes of transportation, none of it, sir — none of it! — was produced by your precious government. None of it! You played 88 rounds of golf this year. Those golf clubs, golf balls, golf bags, all the other equipment — the hot dogs you eat at basketball games, the hamburgers when you have your meet-the-common man photo-ops — none of it was produced by the government, Mr. President. And you, sir, are not capable of helping to produce any of it yourself.

You are a sponge.

RUSH: Just got a note, an e-mail: “Rush, doesn’t the White House have a television? Doesn’t Obama follow news? Doesn’t he know what’s happening in Europe? Maybe instead of living so much in the past he ought to catch up on world events. Europe’s fighting a life and death battle with socialism right before our eyes.” Yeah, patently obvious. Europe is about five years ahead of where we’re going and we’re on the same track and we’re on that track purposely. What does that tell you? 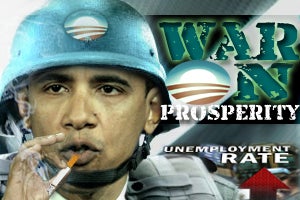 I long ago gave up caring about Obama’s motivation. I know what it is. If you can see disaster straight ahead and you still head for it, you want the disaster. Don’t tell me this guy loves the country, folks. Don’t tell me that. There’s no evidence. Now, Barack, if I may call you that, a free, productive, healthy country is a society of individuals, not a collection of departments or agencies or offices run by know-nothing bureaucrats. A free, productive, healthy country is a society of individuals working in their own self-interest, pursuing dreams, excellence, trying to be the best they can be, using God-given freedom and liberty to pursue happiness as enshrined in our Declaration of Independence. A free, productive, healthy country is not a collection of departments, agencies, offices run by a bunch of bureaucrats, a thousand federal judges, faceless, nameless bureaucrats.
Folks, I don’t know if you know this or not, the House of Representatives is attempting — this is almost indescribable. You’re gonna think I’m loopy. The House of Representatives is trying to pass legislation to limit the laws that can be made by bureaucrats and regulators. The only people who are constitutionally permitted to make law, federal law, are members of the United States Congress. The House of Representatives is alarmed at how much law is being written by bureaucrats in various government agencies. They’re writing legislation trying to limit it and it will not pass. The Congress of the United States is attempting essentially to protect its constitutional role, and it will not survive. It will not pass this round of efforts because the Democrats in the Senate will never go for this. 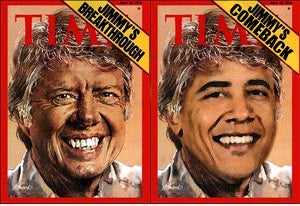 What else in America do you want do to smother and obstruct?

The speech you gave yesterday, sir, was idiotic, shameful, actionable, incoherent, and alien to American ideals and principles. And above all else, it was pure pathetic. But as my cohort here, Mr. Snerdley says, Barack, if I may call you that, you did the nation a great favor. You told every patriotic American loving citizen that your view of America is not shared by them. You finally told us after three years the cat’s out of the bag. After three years everybody now knows why I wanted you to fail. Everybody that heard that speech now knows that you said America as founded has never worked. You have outed yourself, Barack, if I may call you that. You’ve come out. Maybe you’ll be on the cover of the next Advocate, because you just outed yourself, sir. You have nothing but contempt for this country. You told us yesterday you have nothing but contempt for our economic and political system. You told us yesterday.

So now, as my cohort and subservient employee Mr. Snerdley has observed, even the least attentive citizen knows where you stand, even the Kardashians know. And that’s a big achievement, folks. To penetrate the wall of stupidity surrounding that family, even Paris Hilton, even Alec Baldwin is so ticked off he gets thrown off an American Airlines flight, Barack. Thank you. Norman Lear is beside himself. So is Barbra Streisand. You gave it up. There’s nowhere for your supporters to hide. They can’t say you have a vision as a great American. You’re something else. Your vision for this country is not rooted in any, not one, American tradition. Your vision for the future of this country is not rooted in one single aspect of American greatness. That is what you seek to destroy. Even the least attentive citizens, even if they are only half-wits, now know to vote against you. You have hastened my retirement. I’m just kidding, Snerdley.