A Rush-Hosted Debate Would be a Disaster

RUSH: Pierre in Quebec, in Canada, welcome to the EIB Network, sir, hello.

CALLER: You were talking about all that stuff before my question: Can you match a Newt-Trump ticket?

CALLER: One (garbled), one business. 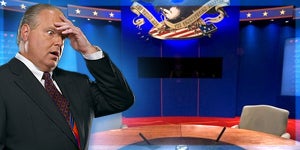 RUSH: Newt-Trump ticket. I don’t… No, I don’t see Trump giving up where he is to go be a candidate. I don’t see him wanting to serve in political office, to be honest with you. I don’t see it.

CALLER: Here’s my main question: You’re used to doing things that are not too easy to do so here’s one for you. Why don’t you host a debate on your network —

CALLER: — and all the candidates split the screen and all —

RUSH: Should I be honest in answering this?

CALLER: — with all the questions posed by 24/7 members.

RUSH: Should I be honest about this?

RUSH: I don’t know. You’re not gonna like my answer. I don’t know that I should answer this question, ’cause you know, Pierre, you’re not the first. You’re the first recently, and I don’t mean to challenge the importance of your call. That’s not what I’m doing. People have asked in previous election, “Why don’t you moderate a debate? Why don’t you have all these candidates on your show and you just pepper ’em with questions,” and (sigh) there’s a reason. (interruption) No, it has nothing… (interruption) No, no, no. (interruption) You guys, you’re… (interruption) No, it’s not that “I’m the show.” I don’t care about that. That’s not it. This is one of those things I really don’t think I ought to answer. I’ll think about it, but I don’t think so.

RUSH: How could any of them look good? It would be a disaster. It would be bad. I shudder to think about it. ‘Cause I’m not running. It would be… There are other reasons, too. I just really don’t think I should say. There are some things you just gotta keep to yourself, and this is one of them.