RUSH: I have put the staff on notice. I’m talking about the three people down here at the Southern Command on the other side of the glass. I am going to go through all of their Twitter accounts, and I am going to see if they have been making fun of me, if they have been consuming adult beverages behind my back, which might explain why they were perfectly fine going three weeks without television service in there. Three weeks! If you were here yesterday, you know this. Three weeks went by, no cable service, no television service, and nobody said a word. 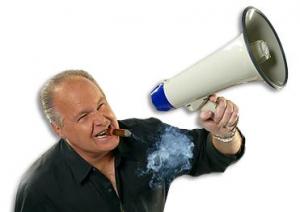 Now, in case you don’t know what I’m talking about, three staffers for Democrat Congressman Rick Larsen, Washington state, had been tweeting for weeks about their own boozing and their own time spent watching YouTube videos and so forth, and they even sent out taunting notes to taxpayers. “Hey, taxpayers, you’re paying us to get drunk and watch YouTube videos. What do you think of that?” The real shock here is that they’re staffers. They are all getting above their stations. That kind of behavior is supposed to be reserved for the actual members of the House, getting drunk and watching YouTube videos on the job. That’s not something the staff is supposed to do. Anyway, these three staffers have been fired, but they also called their boss, Mr. Larson, an idiot and a “Clymer.” C-l-y-m-e-r, George W. Bush’s word for a bodily orifice that’s an exit point.

Anyway, I find it hilarious, these staffers of this guy admit that they’ve been tweeting and drinking and all sorts of stuff on taxpayer time and they send taxpayers notes and taunt them about it. That’s why I’m thinking of investigating all of your Twitter accounts in there. (interruption) Well, you say you don’t tweet but you do something and I might be able to find it.