RUSH: Folks, do you remember the liberal outrage over George W. Bush saying after 9/11, “You’re either with us or you’re against us,” and “We’re gonna get Bin Laden, we’re gonna get Bin Laden dead or alive”? Do you remember how the left had a panic over that, just like they had a panic over Reagan winning the presidency? Panicked over Reagan’s finger poised next to the nuclear button. Well, how about what Obama is doing? “Obama on Thursday forcefully rejected Republican accusations that his foreign policy is timid and amounts to a policy of ‘appeasement.’ ‘Ask Osama bin Laden and the 22 out of 30 top al-Qaida leaders who have been taken off the field whether I engage in appeasement. Or whoever is left out there, ask them about that.'” 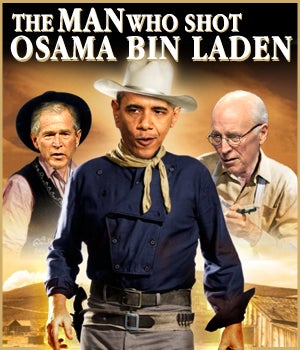 So here’s the president of the United States, “You go ask al-Qaida, you ask Bin Laden, you ask any of these other people I’ve taken out.” Why is nobody disturbed at that lingo? Let’s go to the audio sound bites. Last night on Hardball Chris Matthews spoke with Washington Post columnist Eugene “Sugar” Robinson about Romney saying that Obama had pursued a foreign policy of appeasement. Matthews said, “To have some guy like Mitt Romney, who actually has no military experience in his family, to just come out and take a shot at him like that, and call him Neville Chamberlain with his umbrella, giving away Europe to Hitler. Do you think that Mitt Romney knew what he was saying?”

ROBINSON: There used to be an understanding that we have one foreign policy and you may agree or disagree with what the president is doing, but you don’t come out with something like that. The fact is, though, that as President Obama said, he’s not an appeaser, just, if you look at the record, he’s been more of an assassin.

RUSH: Who ho-ho-ho-ho-ho! Holy smokes! Eugene “Sugar” Robinson says Obama has been an assassin. How’s that gonna go over with the Occupy Wall Street crowd? Did you also notice there that Eugene “Sugar” Robinson said it used to be in the old days we’d have one foreign policy and you may agree or disagree what the president is doing but you don’t come out with something like that. Eugene, what about you guys throughout the Iraq War? Eugene, my man, for the first time in my lifetime — well, second time in my lifetime, you guys in the Democrat Party and the media — but I repeat myself — did your best to sabotage the war in the Iraq, did your best to undermine victory. Talk about politics ending at the water’s edge, you guys broke the mold on how to oppose American foreign policy, and particularly George W. Bush.

And let’s go back. Here’s Calypso Louie Farrakhan. This is May 28th of 2011, Salem United Methodist Church in New York City.

FARRAKHAN: We voted for our brother, Barack — a beautiful human being with a sweet heart — and now (heaving breathing) he’s an assassin. They’ve turned him into them. You didn’t hear me! They turned him.

RUSH: “You didn’t hear me!” So that’s Eugene “Sugar” Robinson calling Obama “an assassin,” and that was Farrakhan back in May 28 saying that they’ve turned Obama into an assassin. Obama’s out there talking about being an assassin after being accused of being an appeaser — and sticking with MSNBC, I guess… Oh, Eugene “Sugar” Robinson’s back. He was on Scarborough today. And they were discussing the primary, Republican primary and Gingrich. Michael Steele, the former chairman Republican National Committee, now a regular on MSNBC (laughing). “So all the stuff we know about Newt and love about Newt in Washington. He’s managed to work through that particularly with the base. Don’t you think that,” Sugar?

ROBINSON: They are nothing but second acts in American lives, I guess, and so maybe Newt has confessed his sins and atoned for them and begun anew. (gasp) Not everybody in the country knows everything about Newt Gingrich. (gasp) There is a target-rich environment there (gasp) for, uh, President Obama and the Democrats to carpet bomb if, in fact, he is the nominee, and — and that’s gonna do some damage.

RUSH: Eugene Robinson, the learned, sophisticated columnist of the Washington Post, describing how Newt’s a sitting duck for our assassin president, Barack Obama.