If We Could Only Get Rid of Withholding…

RUSH: Perry, Birmingham, Alabama, great to have you on the EIB Network and Open Line Friday. Hi.

RUSH: Thank you. What a brutal game last night.

RUSH: Did you watch the game last night?

CALLER: I did. Ben Roethlisberger, man.

RUSH: How about that.

RUSH: How about that. (interruption) No, I was not disappointed not being hit on by the maid. I just wanted to see what would happen. 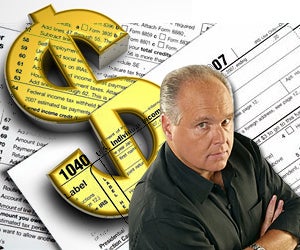 CALLER: Oh. It was a great game.

CALLER: Anyway. A couple days ago you were talking about the payroll tax deductions —

CALLER: — and when I became like an employer and I had to withdraw people’s tax money, whatever —

CALLER: — at first I did it from the (unintelligible) or whatever and then I bought a program. But I was kind of astounded by how many taxes there are, and that as a society we live off of the net pay, we don’t live off of gross pay. And when I tell my friends that 50% of Americans don’t pay federal income tax, they don’t believe me.

RUSH: I know they don’t.

CALLER: And I think that the people that don’t pay federal income tax, they don’t believe it, either, because they have so many taxes taken out, you can’t keep track of it.

RUSH: You know, I think she’s got a great point here. I think there are a lot of people not paying federal income tax that don’t believe it when you tell ’em they aren’t because there are so many other deductions on their paycheck.

CALLER: And the only way that Obama could give a large proportion of tax money back is to tax the payroll tax because everybody pays that.

RUSH: Democrats will also, to counter this argument that 47% of people don’t pay income tax, Democrats say, “What do you mean? The payroll tax is an income tax, don’t give me that crap.” They try to counter the argument that way. She’s got a great point here. That FICA tax, if you want to give across the board tax relief that is apparent to people, you cut that. The problem is you are reducing the funding for Social Security. It’s the only mechanism for it, other than borrowing and printing, of course, but there is no other funding mechanism for Soc. Security. It’s interesting because the people who aren’t paying income tax are the people running around saying that everybody else isn’t paying their fair share. I mean that’s the real irony of this.

In California, the state income tax there, the top 1% pay 50% of California’s state income taxes, and you’ve got people running around that state saying that they’re not paying their fair share. People that are paying nothing in income tax are telling everybody else that they aren’t paying their fair share. And this is what Obama’s encouraging. But here’s Perry, she becomes an employer where she’s required to deduct all of this stuff from her employees, and it’s the first time she became aware of how many taxes there are. And she’s right. Most people have no idea how they’re taxed. That’s why I’ve always been in favor of making people write their tax checks. For six months — wouldn’t even take that long. It would be a revolution. People would know, after property tax, sales tax, if they write the check, pay by their gross, just give ’em the gross but they gotta pay every penny in tax be it check or some physical activity, debit card, but they have to do it and see it deducted from their stash and that’s the way you would stop this and that’s why it will never happen.