RUSH: At a briefing for reporters, David Axelrod was asked about Newt Gingrich, and Axelrod said, quote, “The higher a monkey climbs on the pole, the more you can see his butt.” David Axelrod, chief campaign strategerist for Barack Hussein Obama, mmm, mmm, mmm, asked about Newt. I’m intemperate, folks. I’m the one that’s gonna drive independents racing back to Democrat Party according to the brainiacs in the Republican consultancy corps like Steve Schmidt. I’m the one, I’m intemperate. I’m the guy who hasn’t endorsed anybody. I’m the guy who said, “We have a lot of electable people.” I’m the guy who said, “I’m gonna vote for whoever the nominee is.” Now, I’m called intemperate.

Meanwhile, David Axelrod, asked about Newt, “The higher a monkey climbs on the pole, the more you can see his butt.” 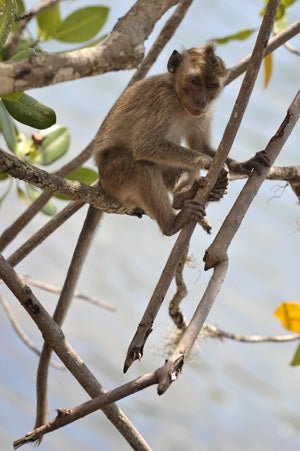 What does that tell you about Axelrod? What in the world is he thinking? Who thinks about monkeys climbing poles? Who thinks about that kind of thing and who thinks about what you see when a monkey climbs a pole? (interruption) No, Snerdley, you want me to go into the racial aspect. I remember Howard Cosell, “Look at that little monkey run,” and they dragged Cosell over the coals for a month. (interruption) I know. That’s the difference. If Steve Schmidt had said this about Obama, what would be happening to Steve Schmidt? He would blame it on me. He would say he heard me say it, he was intemperate, he screwed up, he shouldn’t have said it. He’d blame it on me.

If anybody on the Republican side said that about Obama, it would be over. But, you can say it about Newt. “The higher a monkey climbs on the pole, the more you can see his but.” Yeah, he had a tweak for Romney. “Generally his practice has been to bet other people’s money, not his own.” How do you say that? Other people’s money! A Marxist socialist claims that Romney bets other people’s money.