Obama and the Drone

RUSH: Here’s Mark in Cleveland. Great to have you automate program, sir. Hello.

CALLER: Hey, a couple things real quickly. As I told Snerdley, I am furious about us hanging our laundry out for the world to see. Why did we not go in and get this drone? If John Bolton or someone of his caliber was secretary of state or secretary of defense, do you think he woulda announced it to the world that that thing was in Iranian hands and would you have not thought that we woulda gone in — regardless of the implications — and gotten that thing out of there?

RUSH: Well, that’s… (sigh) My gosh, that’s hard to say. I would have to think that a responsible president — secretary of state, defense, whatever — woulda shot the thing down the moment it became disabled. They would have found a way to self-destruct it, to destroy it, to have it shot down or something. Now, I don’t know if you know this or not, but Obama asked for it back. Obama asked for the Iranians to give it back! He really did, folks. He really did. He asked Mahmoud Ahmadinejad to give it back. (impression) “Will you, uh, give back our drone? It’s our drone! We — we want it back.” Of course the Iranians are now running to FedEx, disassemble it, put it in boxes, gonna ship 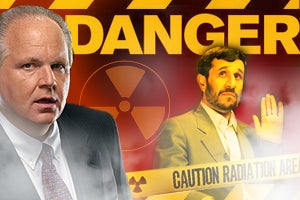 it back, ’cause Obama wants it back. What a putz — an absolute, pure putz.

RUSH: The Iranians are all bent outta shape over the drone ’cause everybody’s saying that they’re gonna have to send it to the ChiComs or the Russians to have it reverse engineered to figure it out. And the Iranians, “We’re smart enough. We can figure it out on our own.” They really are, they’re ticked off. They’re ticked off that media types are saying that they’re not smart enough to figure out the technology inside the drone.

CALLER: Hey, I wanted to thank you for three hours of sanity every day.

RUSH: I appreciate that, sir, you’re more than welcome.

CALLER: I’ve been listening to you since 1993. I’m sorry I’m on a cell phone, but the last four years I’ve been building an airplane, and I finished it this past year. I would spend noon to three every day in my shop working on it, listening to you, and it helped me get through it. Your words of encouragement, the way you talk about people being able to do things that, you know, if they put their mind to it. I’m basically flying EIB 2 now is the way I look at it.

RUSH: What kind of airplane is it?

RUSH: What altitude can you get up to?

RUSH: So you need oxygen.

RUSH: Is it a pressurized cabin?

CALLER: No. No, it’s not pressurized. In fact, I’m sitting on a parachute when I fly ’cause I can go upside down. It’s fully aerobatic.

RUSH: But it’s not an ultralight, it’s a real —

RUSH: Do you have a good flight attendant, DirecTV and all that on it?

CALLER: (laughing) No, I wish. I wish. But one other thing I did over the past four years, too, is I wrote a novel, and I think you would like it. It kind of goes with what’s going on in the world today when you look at this drone and, you know, the fact that Obama doesn’t make military decisions like he did with Osama and those other things. He makes political decisions, and the reason he didn’t blow up that drone and they would have, and I’m sure that they were ready to do it, is ’cause it was a political decision, not a military decision. That thing is gonna come back to bite us in five years because of the fact that they’re going to get that technology.

CALLER: Because he was afraid that if he attacked them, with a cruise missile I mean, you know, we’ve got weapons capabilities that would be able to take that out and they would be tracking it. They know it went down, they know where it went down. And they just decided not to do it. I’m sure the military was screaming, wanting to just blow that thing up.

RUSH: Wait a minute. Wait, wait, wait. If we shoot down our own drone how is that an attack on Iran?

CALLER: Well, because it’s in their airspace, or it’s on their soil. And that’s what they would try and say. I’m sure that’s why he didn’t want to do that, because of that. But I mean that’s just the way this guy operates. From the people I’ve talked to, I’m retired military.

CALLER: And just the way this guy thinks about everything. And you see it now when he talks about getting Bin Laden, when he talks about getting these people with the drones. I mean, you know, he uses everything from the Bush administration with waterboarding or Gitmo and all those things to be able to target these individuals. And obviously he doesn’t give any credit to the past administration.

CALLER: And then when the time comes he’s going to bring it up and say, “Hey, I did all these great things.” It’s pure politics.

RUSH: Yeah, I know he asked for the drone back. But there was also something else that was weird, and when they explained why they — ah, I’m drawing a blank, a mental block on why they let this thing pan out as they did, and it’s silly, along the lines of your political thinking and decision. Anyway, Tim, I appreciate the call. Thanks very much, made my day. That’s rewarding for me to hear.