Republicans Discover Obama Can Be Beaten

RUSH: Here’s Matthew Dowd. Matthew Dowd, campaign strategerist for Bush 43, well known Republican establishment figure, was on Good Morning America today with Stephanopoulos, who said, “Newt gave as good as he got, going straight at Romney’s record at Bain Capital. He was using the same argument Ted Kennedy used to beat Romney in 1994. That same argument Obama would like to use, and Newt’s showing he’ll be ruthless to get the nomination.” 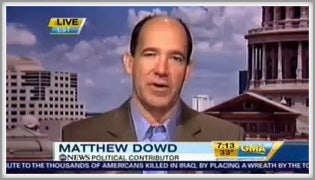 DOWD: This shows (snickers) actually that this is a nomination that everybody in the Republican Party knows is worth having. They know the president is vulnerable. They know that the president can be beat — and now that you have basically two titans going at it — knowing that whoever gets the Republican nomination has a good shot at going to the White House. And so I think that’s what it is.

RUSH: Wow! Wait a minute! Now here’s Republican establishment guy saying that either one of these guys can beat Obama? Brand-new day. Who let this guy off the reservation? This a very revealing sound bite. Establishment Republicans are just figuring out that the Republican nominee could actually win! Don’t forget, and don’t discount me on this. The Republican establishment — and you know who I’m talking about when I say that. It’s made up of inside-the-Beltway conservative (so-called) media people, elected Republicans, campaign consultants, strategists. If you get ’em in a quiet corner of a room and you assure them that what they say won’t go any further, they’ll tell you they don’t think Obama can lose. They’ll tell you that they don’t think we can beat Obama.

They’ve drank the Kool-Aid. They believe this notion Obama’s loved. They believe that Obama’s race makes it impossible to criticize him, campaign against him, impossible to get minority votes. It’s just impossible. They really believe Obama can’t be beat, so the reason for Romney, the reason they like Romney is: A, he’s not a conservative in their mind; and B they think Romney’s erudite, responsible, solid, reasonable, good-looking; and will probably give us the best opportunity of winning the Senate — which is what the Republican establishment’s focused on: Winning the Senate, getting their committee chairmanships back, getting themselves in charge of the money. Now, admittedly, too, there is a strategy here. 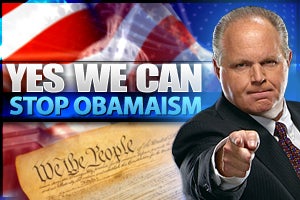 If you get the Senate and the House, then you could effectively block Obama, and they do want to do that. Don’t misunderstand. I’m not saying the Republican establishment wants Obama to succeed. They just don’t think they can beat him. The Republican elite believe the media. They read the New York Times, Washington Post and they believe it — and that’s their trouble in a nutshell. And they also believe that they have to use those two things plus the three networks to get their message out. They think that people like me, I’m not credible except with you red meaters. When the New York Times reports accurately about ’em, I’m telling you, it’s Christmas morning for ’em. They love that. So holding the House and winning the Senate would be a major, major victory.

Now, here’s Dowd. That’s why this sound bite’s something and why I decided to play it. Dowd out there saying either one of these guys can beat Obama? Believe me, that’s news to Republican establishment types.