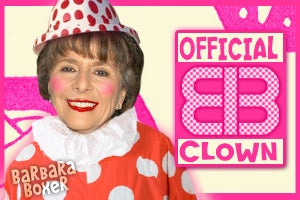 Now, I bring this up ’cause most people look at this, and I do, too, you know, I laugh at it. Hey, Ms. Boxer, how many people have you killed with your abortion legislation? How many people have you killed with your stand on abortion since 1973? How many people, have been deaths, Barbara Boxer, are you personally responsible for? And to sit around here and talk about pollution killing 8,100 people, that Republicans want to kill people. Now, the reason this is important is not for the obvious reason. These are the kind of people, we’re told, that independent voters will skedaddle to and support if our Republican candidates dare get too critical of Barack Obama.

And our own GOP political consultants, folks, tell us, “Don’t be too critical of Obama, don’t go after Obama personally, people feel sorry for Obama,” and Mitt Romney said it yesterday, every election, every presidential election is fought over the 20% undecided, the great moderates, the independents, which is all fine and dandy, but if you don’t first shore up your base, getting 100% of the 20% isn’t gonna help you. And the Republican Party right now and skating on thin ice because what they are attempting to do is secure a nominee for the Republican presidential run who will not have consolidated the base. The Republican Party, it looks to me as though they are actually trying to find a nominee, run a candidacy that is solely, totally built upon independents and moderates of which are 20% of the electorate we’re told.

“If you get too strident, if you get too critical of Obama, well, these independents, they don’t like confrontation! They don’t like bickering. They want everybody to get along and they want this reach-across-the-aisle stuff; if you get too mean to Obama, it’s gonna send people running away,” and where are they gonna go? They’re gonna run to people like Barbara Boxer? They’re gonna run to the Democrat Party, which is the most mean-spirited, extreme, lying bunch of people in a political organization in my lifetime? You know, Barbara Boxer used to be a stockbroker. She’s a former Wall Streeter.

How many people did she kill selling stocks? She used to be a target of the Occupy Wall Street people. Well, she got out of the business before they got in the business. Barbara Boxer’s husband is a slip-and-fall lawyer who represents injured workers in workers’ compensation cases. He’s an ambulance chaser. He’s the kind of guy who needs “movement” so he doesn’t like rising gas prices. He needs car accidents and so forth. So maybe she’s angling for a whopping class-action lawsuit against these murdering polluters, but this is what we’re told: These are the kinds of people the independents are gonna run to.