RUSH: In Wisconsin, you know, there’s a recall effort of the governor, Scott Walker, and this is from the ABC affiliate in Wisconsin: “The signatures of Mickey Mouse and Adolf Hitler will be counted on recall petitions targeting Gov. Scott Walker as long as they are properly dated and include a Wisconsin address, the board charged with reviewing the petitions was told Tuesday.” Now, I wonder what the political makeup of this board might be. In a recall effort, a petition signed by “Adolf Hitler” will be valid; a signature of “Mickey Mouse” will be valid — and this is being allowed! The name of this board is The Government Accountability Board, and all they’re doing here is passing the buck. 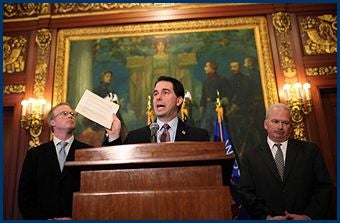 These signatures will be accepted unless they are challenged — which is very handy, of course, since it means all the unions and other Democrats have to do is flood the system with so many phony signatures that there’s neither the time nor manpower to challenge them all. They can’t get legitimate signatures, so they’re gonna be allowed to submit signatures of people who are dead or are cartoon characters as legitimate signatories to a recall petition; and look: This article ends with an ironic line: “The GAB has encouraged anyone who witnesses fraud or other problems related to circulating petitions to contact the board, which is working together with the state Department of Justice to refer cases to district attorneys for possible prosecution.”

Well, why bother with any of that?

If you’re gonna allow Mickey Mouse and Adolf Hitler to sign the petitions, why do you care where there is fraud elsewhere? Don’t forget, they’re far too busy protesting all the “voter suppression” brought about by requiring photo IDs. Oh, yeah! There’s Eric Holder down in Texas giving a speech trying to hold onto and maintain voter fraud by denying photo ID, but do you know who requires photo ID in their elections? Unions. I have it in the Stack of Stuff. The unions require photo ID in their internal elections. So the Democrats are basically telegraphing: They can’t win unless there is vote fraud; they can’t win unless there’s signature fraud. Adolf Hitler! There is no Adolf Hitler in America, but “Adolf Hitler” will be a valid signature on a recall petition to Governor Walker in Wisconsin.