Heritage Chart: Percentage of Poor US Households Which Have Various Amenities

RUSH: I mentioned Robert Rector at Heritage who has made this his year of expertise to study poverty in America and compare it to around the world. I found a great chart here, and we’ve used this chart a couple of times in the Limbaugh Letter, the most widely read political newsletter in the country. I’m gonna send this chart up to Koko, and I told him I’m gonna be discussing this and to put it up.

“Percentage of poor US how does which have various amenities: Refrigerator, 99%. Television, 97%. Stove and oven, 97%. Microwave, 82%.” The list goes on. That’s what it looks like. It’s a chart. So Koko will put it up and you’ll have a chance to take a look at it, ’cause I had the call and guy made a great point. More and more people are told — more and more middle-class people are told — they are living in poverty, and furthermore they’re told that the rich are the reason; the rich are responsible. That’s how Obama is running a scorched earth. That’s how he’s gonna divide and rip this country apart as part of his reelection campaign. 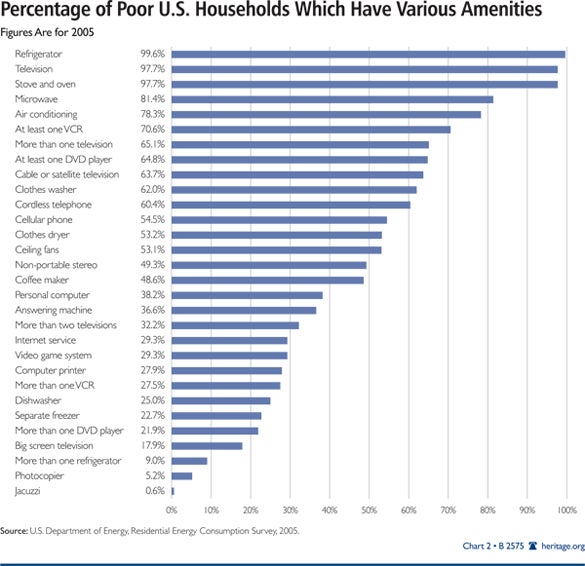