RUSH: I can’t tell you the number of e-mails I got from people just as disappointed as they can be that Nikki Haley has endorsed Romney. Now, the reason people are disappointed is because she’s a Tea Party governor. The Tea Party got Nikki Haley nominated and elected. (interruption) What? What are you shaking your head negative in there for? This is the point. Well, all these governors and all these people in the party are looking at the veep possibility. That’s number one. Number two, folks, the Tea Party is going to have to eventually take over the Republican Party. Right now the Republican Party establishment (which, of course, says it doesn’t exist) has certain rules and requirements if you want to advance in the Republican Party. 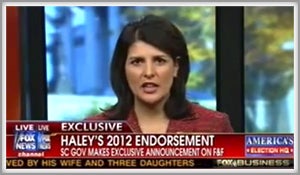 And one of them is, “When the establishment of the GOP has picked their candidate,” and they have,; it’s Romney, “and if you’re Republican governor and you want to go places in the party, you better get on board with the party’s choice.” She really… Don’t misunderstand this. Of course she has a choice, but she really doesn’t have a choice, given her aspirations. It just means that we’ve got a lot of work to do. As long as we’re caught up — and we really have no choice because we’re so overwhelmed. As long as we’re caught up in trying to stop Obama and stop the Democrats, we’re not advancing anything. This a major, major point. I’ve been thinking about this. You know, ’cause I swerved into a profundity last week that nobody ever won anything defending it.

You have to be advancing — and when you’re defending, basically what are you doing? You’re trying to stop something. By definition when you’re trying to stop something, you’re not doing a U-turn. You just got… You know, you’re holding your hand up there and saying, “Thwart!” or whatever, “Stop!” and we’ve gotta do the U-turn. In addition to stopping we’ve gotta start pushing back and from our perspective start moving forward, and the Nikki Haley situation is a realization or illustration of this. You know, she wants to be veep, maybe. I don’t know. She wants higher office in the Republican Party. The Republican Party is still run by the Republican Party establishment, even though they deny their existence. It is.

I hope Governor Christie doesn’t get mad and call me again over this but it’s the same thing. It’s why he’s endorsing Romney. That’s the party’s choice and if you’re gonna be in the party, it’s just like I told you. When you are newly elected to Congress when you’re freshman, Republican or Democrat, the leadership brings you in and they tell you, “Okay, here’s the lay of the land. You want to go places here? You want to someday be a chairman of a committee? You want to have help with your reelection? Fine. You’ll vote the way we ask you to when we ask you to. If you want to be a maverick and a rogue and go off on your own, you’re more than welcome to do that but we’re not gonna send any Dole pineapple money you’re way when you’re in New York.

RUSH: It’s Chris, Greenville, South Carolina. Great to have you, sir, on the program. Hi.

CALLER: Oh, good afternoon, Mr. Limbaugh. How are you?

CALLER: One, I’d like to officially raise your percentages of being right to well past 99.6.

RUSH: Thank you very much. I may have to send you out to Sullivan Group. I’m having to file an appeal with those people.

CALLER: Well, I listen to you all the time and I enjoy your show. As a matter of fact my wife who’s not as politically involved as I am just thinks you’ve got a great sense of humor.

CALLER: So we enjoy you very much.

CALLER: (laughing) Yes, she is as a matter of fact. But I was listening to your program at your open and you made some statements about Nikki Haley just recently endorsing Mitt Romney.

RUSH: In fact, I want to play the sound bite. We’ve got it here, Mike. This will not take away from your valuable time —

RUSH: — as a caller, Chris. This is Nikki Haley. This is this morning on Fox & Friends.

HALEY: What I want is someone who is not part of the chaos that is Washington. What I wanted was someone who knew what it was like to turn broken companies around, someone who had proven results by improving a failed Olympics that ended up being a great success story, and someone that knows what it’s like to make a decision and lead, not just make a vote. And Mitt Romney is that person, and I think now more than ever we need someone who has the leadership to deal with a broken Washington in a way that we can get things done, and as governor of Massachusetts, you know, what we saw is he balanced his budget and he cut taxes 19 times with an 85%-controlled Democrat legislature. That says a lot and that’s something that we need from a good conservative governor at this time.

CALLER: Well, I’ll have to say if there’s something broken I believe right now it might be the Haley administration here in South Carolina. She garnered a great deal of support from the Tea Party people here in the state.

RUSH: Hey, Chris, would you do me a favor?

RUSH: If you’re not, would you move the phone microphone closer to your mouth.

RUSH: Thaaaaat’s much better. Thank you.

CALLER: (laughing) Well, no, I don’t think it could ever be you, Rush. (laughing)

CALLER: I’ve grown somewhat disappointed in her administration in some of the things that — some of the actions she’s taken, and I feel you’re right. I have to give you that all the time. You’re 98% of the time correct in your statements; and if anything’s happened here, I believe the Republican establishment has co-opted Ms. Haley, our governor. I do not see her actions as being —

CALLER: — what I thought they would be when I cast my vote for her.

RUSH: Is this not the first thing she’s done that’s disappointed you as governor?

CALLER: No, it’s not. No. We. She early on passed legislation having to do with illegal aliens here in the state, but I downloaded the entire legislation and then read it thoroughly, and it really does nothing about the illegals in our state. I was disappointed with that.

RUSH: Well, let me tell you: Did she run as a Republican or was she on the ticket as a Tea Party candidate?

CALLER: She ran as a Republican.

RUSH: All right. I’ll tell you, this is key — and I’m not trying to do anything here other than explain the business side of this and give you an illustration (which you know) of what the task at hand is. She ran as a Republican. There’s no question, the Tea Party was instrumental, and she sought their help. She cultivated their support. She unquestionably took their financial contributions and support. But the election’s over, she won as a Republican. She has, obviously, perspirations to advance higher in the Republican Party. Now, next time you hear anybody tell you there isn’t a Republican establishment, just look at this instance here with Nikki Haley if she wants to be vice president.

If she wants to be in somebody’s cabinet someday — a Republican — she’s going to have to do what the Republicans want her to do. If you are a mid-level sales manager for the XYZ Widget Company and you want to someday be in the executive suite, you are damn well going to do what the XYZ executive suite people tell you to do. (interruption) But no, but no. (interruption) Snerdley says I didn’t, but I created my own executive suite, see? I did not try to take over anybody else’s. That’s not realistic. We’re not gonna create a new party. We don’t even want to try to do that. That’s wilderness time. The Republican Party is something that’s gonna have to fought for and taken over by the Tea Party. It’s gonna be an active political objective and process.

I don’t mean bloody. It’s just gonna have to be something that happens within the realm of politics. Folks, I’m not defending her by any stretch. I’m just trying to explain for those of you who think that she’s been disloyal. She’s a Republican and she’s chosen a path that many of them choose. When it comes time for reelection — if one of these Republicans is elected president, and if she is not chosen to be veep and if she’s not chosen to be in the cabinet, if she remains governor, when she runs for reelection — she’s gonna redo this and retrace her steps. She’ll go back out to the Tea Party again, it will happen all over. It will. She knows how she won. She knows what it took for her to win. I’m probably thinking that she doesn’t even think that this is a betrayal because she thinks the Tea Party and the Republican Party are closely aligned and…

Well, yeah, Christine O’Donnell, too, and Christine O’Donnell needs a job, and she has learned. (laughing) If she’s gonna go anywhere in the Republican Party, she’s gonna have to get Karl Rove and Mike Murphy on her side. She can’t go anywhere if they’re opposed to her. It is what it is. (interruption) No, no. I’m not saying sit here and take it. I’m just saying it illustrates the task at hand. Yeah, it’s moderate tyranny. Christine O’Donnell and a little moderated tyranny, not full-fledged tyranny. Democrats do that. Folks, look, for some reason here — maybe it’s ’cause I had, what, 45 minutes sleep, whatever — I am in a good mood. I felt good after the debate and I’m not gonna let anybody. I’m not gonna let anybody sour my mood today, certainly not Nikki Haley. But if you’re suspend and if you’re feeling betrayed, I hear you. I understand totally. It’s because I do understand it that I’m not so much bothered by it. I mean, not to the point of feeling abandoned.

You know, I don’t have abandonment issues. In fact, when people leave me alone I actually celebrate.

RUSH: Something very important to remember here, ladies and gentlemen: The Tea Party isn’t a party yet. The Tea Party doesn’t have a convention, doesn’t have a leader. The Tea Party is in no position to hand out favors. The Tea Party cannot hand out patronage yet. I mean, that’s a huge disadvantage compared to the GOP elite, the GOP establishment. They don’t have any patronage. There’s nothing that they can offer in the traditional political sense. Now, our caller from South Carolina said that Nikki Haley disappointed him because of something she’s doing on illegal immigration. Well, last I looked Eric Holder is suing South Carolina because of its stand on illegal immigration. So if the attorney general, if Obama’s attorney general, is suing her, then I have to think that she’s doing something right.

The caller specifically mentioned being let down by Nikki Haley’s immigration law, but yet Eric “Fast and Furious” Holder is out there suing her. So I don’t know that it’s necessarily bad.