RUSH: Well, I knew that this was coming, but I would have never guessed where it’s coming from. … I’m not disappointed that it’s coming from where it’s coming from. I’m just a little surprised. I knew it was coming. Jealousy of Tim Tebow has surfaced in the National Football League. Brian, you’re a big football aficionado. Tell me which quarterback has just expressed frustration and jealousy. You don’t know yet, do you? So take a wild guess. Which quarterback has expressed frustration and jealousy over the coverage that Tebow is getting? (interruption) No. Not Aaron Rodgers. Not Tony Romo. (Don’t worry, Snerdley.) Joe Flacco of the Baltimore Ravens — and, frankly, as a Steelers fan, this is not disappointing to me. 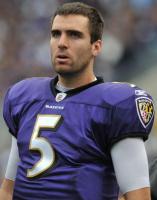 “Flacco believes the Ravens are ‘disrespected’ by the national media. ‘The bottom line is we don’t need a lot of help because we have a great fan base every week and we win football games,’ Flacco said,” and we’re sick and tired of seeing Tebow everywhere! He didn’t say that, but it’s implied here. “‘We’re not a losing football team that needs to be out there in the media and be talked up like we are all-world. We are.'” This… (snorts) I am stunned. I am stunned. I can’t think of the last time something like this has happened. Look, I know these guys feel this stuff. I know in the privacy of the locker room and at home they’re saying, “Tebow? For crying out loud, he’s a rookie! Look at what I’m doing. I’m lighting it up! Why ain’t I getting coverage?” but you never go public and whine about it.

PERRY: I’m getting to where I like these debates. As a matter of fact, I hope Obama and I debate a lot — and I’ll get there early, and we will get it on and we will talk about our differences, which are great. There are a lot of folks that said Tim Tebow, uh, wasn’t gonna be, uh, a very good NFL quarterback. There are people that stood up and said, “Well, he doesn’t have the right flowing mechanisms,” or, “He doesn’t… You know, he’s not playing the game right,” and, you know, he — two national championships. That looked pretty good. We were the national champions in job creation back in Texas but I’m all ready for the next level. Let me tell you, I hope that I am the Tim Tebow of the Iowa Caucuses.

He has a great smile. In fact, there was one time the camera caught him frowning last night, and it was the first time I’ve really ever seen him frown. I’m sure that he frowns more than I’ve seen and the camera hasn’t been on him when he’s do, but it stood out because he was frowning. I don’t remember what the question was, but normally he’s got this big wide grin, and looks like even when he gets tongue-tied he’s having a great time up there. But he didn’t get tongue-tied. Here’s Rick Perry on Fast and Furious. Audio sound bite number eight. The question was from Megyn Kelly: “Are you and other Republicans ‘politicizing’ the issue as Attorney General Holder claims?”

PERRY: If I’m the president of the United States, and I find out that there is an operation like Fast and Furious and my attorney general didn’t know about it, I would have him resign immediately. The president of the United States comes to El Paso, Texas, yearly this year and proclaims that the border of Texas and Mexico — the US border with Mexico — is safer than it’s ever been. Well, let me tell you: I’ve been dealing with this issue for 11 years. I’ve sent Texas Ranger recon teams there. Our law enforcement men and women face fire from across the border or in the US side from these drug cartels. It is not safe there. Our country is in jeopardy.

RUSH: Yep. He was on last night. He was really on. Santorum came back on , “I wouldn’t wait for my attorney general to resign. If I find out he knew about Fast and Furious, I’d fire him,” which was good because Holder’s excuse is, “I didn’t know.” Wa…? You’re attorney general, you run the Justice Department, that’s what the ATF is. What do you mean you didn’t know? So I mean these guys, these guys were on.