RUSH: Ed in Philadelphia. Hello, sir. Great to have you on the EIB Network.

CALLER: Hey, Rush, Merry Christmas to you and your family.

RUSH: Last Friday. That means you got it in two days.

CALLER: Less than two days. I ordered it Wednesday afternoon —

RUSH: You know, we heard about this. We got a lot of people — pardon me for a moment here, folks — we had a lot of people saying they got it that quickly, and I had to call the fulfillment company, “Are you people sending this stuff out express?” You know, make sure to protect the profit margin. Found out they weren’t.

RUSH: It was just going normal, standard shipping, and it got delivered. That’s fabulous. I’m glad to hear that.

CALLER: Rush, it’s outstanding, like everything else that you are affiliated with. I told Mr. Snerdley I just wanted to inform your audience and you, my significant other, who’s name coincidentally is also Kathryn, suffers from non-Hodgkin’s lymphoma.

CALLER: And last year, after the radiothon, couple of weeks after when I received my swag in the mail.

CALLER: She happened to be at my house, and she was told that very day as a matter of fact that the hospital was gonna cut off her treatment because she, you know, hasn’t been able to keep up with her payment for her copays and stuff like that. So I said to her, “Why don’t you just contact the Leukemia & Lymphoma Society?” Well, Rush, to make a long story short, she did that, and inside of seven working days Leukemia & Lymphoma Society sent check for $5,000 to hospital; covered 85% of the money that she owed.

CALLER: And she was able to continue treatment.

RUSH: That is fabulous.

CALLER: And that was not using anybody’s name or anything like that, just the idea that you would just fill out some forms, fax from a doctor to the LLS and she was able to continue her treatments with a little added money from —

RUSH: I tell you, they’re a great, great, great bunch of people. They’ve all personally, everybody in that organization, at least the ones I know and work with have all been personally touched by leukemia, lymphoma, to one degree or another, and that’s why they do what they do. So, it’s a great story. I’m not surprised at all.

RUSH: Don’t even want to think about it, do you?

CALLER: Well, I know what would have happened to her if we were under Obamacare already.

RUSH: Don’t want to think about it.

RUSH: Well, I’ll tell you what, that’s a fabulous story, and I’m glad you got through and were able to share that with us, particularly at this time of year.

CALLER: That’s why I called because I don’t hear that much about it beyond the, you know, radiothon, which is a great thing in and of itself because my mother 30 years ago passed away from acute myelogenous leukemia and they have come so far in treatment and advancements and stuff like that that it just astounds me and —

RUSH: You know what is amazing, if I may observe, what’s amazing is that $5,000 was able to continue the treatment and that for some reason you were shut out over that amount. I thought it required a lot more nonpayment before you got shut out.

CALLER: It was $7,200 or something like that. The LLS, that’s their maximum donation that they can make, you know, so that they can help the most amount of people, they send $5,000 and —

RUSH: Well, God bless you. City of Brotherly Love, though, you’re from Philadelphia.

RUSH: Nick’s Roast Beef. Ho. Ho. I love — (interruption) No, it’s not with Swiss cheese. No, no, no, no, John Kerry might order Swiss cheese there but, no, it’s not Swiss cheese. Ed, thanks so much, and Merry Christmas to you. Congratulations. That’s a fabulous story. Ed, are you still there?

RUSH: Ed, it’s Christmastime, and I’ve got this incredible prize closet here. I want to send you a Rush engraved iPad.

RUSH: I really do.

CALLER: — that would be so awesome.

RUSH: Your ships come in and you were not at the airport, you were at the dock.

CALLER: I want to tell you something about the Rush logo. You, when you started your Facebook page?

CALLER: I refused to join Facebook, but my children begged me to do it, and when you were giving away iPads with the EIB logo I joined Facebook.

RUSH: Well, and you didn’t get one obviously, otherwise you would have told me.

CALLER: I did not get one.

RUSH: You got one now. So hang on. I didn’t join Facebook until I joined, either. 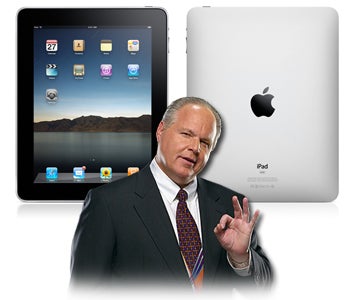 RUSH: (laughing) I didn’t join Facebook ’til I joined. At any rate, you sit tight, Snerdley will get the address we need to send you the Rush EIB signature engraved iPad.

CALLER: I’ve been listening to you for as long as I can remember. I started listening to you with my dad. He’s 80 now and probably listening as we speak. And I’ve watched him nod to the radio in agreement, and sometimes he’d just laugh hysterically, and I remember thinking, “Who was this guy on the radio that makes my dad react this way,” ’cause he’s a man of few words, he’s not too impressed by too many people. My parents were Reagan Democrats, and due to his presidency and you they never looked back. I’ve got two daughters, they’re nine and 12, and they listen to me and watch me while I listen to you and it’s kind of keeping the family tradition alive.

CALLER: Thanks to your insight and their wisdom, they’re learning to question what they’re being told and taught in school and seek the truth. I worry about their future like any parent would, but I think they’re gonna be okay in the end if they keep learning the truth from guys like you and others out there.

CALLER: You know, I don’t want them to grow up angry libs like you had in a previous caller. But listen, Rush, this isn’t really why I called. I was sitting here wrapping up some last-minute gifts and I heard you on the radio, it’s kind of like an old friend when you come on, comes over to visit, I thought you’d be on vacation this week.

CALLER: But I’m glad you’re out here, and I just wanted to tell you something, and I mean this, I wanted to thank you for everything you’ve done for guys like me and all of us out here. I don’t think you hear it enough, and what you’ve done for your country, what you do for our troops and countless others, we never hear about. You know, it means a lot to us, and I wanted to wish Merry Christmas to you, your family, and your staff, and we love you out here, we really do, we’re grateful for what you do and that’s really all I want to tell you.

RUSH: I really appreciate that.

CALLER: I really want to thank you, Rush.

RUSH: I love all of you out there, too, more than you can ever know, more than I can ever express. I really appreciate that, that’s nice of you to say, and I can’t tell you how moved I am. It still embarrasses me to hear this ’cause I’m just a guy on the radio here, but I truly do appreciate it. And I thank you from the bottom of my heart. No, I’m just a guy on the radio. But I appreciate it, I really do. Anyway, anyway Ron thanks so much, I appreciate it. Best of luck to you. (interruption) I haven’t thought about that. Snerdley’s doing a “It’s a Wonderful Life” trip on me here, what the country would be like if I weren’t on the radio, but I am on the radio and there’s no Clarence up there that needs to save me from that thought. At any rate, Ron, I can’t thank you enough. I really appreciate it, as I say, more than I have the ability to express.