RUSH: House Speaker John Boehner yesterday — and he had a press conference today, a very short one but he made the same point. He “rejected a Senate plan to extend the payroll tax cut for two months, thwarting a deal cut by the White House and Senate Republicans that would prevent taxes from rising on middle-class workers in the new year. Boehner, R-Ohio, said the Senate plan to extend the payroll tax cut for only two months is ‘just kicking the can down the road’ and called on Congress to come up with a bill that extended” the tax cut all the way through 2012. 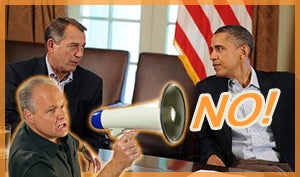 Now, apparently, there was a deal here between Obama and Senate Republicans, and Boehner has thwarted it. Everybody wanted to kick the can down the road for just two months and bring the issue back up and allow Obama to bring the issue back up as a campaign issue again next year in an official campaign year. (interruption) Do I think it’s true that Boehner agreed to what? Oh. Well, I don’t know what happened. The White House is saying that Boehner agreed to this and turned his back on it. Frankly, I was tuned out all weekend. I really wasn’t paying attention. It was Kathryn’s birthday over the weekend, those are also multiple day events and I didn’t pay any attention to this over the weekend. I frankly didn’t. Folks, even I need time out from this stuff. Even I do.

“As the Senate prepared to vote for the bill calling for a two-month extension, the White House ‘understood that Boehner signed off on the bill.’ … Boehner spokesman Brendan Buck said the speaker never approved the Senate bill.” that he never went along with this, that the house was never gonna go along for kicking it down the road for just two months. Anyway, it is what it is. You know, whether White House is right that Boehner changed his mind on this or not, the fact is Boehner’s hanging tough on this and saying, (paraphrasing) “Look, the president said we all need to stay here, the Democrats, we all need to stay here and finish our work before we go on vacation, and that’s what House Republicans are — ” He kept saying we agree with the president. Let’s see what Boehner had to say. This is on Sunday morning is on Meet the Press, David Gregory talked to Boehner, they’re having this discussion about the payroll tax cut debate and Gregory says, “So what’s gonna happen?” 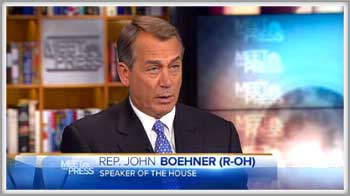 BOEHNER: I and our members oppose the Senate bill. It’s only for two months. You know, the president said we shouldn’t go on vacation until we get our work done. And, frankly, House Republicans agree. We passed a one-year extension of the payroll tax credit, unemployment insurance with reforms, making sure that those doctors who treat Medicare patients are not going to see their reimbursements cut. We had a reasonable, responsible bill that we sent over to the Senate. And, you know, if you talk to employers, they talk about the uncertainty. How can you do tax policy for two months?

RUSH: Yeah. Understand that. And the same show, Gregory said, “Do you trust President Obama as a partner in this?”

BOEHNER: We’ve had very good discussions. I do trust him. We have a tough time coming to an agreement. But the president and I have a very cordial relationship. I hope it will continue.

RUSH: Would you ever hear Nancy Pelosi say she trusted George W. Bush? I don’t know whether Boehner really trusts Obama or whether he thinks it’s politic to say so. Probably the latter. My guess is that our consultants are all over our guys, our pollsters are all over our guys. We know that the rule of thumb coming out of Republican Party, “Don’t criticize Obama, he’s personally popular, people even feel sorry for him, don’t be critical of the president.” Oh, yeah, we trust the president, very cordial relationship with the president. Here’s Boehner this morning on Capitol Hill. He had a press conference and during the Q&A, reporter said, “Now, we were told that you initially supported the Senate payroll tax cut bill, this two month thing, said that the House should move forward with the Senate.”

BOEHNER: No, that’s not — that’s not true. What I was outlining was the fact that having the Keystone pipeline in here was a success, but I raised concerns about the two month process from the moment that I heard about it.

I think the thinking in the Senate Republican side — correct me if I’m wrong here — the thinking on the Senate Republican side is that just a two-month extension puts more pressure on Obama next year to it be to sign off to the Keystone pipeline, that this two month thing does not give anybody enough time to adequately review it and approve it, so this is two months more that he’s got to delay it, but the thinking is that when the time is up he’s gonna have to approve it because it’s gonna be too big a lightning rod issue affecting his campaign. Everybody’s gonna know by then all the jobs that are not gonna be created if he vetoes this thing, that all of the expansion, the increased amount of energy that we will have ourselves — we have 625,000 miles of pipeline in this country. You know how many miles it is around the earth?

How many miles around the earth is it, Snerdley? There are 625,000 miles of pipeline in the United States. That’s enough to circle the earth 25 times. And Obama is running around saying this pipeline is too dangerous, this pipeline is too risky, we have 625,000 miles of pipeline in this country. They were built when America was winning the future. Now, instead of winning the future, we resist it and we blame the limp economy on everybody but Obama. But I know that somewhere the thinking is that there’s gonna be more pressure on Obama to okay the pipeline next year in an actual election year. People still don’t understand what he’s doing with this. The reason he wants to put this off, he wants money coming in on both sides. He wants both donors contributing money to him. The minute he makes a decision either way on this, half of the money coming in dries up.

RUSH: To answer the question, the circumference of the earth at the equator is about 25,000 miles, to be exact 24,901.5 miles. So 25,000 miles around the earth. We have 625,000 miles of pipeline in this country. Everything’s cool, everything’s fine, and we built that amount of pipeline when America was growing, in the midst of growth and promise. 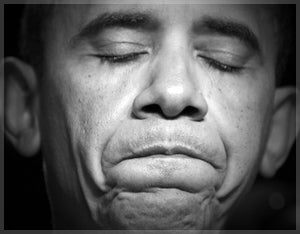 SCHUMER: On Friday Speaker Boehner said, “I can get this passed. All you have to do is put the Keystone pipeline in.” Guess what? We swallowed hard and we did. Trying to negotiate with Speaker Boehner is like trying to nail Jell-O to the wall. He keeps moving the goal post back because he can’t control his caucus. And they’re sort of running off a cliff, and he’s following.