CALLER: Hi, Rush, how are you today?

CALLER: Glad to hear it. We have a beautiful Oregon day here. You know, I wanted to call, Rush, I mean virtually zero disrespect to our military in saying this comment here, but with what’s happening here with this bill suggesting that employers are gonna get benefit by virtue of hiring an individual who’s coming out of the war. Rush, I’m part of the long-term unemployed, and it feels a bit that this just kind of punched me right in the gut, if you will, as far as to compete with. 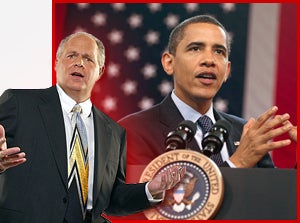 RUSH: Yeah, I know, this is very tough for you to say. You’re asking, why in the world, why in the world does a business get a tax break or any kind of a break for hiring any specific citizen? I know you’re not harping on the military here.

RUSH: It’s kind of like the “baby on board” signs, we’re supposed to be more careful driving behind a car ’cause there might be a baby in it. Why is the baby more valuable than the driver? Well, the baby is judged to be more innocent is why it tugs at your heartstrings. In this case Obama is simply trying to build chops with the military. It’s a weakness that he has and the whole Democrat Party has. So it’s not even about veterans, it’s not even about the military. That comment, that program is aimed at votes. He’s trying to tug at the heartstrings of people who hopefully will be sorry that people were sent off to war, terrible sacrifice, the least we can do is give them preference in hiring when they come home. He’s hoping that scores votes for him. I know you don’t mean to rip the military on this.

RUSH: No, I know. I know. You’re just wondering how come they can’t get a break for hiring you. You’re long-term unemployed, you’re an American, you need a job.

CALLER: All is true what you just said, absolutely.

RUSH: This is why liberals should be shunned. There’s no reason the government needs to be picking winners and losers. This is all about what the private sector is all about. It’s no different than Obama telling small business, “Hey, buds, you go out and hire somebody, we’ll give you a $2,500 tax credit, anybody.” He tried that. That didn’t work, by the way. Because it’s a lousy deal. You go out and spend 50, $70,000 hiring somebody and the government gives you $2,500 back, big whoop, when you don’t need any work done because the economy’s in bad shape. That didn’t work so Obama is going a step further, “Okay, hire a vet, nobody opposes that.” Look at you, you’re nervous here calling and even saying what you’re saying about it. So, yeah, hire a vet and then get a break and he’s trying to transfer the onus on this to small business.

And then if they don’t hire anybody, and if they don’t hire any vets, Obama can, if he wants to, later on say, “Hey, I tried, but you see why we can’t leave it up to the private sector. They don’t care about veterans. I gave ’em an opportunity, big tax break to hire veterans. Did they do it? No. That’s why we have to control this. That’s why we have to be in charge.” It’s all a setup. In a situation like this, this picking winners and losers. And it’s been proven that that’s not fair. And I know what you’re gonna say, “What about home mortgage deduction interest?” Yeah. Well, well, that’s a whole different — the reason Lehman Brothers went under is because they needed make a movie about it and that was called Margin Call. Have you rented that might have yet?

Well, it comes out on DVD and Blu-ray tomorrow for sale. You can download it from iTunes, Netflix, anyplace that streams now. Lehman Brothers — I could only guess but my guess is nobody liked the CEO. My guess is that Paulson and the guys hated Richard Fuld. They thought he was a creep, an SOB, needed a come upping. Who knows. Who knows. (interruption) No, I’m not saying I’m against veterans being hired. The whole notion that the government, a central planner can go out and dictate who gets hired for his own benefit, not theirs — understand, this is not to benefit the military. This is to make Obama sound like he cares.

You know, all these stories about promise kept, Iraq timeline, the Bush promise was kept. Obama didn’t do diddly-squat but follow the Bush withdrawal timeline in pulling troops out of Iraq, December 2011, way back, years ago, original plan, Bush administration, bring the troops out of Iraq. When you hear Obama talk about it, do you hear Bush’s name mentioned at all? No. It’s all about Obama currying favor with voting blocs. Everything’s about his reelection, pure and simple. Nothing is about what it seems to be about.