RUSH: It’s this simple, ladies and gentlemen. I don’t care what you hear from now until Election Day, I don’t care what kind of BS that you hear, I would rather be us than them. There is simply no way to defend Obama’s record. There’s no way to run on that record. There’s no way that Obama can run around and say, “four more years.” There is no way Obama can positively say, “You’re better off now than when I assumed office,” there’s nothing positive. In fact, they’re gonna be heading for this unemployment number, 8% — since when is that tolerable? That’s even being set up. That’s why all this talk this past year about 9% whatever being the new norm. “Oh, yeah, well, you know, Rush, globalization and the way the economies of the world are shaking out and that’s something the American people I think need to prepare themselves for, adjust themselves psychologically, economically nine, 9%, nine and a half percent, pretty much gonna be the new norm.” It’s what they’ve said. They’ve been conditioned.

So 8% is supposed to look good. Full employment. Remember, in 2007 we’re at 4.7% unemployment. George W. Bush, 2006 for sure, 2007, maybe it got up to five-something. But 8%, since when that is tolerable? The battle, ladies and gentlemen, will be whether Obama is able to change the subject from his presidency and his record to something else. He is gonna try, they’re already doing that. They’re already trying. The question is the battle will be whether he’s able to get away with it. We know he’ll be able to get away with it in the media.

I saw Governor Christie. He was on Scarborough’s show today, and he was explaining why he’s not in favor of Newt Gingrich getting the nomination. He said, (paraphrasing) “Well, you know, I like Newt, he’s a good guy, but I’m just afraid that if Newt is the nominee, then Newt will become the subject of the campaign, and we need Obama to be the subject of the campaign.” Governor Christie, I have to tell you, it doesn’t matter who our nominee is, they are going to be the subject of the campaign. If you think, if anybody thinks that Romney is going to be treated with kid gloves… what do you think Occupy Wall Street was put together for? To nail Romney. I mean the idea that we could pick a name that they’re gonna leave alone, that’s not correct. So whether it’s Newt, it’s Bachmann, Perry, Santorum, Romney, the subject is going to be that person. That’s what the campaign’s gonna be about. The media will see to it.

Our battle is gonna make sure they’re not able to change that subject, that it remains a referendum on Obama. Because the party with the weakest candidate is the party with Obama at the head of it. That’s the party with the weakest candidate because it is Barack Obama who is the weakest candidate out there. What do the Democrats have to do? They’ve got a monumental charge here. They have to defend a large majority of the Senate seats that are up, plus Obama, they have to defend Obama. And what have they done? They have no budget. They have not done one thing towards deficit reduction. Despite what they say they have not done one thing toward job creation. Exactly the opposite, in fact. They have blown up the deficit. They have blown up the debt. They have lost two million plus jobs, just erased. And the nation’s being pushed into a downward spiral, and they proudly claim that they are managing the decline. They have nothing positive to say about themselves or anybody else. They’re defeatists, they’re losers, we just have to keep them in that corner.

RUSH: I referenced this earlier in the program. This is Governor Christie. He is on Scarborough’s show on PMSNBC today, and he’s talking to Mika Brzezinski. He told Mika he is very disappointed in her, that she used to be down the middle of the road, but now she’s gone full tilt leftist and he’s disappointed. The guest panelist here was TIME Magazine senior political analyst Mark Halperin, and he said to Governor Christie, “What have you heard from your fellow Republican governors and other leading Republicans at what would happen if Newt Gingrich were at the top of the ticket?” 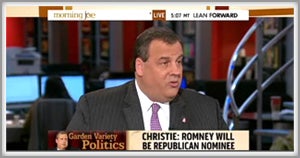 CHRISTIE: I think that the problem for us if Speaker Gingrich were at the top is that the election would be about Speaker Gingrich and not about the president. And I think as Republicans, this election has to be first and foremost about the president. And I think this Speaker just can’t help himself but to make himself the center of attention all the time with the comments that he makes. And as a result, even though while some of his ideas I think are fine, I think some of them aren’t, and, in the end, he’s gonna carry so much of that into election that, you know, the election’s gonna be about Newt Gingrich and I don’t think that’s a good thing for our party.

RUSH: This is the classic error that moderate Republicans make, the classic Republican moderate error. They think that being a moderate buys them something with the media. What Christie is saying here, “Oh, they won’t talk about Mitt. They won’t be mean to Romney. Romney won’t make the campaign about him. Romney is not an ego maniac. Romney is not gonna run around and say stupid stuff. Romney is a pretty bland guy, so with Romney as the nominee, everybody knows the campaign will be about Obama.” Really? That’s not how it works.

Now, if anybody knows anything at all about making one’s self-the center of attention, it would be Governor Christie. Governor Christie knows how to do it. Governor Christie likes being the center of attention, and he can handle it. So can Newt. But the idea that, “Well, we can’t have Newt because that means Newt’s all anybody will be talking about.” And see, the classic thing is, “We’ll nominate a moderate, media likes us moderates. The media likes us. They will not be mean to us.” It doesn’t work that way. Classic, classic Republican moderate error.