Can Tebow Beat the Steelers?

RUSH: We got somebody on the phone from Denver. It is Tony. Great to have you on the EIB Network, sir. Hello.

RUSH: Thank you very much, and same to you, sir.

CALLER: Rush, I hope you’re coming to Denver for the Broncos-Steelers game this weekend. Please, Rush, will you handicap the game? Tim Tebow (unintelligible) pull off the upset? 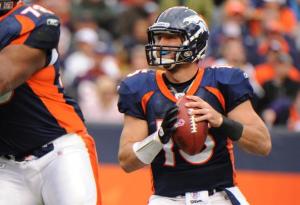 RUSH: This is gonna be a long shot. This is not the defense that you want coming to town if you’re the Broncos at this stage of Tebow’s development. Oh, it’s not gonna be pretty. The Broncos, they’re on a three-game tailspin here. This is the number one defense, number two defense in the league. There’s plenty of tape now on containing Tebow on the college-style option offense. Pittsburgh has great corners and safeties and defensive ends to containment. Anything is possible, and we get to the weekend, I might actually pick a couple games, point spreads. As of now, I don’t have plans to be in Denver.

CALLER: Well, Rush, the media hates Tebow because of his faith. The only way to make the media hate him even more is a picture of you standing next to him this weekend.

CALLER: Hey, Rush, thanks for taking my call. Love your show today.

RUSH: All right, appreciate it. (laughing) That’s true. The media, to be fair about this, at the outset was caustic and vitriolic toward Tebow back in the summer during the lockout when people were looking at Tebow working out on his own and supposedly not succeeding changing the throwing motion, he doesn’t have a quick enough release, all these things. And, of course, there was no question, the reason Tebow makes people uncomfortable is because he shows you your shortcomings. It’s no more complicated than that. It’s why the left doesn’t want any morality. They don’t want any judgments ’cause they will never measure up. If you look at the left’s heroes, sports or otherwise, they’re the people that are constantly getting in trouble, the bad boys, the guys crossing the line, the risk-takers.

Tebow’s dull, Tebow’s boring, plus he’s a Christian, he actually believes and they just don’t want someone like that doing well. Then they were overwhelmed by public opinion and the Broncos fan base, which clearly loved Tebow, wanted him to do well, and Tebow and the defense, the Broncos, got that team in the playoffs, barely, but they’re there, wouldn’t have happened probably had Tebow not taken over, and the media did start soft-pedaling their opposition. I commented on it on this program that there had been a 180 in many places of the sportswriter community, now writing favorably about Tebow and so forth.

But I’ve known that deep down they’ve been hoping for a major failure, an embarrassing blowout. And that’s what they’re gonna be hoping for this Sunday so that the Tebow experiment as a quarterback is finally over with. I’m talking about national sportswriter people, not people in Denver. There may be some in Denver, too. But it’s gonna be the Steelers defense, they’re gonna be minus some players, but most of the Steelers’ injuries are on offense. So this has a chance not to be pretty.