RUSH: I mentioned Rick Perry earlier. He’s out doing the media rounds today, and he’s sounding good — and he had a great exchange with Mike Allen of Politico. Everybody that says, “Ah, Perry is a nice guy, but he looks slow, Rush.” I can’t tell you the number of people, wherever I go, whose number one complaint about practically every Republican hopeful is that somebody thinks they’re stupid or that they sound stupid or that they talk stupid, or that they talk dumb. It’s really a powerful, influential thing that has happened here. Some people tell me, “You know, I love Rick Perry but the Bushies hate him, and he sounds stupid, sounds so slow. Rush, I’m embarrassed to tell people.” And, if they say that about not about Perry, they’ll say it about somebody else. 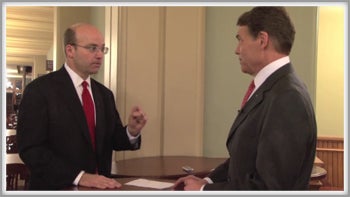 But these people are not “stupid.” They wouldn’t be where they are if they were stupid. There are just different standards now that people are being measured against. Now, Perry… this is not stupid. This is actually pretty funny and pretty smart. Mike Allen of Politico was talking to Perry and performed a usual media trick. (summarized) “Hey, you know, there are members of your staff, and they’re talking about how stupid your campaign is, Governor Perry, and they’re talking about how dumb your campaign is — and these people are your staff, Governor Perry — and they’re blaming your campaign, and the people who run it, for where you are right now in the Hawkeye Caucus.” Mike Allen said, “Governor, some of your staffers have told us that you ran this as a gubernatorial campaign for too long. You didn’t look big enough; you didn’t get big enough fast enough. Do you take some responsibility for that?”

And Rick Perry said, “I don’t know who you’re talking about. So I can’t respond unless you give me a name.” And Mike Allen said, “Well, these are members of your staff.” And Perry said, “You got a name?” And Mike Allen, “These are members of your staff who say…” Perry said, “You got a NAME?” There’s a pause and Allen says, “You won’t listen to…?” Perry says, “You got a NAME?” Allen says, “Uh, uh, uh.” And then Perry says, “If you don’t have a name to tell me this individual said this, then I don’t think that’s a corroborating source. You give me a name.” Now, this is not stupid. That’s pretty clever. “Okay, you’re gonna tell me that some unnamed member of my staff is ripping my campaign? Who? You tell me who it is and I’ll give you an answer.” The implication is: “I think you’re making this up. You’re a journalist, and you can run out and you can say that somebody said something. 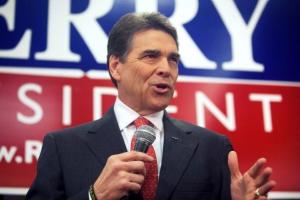 “Why should I respond to some nameless person? Why should I?” This is something, by the way, that’s one way. This is a one-way street. The media never does this with Democrats, and I remember back in the early days of this program, late eighties, into the nineties (and so much of it was learning experience of how to deal with the media) and I got this question all time. “You know, your critics say…” and I later learned that that is a device. It’s a journalistic device that’s taught in journalism schools. There doesn’t have to be anybody “saying” anything. The journalist can simply think something and then put that in the mouth or in the words of some person who doesn’t exist and say it’s “a critic,” some critic. “You know, Mr. Limbaugh, ‘your critics’ say that you believe blah, blah, blah.”

“Well, why should I respond to what the critics say?” Early on I did it because I thought I’d be nice, be fair, and the media will respond in kind. That’s not at all what’s the case. They don’t care. They don’t want to like Republicans or conservatives. It’s all a gotcha game from the moment they get up to the moment they go to bed. It’s all a gotcha and Perry figured this out: “You tell me who it is and I’ll react to it. Without a name, you’re not gonna get a response,” and that’s not somebody stupid. That’s not somebody that’s intimidated by what is happening, here. In fact, it’s actually a sign of somebody that is learning and figuring out how to deal with stuff — and you know me, folks. There nothing wrong with constantly learning. I love it.

I’m constantly learning. I know many of you think that there’s not much I have left to learn, but that’s not true. (interruption) No, everything is “on the job.” I don’t care who is elected president next time around, but whatever Republican wins the White House, it’s gonna be on-the-job training, but whoever’s gonna do it has never done it before. It’s gonna be on-the-job training. There’s no question. That’s why you go for somebody who’s principled! That’s why you go for somebody… Look at Santorum. Everybody says, “Why is Santorum surging in Iowa?” Well, the answer may be found in the fact that the economy is not the number one issue. So Santorum is allowed to play to his strengths, and his strengths are values and principles, social issues — the things that the Republican establishment despises. The areas of a campaign that they hate.

But that’s his strength, and he’s staying focused on his principles — and that may explain why he’s doing well. It could well be. Principle will trump inexperience every time it’s tried. But it’s people who are trying to play the game that get caught up in the game and oftentimes make mistakes. It’s the calculators. It’s the people who are insincere, who are not governed by principle. A good analogy is public speaking. If you know what you’re going to talk about, you do not have stage fright. If you’re confident in what you’re going to talk about, you don’t have stage fright. In fact, you can’t wait to get out there and start talking. But if you have any doubt (self- or otherwise), if you’re not confident, if you’re gonna be talking about things you really don’t care about and you’re gonna be acting, well, you’re gonna be nervous.

If you’re gonna try to hide something from a bunch of journalists or other people you’re going to be nervous. That’s why I always say that it’s just safer to stick to your principles, ’cause that’s who you are. Stick to your core. But the journalist trick is the thumb suck. In practically every story, it reads: “Some say…” or “Some people say…” and it’s rooted in this notion, “Well, we gotta get both sides.” Okay, so here’s Rick Perry doing XYZ, and, “Some say, Mr. Perry…” “Who says this?” And what he’s saying. “Who? You give me a name and I’ll react to it,” but, “Some say…” it’s taught. Just like lawyers are taught questions in law school once they get into trial, journalists are taught this. They’re taught how to destroy people. They’re taught how to do the personal profile destruction, the personal profile buildup.

They’re taught the suck-up, the thumb suck. They’re taught it all. And none of it is about finding the news! This is no news. In fact, what news has come out of Iowa? The news media is going wall-to-wall out of Iowa. What news has been made in Iowa today? None. Everything’s on the come. It’s all gonna happen tonight. Nobody knows what the news is yet. So what’s the focus? Well, what the “experts” think, but nobody knows.

RUSH: I mentioned earlier, ladies and gentlemen, Rick Perry and the way he dealt with Mike Allen who came up to him, (paraphrasing) “Hey, some staffers say that you’re not really smart. Some staffers are saying that the campaign is stupid and late,” and so forth, and Perry said, “Well, who? I’m not gonna respond to this ’til you tell me who’s saying this.” By the way, Perry is on a full-court press today, yesterday. Perry’s out doing interviews. I saw him on Fox early today and he came across great. Perry has always made me laugh. Rick Perry has always made me smile. I look at Rick Perry speak and I smile, sometimes I laugh. I’ve met Rick Perry a couple times, and I’ve enjoyed it thoroughly both times. I like Rick Perry. I love Santorum. I like Bachmann. I like all these people and I know that any one of ’em would be great for this country.

What we’re famous for in the Hawkeye Cauci is surprises. One of the biggest surprises in recent years is Howard Dean. Howard Dean, it was thought going into the Hawkeye Cauci in 2004 that he was gonna clean up in Iowa, and he didn’t. He barely came in third place and it was over, and everybody was shocked. I tell you, everybody could not believe it. The polling data didn’t indicate this. Howard Dean was the guy. And when that happened, the Democrats panicked and they went to Kerry, who served in Vietnam, John Forbes Kerry, the haughty John Kerry. They said, “Well, we gotta have somebody that can win now,” and they did that to themselves. “Okay, we need somebody that can win.” So they chose somebody on the basis of the stupid notion of electability. It’s not a stupid notion, but when that’s the only reason you pick somebody, it’s stupid. And that’s what they did.

Anyway, I’ve got the sound bite now of Rick Perry. This was Sunday in Des Moines, and this is The Politico White House correspondent Mike Allen interviewing Rick Perry. He says to him, “Governor, some of your staffers have told us that you ran this as a gubernatorial campaign for too long, that you didn’t look big enough, you didn’t get big enough. You take some responsibility for that?”

PERRY: (echo) I don’t know who you’re talking to.

ALLEN: Well, these are members —

PERRY: So I can’t respond unless you give me a name.

ALLEN: These are members of your staff —

PERRY: If you donÂ’t have a name to tell me this individual who said this, then I don’t take that as a corroborated source.