RUSH: Now there’s a mantra — there’s mantra out there — and it’s even now spread to CBS News: “Will Santorum’s big government conservatism resonate?” It’s everywhere, folks. “Santorum’s big government conservatism.” Have you ever heard “big government conservatism” associated with Rick Santorum before today? Have you? Have you? All right, very rarely. Some of you might. In Pennsylvania in some of his campaigns it might have been said, but nationally most people are hearing this for the first time after he wins the Hawkeye Cauci. Now, it started (at least I first saw it) in conservative media and then The Cato Institute, which is Libertarian. Now CBS News has it. So let’s talk about this for a second. 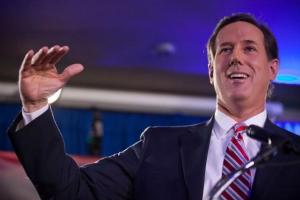 I remember in the early days of this program, one of the things that I said when I was actually in the process of introducing myself to the audience, explaining my views and so forth. I remember saying… I’m gonna have to paraphrase myself; I don’t have the exact quote in front of me ’cause I’m going back to 1988 or ’89 now, maybe 1990. But I said, “In certain things, conservatives actually do like a big government. For example, conservatives do want an activist government defending what’s right and attacking what’s wrong.” Big government may not be the term, but, for example: Conservatives do think that it’s the role of government to protect the sanctity of life, as does Rick Santorum. If government doesn’t, who else will? And it stems from our founding documents: Life, liberty, pursuit of happiness. The Declaration of Independence.

RUSH: Let me give you an example here on this big government garbage. Here is more from the CBS story about Santorum. “Santorum’s voting record shows that he embraced George BushÂ–style ‘big-government conservatism.’ For example, he supported the Medicare prescription-drug benefit and No Child Left Behind. He never met an earmark that he didn’t like. In fact, it wasn’t just earmarks for his own state that he favored, which might be forgiven as pure electoral pragmatism, but earmarks for everyone, including the notorious ‘Bridge to Nowhere.’ The quintessential Washington insider, he worked closely with Tom DeLay to set up the ‘K Street Project,’ linking lobbyists with the GOP leadership.”

Now, let me tell you something. Let me tell you what all that’s about. The Democrats own all of that. What Rick Santorum and DeLay were trying to do was disempower the Democrats’ bureaucrat lobbying reach into Washington. They were trying to get an equal foothold. It’s the way the game is played. For all of us who are devoted to ideas, God bless us, but it is money that makes that town turn. It’s money that makes that town run. It is money that motivates most people to want to be in that town. It’s money that motivates most people to want to win elective office. It’s being in control of the federal budget that is the great carrot that’s dangling in front of everybody’s eyes because that’s the power.

Now, the Democrats own this.

Everybody talks about “special interests,” and somehow the special interests only end up on the Republican side. All these wealthy fat cats, it’s always Republicans. The Democrats are these famous, clean and pure as the wind-driven snow. They don’t have any big bucks donors. They don’t have any big bucks members. It’s a crock. It’s the exact opposite. The big money is the Democrat Party. Santorum, DeLay, all these others who got in on this were trying to break that up — and so now the long knives are out for Santorum; and I guarantee you: The fact that the media and the Democrats are trying to associate Santorum with “big government” is an indication of something very important.

They know that it can kill a conservative’s chances, and that it resonates. People do not want big government is what this means. It means now that the Democrats today are taking Santorum seriously and some even on our side who are now taking him seriously, think that they can discredit Santorum by attaching him with this big government idea. Because it’s a killer, particularly with the Tea Party and with conservative Republicans. So this is a full-fledged effort here to discredit Santorum with what’s essentially a lie, because there are many different kinds of big government. The irony of the left using the idea of “big government,” a term that they have completely discredited to try to smear a conservative!

We don’t believe in no government. We never have believed in no government! There has been an attempt for decades to equate conservatism with no government. That’s Ron Paul. That’s the Libertarians. We’re fully aware as conservatives government has a role. It has a central role in many things: Enforcing the law, defending freedom, defending and protecting the Constitution, freedom and liberty; life, liberty, purest of happiness. If government doesn’t do it, who will? But that is not to say — and that certainly is not the case for Santorum to say — that big government, that we believe in redistribution, high taxes, creating dependence, higher welfare, higher unemployment.

If big government anything was a winner, then they’d be running around calling Obama a big government guy, not Santorum. What’s Obama doing? Obama’s trying to make himself out to be not a big government guy! Democrats can’t win being who they are. We’ve said this over and over again. They cannot win being honest. We conservatives, and this is true of Santorum, believe in a strong government, strong military, strong and just courts, strong law and order. But we don’t believe it has to be “big.” It does not have to be a leviathan. Where’s the CBS News attack on Obama for being a big government guy? Where is it? It’s not there — and the reason is it’s a killer, and that’s why they’re trying to tie it to Santorum.

That’s what they’ll try to do, because they are scared of the social issues, too. So in matter of a few hours, look at how all this has changed — in a matter of just a few hours — which of course is why I, El Rushbo, refuse to get depressed and down in the dumps about the Republican field and where it was headed and that’s the reason I didn’t get behind anybody because too much can happen. Things can change on a dime and the unexpected (by definition) is going to happen in politics more often than not; and history can tell you that after the first election, be it a caucus or a primary, you’re gonna have people that are out of it. The first official declaration that they have lost, where do they go? Certainly not into debt so they get out of the race.